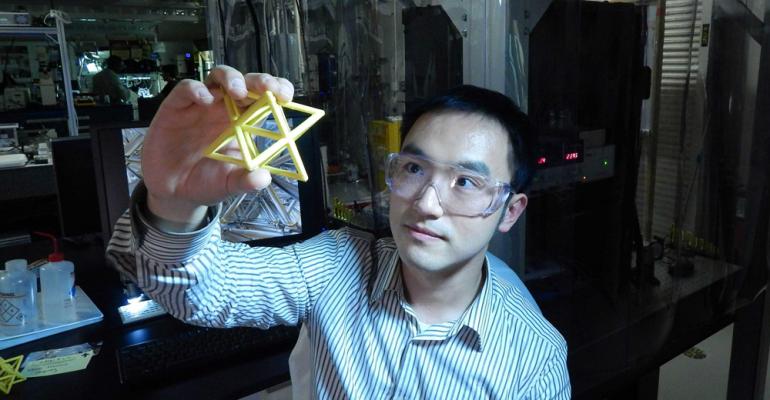 It's the Muhammad Ali of materials, floating like a butterfly and stinging like a bee. Researchers at Lawrence Livermore National Laboratory (LLNL; Livermore, CA) and Massachusetts Institute of Technology (MIT; Cambridge, MA) have developed a material with the same weight and density as aerogel—a material so light it's called "frozen smoke"—with 10,000 times greater stiffness.

It's the Muhammad Ali of materials, floating like a butterfly and stinging like a bee. Researchers at Lawrence Livermore National Laboratory (LLNL; Livermore, CA) and Massachusetts Institute of Technology (MIT; Cambridge, MA) have developed a material with the same weight and density as aerogel—a material so light it's called "frozen smoke"—with 10,000 times greater stiffness. Produced using an additive micromanufacturing process, this material could have a profound impact on the aerospace and automotive industries as well as other applications, including medical technology, where light weight, stiffness, and high-strength properties are desirable, notes a press release distributed by LLNL. A paper detailing the findings has been published in a June 20 article in Science.

The so-called micro-architected metamaterials—artificial materials with properties not found in nature—maintain a nearly constant stiffness per unit mass density, even at ultralow density.

Lightweight cellular materials typically have mechanical properties that degrade as density is reduced because their structural elements are more likely to bend under applied load. Metamaterials, however, exhibit ultrastiff properties across more than three orders of magnitude in density.

"These lightweight materials can withstand a load of at least 160,000 times their own weight," said LLNL Engineer Xiaoyu "Rayne" Zheng, lead author of the Science article. "The key to this ultrahigh stiffness is that all the microstructural elements in this material are designed to be overconstrained and do not bend under applied load."

Stents and tissue scaffolds are among the potential medical applications of this novel material. "We have implanted structures similar both to scaffold and drug-delivery vehicles to facilitate bone regeneration in frogs," LLNL Engineer Chris Spadaccini and MIT professor and key collaborator Nicholas Fang told PlasticsToday. "We plan to explore cardiovascular stents using these lightweight and stiff materials. In addition, these architected materials can be designed for a variety of medical applications such as wound care, where the mechanical properties of the surrounding tissue can be matched yet the porous nature of the material will allow for flow of nutrients," they added.

The material properties are achieved through a geometric layout, rather than via chemical composition, thanks to a projection microstereolithograpy fabrication process, the researchers explained. A micromirror display chip is used to additively produce high-fidelity 3D parts from photosensitive feedstock materials. The resulting complex microscale geometries would be challenging and, in some cases impossible, to achieve by means of other techniques.

"Now we can print a stiff and resilient material using a desktop machine," said Fang. "This allows us to rapidly make many sample pieces and see how they behave mechanically."

The team was able to build microlattices from polymers, metals, and ceramics. The researchers used polymer as a template to fabricate the microlattices, which were then coated with a 200- to 500-nm-thick metal film. The polymer core was thermally removed, leaving a hollow-tube metal strut, resulting in an ultralightweight metal lattice material.

The team repeated the process with polymer microlattices coated with ceramic to produce a thin-film coating about 50 nanometers thick. The density of this ceramic micro-architected material is similar to aerogel.

"It's among the lightest materials in the world," said Spadaccini. "However, because of its micro-architected layout, it performs with four orders of magnitude higher stiffness than aerogel at a comparable density."

The plastic used by the team is a diacrylate formulation—1,6-hexanediol diacrylate and polyethylene (glycol) diacrylate, Feng and Spadaccini told PlasticsToday. "These [materials] cure fast under UV exposure—typically less than 0.3 seconds for each layer without an absorber—and have an elastic modulus in bulk of 20 to 50MPa."

The team also produced an ultrastiff micro-architected material using a slightly different process. They loaded a polymer with ceramic nanoparticles to build a polymer-ceramic hybrid microlattice. The polymer was removed thermally, allowing the ceramic particles to densify into a solid. The new solid ceramic material showed similar strength and stiffness properties.

The LLNL-MIT teams' new materials are 100 times stiffer than other ultralightweight lattice materials previously reported in academic journals, according to the researchers.