The combined annual capacity of the PET production units being purchased is 675,000 tons, while the PTA unit's annual production capacity is 600,000 tons. Ricky Lane, director of corporate communications at DAK told PlasticsToday that post-acquisition capacities for the company will be more than 1500 kilotons of PET and over 1100 kilotons of PTA.

The transaction also includes intellectual property around Eastman's IntegRex PET and PTA technologies. Lane said that his company will completely evaluate Integrex once the deal closes and all the details of the technology are fully disclosed, seeing how it fits in with DAK's own proprietary technology. "It is about taking the best of each to improve the operation of all our assets and bring the best to our product offerings," Lane said.

PET manufacturers have been hit by the untimely confluence of over capacity and weakening demand, with many brand owners shifting towards thin-walled PET containers in the key water bottle market. As the bottled water market dries up, however, new opportunities are arising in markets like carbonated soft drinks, juices, sports drinks, and alcoholic beverages, thanks to advances in barrier technology.

Lane characterized the PET pricing market as volatile, resulting from unsettled prices for key feedstocks. "Generally, prices follow movements in raw materials, and recently raw materials have been more volatile and on the rise due to increases in crude oil prices, and increasing global polyester fiber demand," Lane said. 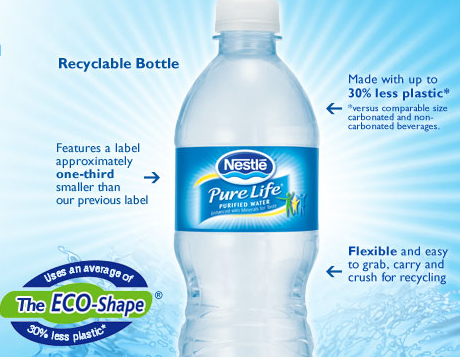 growth rate (CAGR) of 6.5%, with the market forecast to be worth $42 billion by 2013. Expansion here will have to offset weakening demand from water bottles.

Nestlé Waters introduced its Eco-Shape bottle at the end of 2009, as part of its plastic reduction goal, with plans to lightweight its half-liter single-serve bottles by an additional 15% by 2010. This next-generation bottle weighs 9.3g on average and contains 60% less plastic than Nestle's original half-liter PET bottle, first introduced in the mid-1990s.

Nestlé competitor Coca-Cola Co., through its Dasani brand, has reduced its water bottles' weight by 30% since the brands inception. It is also incorporating recycled content into new bottles, further displacing virgin resin, having opened what it calls the world's largest bottle-to-bottle recycling plant in Spartanburg, SC, with an annual capacity of 100 million lb. It has also launched the Plant Bottle, based on bioplastics. At DAK, Lane said his company expects the lightweighting to continue.

Global realignment of PET continues
Eastman's restructuring of its PET business goes back to 2007, when in the second quarter, it sold its San Roque, Spain PET manufacturing facility. In the first quarter 2008, sold its PET and PTA manufacturing sites in Rotterdam, the Netherlands, as well  as its PET manufacturing operation in Workington, UK.

Eastman reported in its third quarter 2010 earnings statement that operating earnings in the related segment had increased to $6 million from a loss of $8 million in the year-ago time frame, due to improved IntegRex operations and higher selling prices, which offset higher raw material and energy costs.

On March 1, 2010, Eastman actually announced a lawsuit against DAK Americas, claiming unauthorized use of its IntegRex PET technology. Eastman filed its complaint in the U.S. District Court for the District of Delaware, alleging patent infringement of three Eastman patents that represent a portion of the IntegRex technology patent portfolio. A little over a month later, Eastman announced that it was considering divesting its PET operations. —PlasticsToday Staff