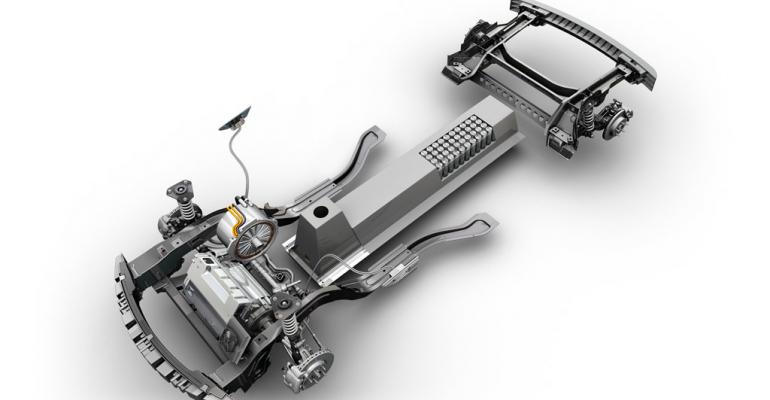 The Automotive Division of the Society of Plastics Engineers International (SPE, Newtown, CT) held its 41st Annual Automotive Innovation Awards Gala in Livonia, Michigan, recently. More than 40 parts were entered in the competition and for the third year running, a part using BASF plastics won the Powertrain category.

The Automotive Division of the Society of Plastics Engineers International (SPE, Newtown, CT) held its 41st Annual Automotive Innovation Awards Gala in Livonia, Michigan, recently. More than 40 parts were entered in the competition and for the third year running, a part using BASF plastics won the Powertrain category.

General Motors Company (GM) was awarded the innovation award in the Powertrain category for the battery pack in the 2011 Chevrolet Volt extended-range electric car, beating out competitors such as Sanyo. GM, Mann + Hummel (Portage, MI) and BASF (Ludwigshafen, Germany) collaborated on the battery cell frames, combining their material and design expertise.  The battery requires 135 cell frames, which must maintain both dimensional stability and hydrolysis resistance over the lifecycle of the battery. Both cost and weight were saved through designing the part utilizing Ultramid 1503-2F polyamide, a hydrolysis resistant PA 66, 33% glass-reinforced resin. The weight savings provides additional performance benefits in the form of extended range in comparison to a similar design in metal. Because of Ultramid's quality and BASF's production control, Mann + Hummel can replicate tight tolerance parts time after time. Maintaining dimensional stability across the cell frames was critical for both the assembly and the long-term performance requirements of the application. The company's declined to comment on how exactly this was achieved, citing confidentiality.

In a set-back for the Volt, however, the National Highway Traffic Safety Administration (NHTSA, Washington, DC) has opening a safety defect investigation of Chevy Volts, which could experience a battery pack-related fire following a crash. Testing in May designed to measure the vehicle's ability to protect occupants from injury in a side collision damaged the vehicle's battery while the coolant line was also ruptured. When a fire involving the test vehicle occurred more than three weeks after it was crashed, the agency concluded that the damage to the vehicle's lithium-ion battery pack during the crash test led to the fire. During battery pack-specific tests conducted in November in an effort to recreate the May test, one test resulted in the emission of smoke and sparks, while a battery pack tested on November 17 eventually caught fire on November 24. A third test resulted in a temporary increase in temperature.  The official statement from the NHTSA can be found here.

Speaking to the Associated Press, GM CEO Dan Akerson insisted that the cars are safe, but said the company will purchase the Volts because it wants to keep customers happy. Akerson said that if necessary, GM will recall the more than 6,000 Volts now on the road in the U.S. and repair them once the company and federal safety regulators figure out what caused the fires.-[email protected]