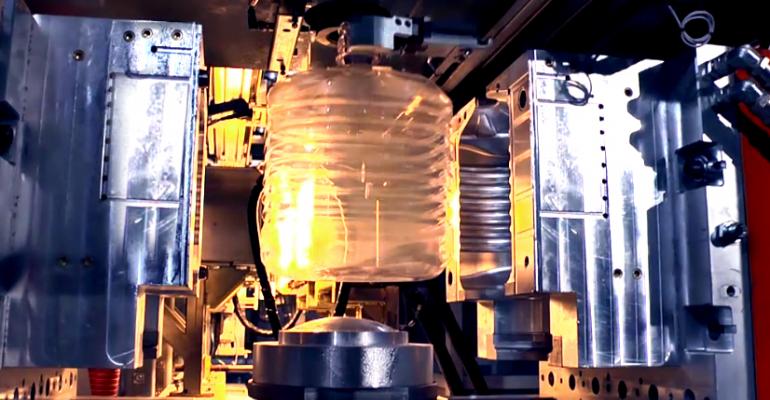 It’s a staple in the workplace and synonymous with people gathering together to discuss last night’s season finale of the latest show. And now the water cooler is getting a green makeover with its new collapsible packaging design to improve collection efforts for recycling.

It’s a staple in the workplace and synonymous with people gathering together to discuss last night’s season finale of the latest show. And now the water cooler is getting a green makeover with its new collapsible packaging design to improve collection efforts for recycling.

It’s highly likely that if you have a water cooler in your house or workplace, it’s a large PET dispenser bottle which is much lighter than traditional glass versions, which weigh close to 20 kg in their five-gallon versions. A regular multi-trip PET dispenser bottle—when it sits on a dispensing unit that has a refrigeration system incorporated into it—weighs around 650 g by contrast.

A recent trend has been to switch over to single-use PET dispenser bottles, which weigh even less, at a minimum weight of 330 g. This cuts back on materials, as well as on transport costs. But the bottles still take up a lot of space. The best type of single-use bottle is one that collapses on itself as the water is consumed, ending up as a fat disc that takes up much less room than the original.

However, it’s not that easy. Bottles often breakdown in a lopsided fashion, leaving lots of space inside even when they are completely empty of water. So, PET packaging technology producer Sipa (Vittorio Veneto, Italy) has been collaborating with various customers into developing designs for large PET dispenser bottles that are fit for purpose in transport and use, and which collapse on themselves as neatly as possible as the water levels go down.

(FEM) analysis to locate the buckling mechanism that would best suit the client’s requirement. “FEM analysis accelerates the time of investigation and reduces the number of trials aiming at the correct solution,” says Dino Zanette at Sipa. “It also aids in determining a minimum weight at which the collapsing mechanism is still functional.

Various bottle shapes, square and round, were analyzed along with the shape of the ribs and base. Graphs of volume vs. pressure and base center displacement vs. pressure, together with photograms of the simulation, helped the Sipa experts to better understand the collapsing phenomena and how to modify the bottle structure to get the best performance. Physical prototypes were constructed to verify the “virtual” results.

Trials have proven the reproducibility of the collapsing mechanism that was examined during the development stages. So now, fully self-collapsible containers that require the application of no external mechanical forces to deflate are currently in industrial production. This makes the job of collecting them for recycling or simply putting them in a recycling bin much easier than before.

Sipa has specialized for more than 25 years in complete manufacturing lines, including molds, for PET containers. It has production operations in Italy and China. The company's offering includes preform and bottle design, engineering and industrialization up to the supply of injection and blowing molds for any type of PET machines in the market.