Back in the 1960s, there was a very popular poster that had a childlike drawing of a flower with the words, "War is not healthy for children and other living things." It's hard to argue with that, but, in one respect, war does have a positive impact on the human condition.

Back in the 1960s, there was a very popular poster that had a childlike drawing of a flower with the words, "War is not healthy for children and other living things." It's hard to argue with that, but, in one respect, war does have a positive impact on the human condition. I was reminded of that the other day, when I came across an article on the Israel 21c website, which posited that Israel's rather remarkable track record in medical technology innovation is partly a result of its "existential need for innovation in the military." 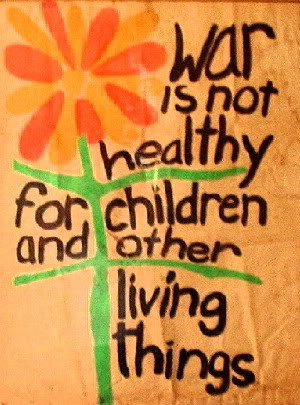 On Forbes' top 10 list of health tech companies changing the world in 2014, six were based in Israel. According to government figures, cited by the Globe and Mail newspaper, there are 725 medical device companies operating in Israel (which is more than half of the 1380 life science companies.)

Among the medical innovations "born of conflict" cited by Israel 21c are the PillCam from Given Imaging, a swallowable capsule with video cameras that films intestines without the need for endoscopy—the breakthrough device applies miniature missile-guiding technology—and the Emergency Bandage, which has a built-in pressure bar to stop bleeding. The bandage was so effective in saving the lives of U.S. soldiers that it became known as the Israeli Bandage in the North American market, writes Israel 21c.

But Israel, by no means, is alone when it comes to mining medtech innovation on the battlefield; the U.S. military also has a few wins under its belt.

Stopping the bleeding in novel ways

Preventing blood loss is one of the highest priorities of combat care: Severe hemorrhage is the leading cause of battlefield death, according to military authorities. The trusty tourniquet has been around for centuries, but it got a significant upgrade with the invention of the one-handed tourniquet in 2002 in Afghanistan. The Combat Application Tourniquet (CAT) is now a standard component of the soldier's Improved First Aid Kit and is being used for civilian care, as well.

A more recent breakthrough in hemorrhage control is the XStat device from RevMedx Inc. (Wilsonville, OR). The device is designed to treat gunshot and shrapnel wounds by injecting dozens of small sponges into the wound cavity using a syringe-like applicator. In the wound, the sponges expand and swell to fill the cavity within 20 seconds of contact with blood, creating a temporary barrier to blood flow and providing hemostatic pressure. Speaking with New York magazine, RevMedx CEO Andrew Barofsky noted that the XStat "represents a totally new way to treat these types of wounds. Bullet wounds have long been treated with gauze and externally applied pressure, but instead the XStat uses sponges to apply internal pressure and absorb blood much more quickly."

Depending on how you define it, telemedicine has been around for decades, and NASA has played a significant role in its development. The use of telecommunication and information technologies to provide clinical healthcare at a distance has obvious value for a space program, but military applications also benefit greatly, and the U.S. Army has expanded its use globally.

The Army Telehealth program, for example, provides clinical services across the largest geographic area of any telehealth system, civilian or military, according to the U.S. Army. In fiscal year 2014, Army clinicians completed more than 33,000 patient encounters and provider-to-provider consultations in more than 30 specialties, the Army reports on its website.

Despite regulatory hurdles and pushback from the more conservative elements of the medical community, telemedicine continues to make inroads in civilian care across the country. It's undeniable, however, that its most profound impact is in remote areas of the country, where the nearest medical specialist may be hundreds of miles away, and in parts of the developing world that lack a robust healthcare infrastructure.

The EpiPen, the auto-injector that administers a dose of epinephrine to combat allergic reactions, also has its origins in military technology. Former NASA engineer Shel Kaplan invented the ComboPen, an auto-injection device that the military used to deliver an antidote to a nerve agent. Kaplan later modified the design to deliver epinephrine in the civilian population.

To quote another iconic phrase from the Vietnam era: "War, what is it good for? Absolutely nothing." Well, despite the destruction and lost lives, war also contributes to advances in medical technology. And that ain't nothing.

This is an admittedly partial list of medical technology that has been forged in combat. Do you have some more examples? Send them to me, and I will be happy to share them with the PlasticsToday community.