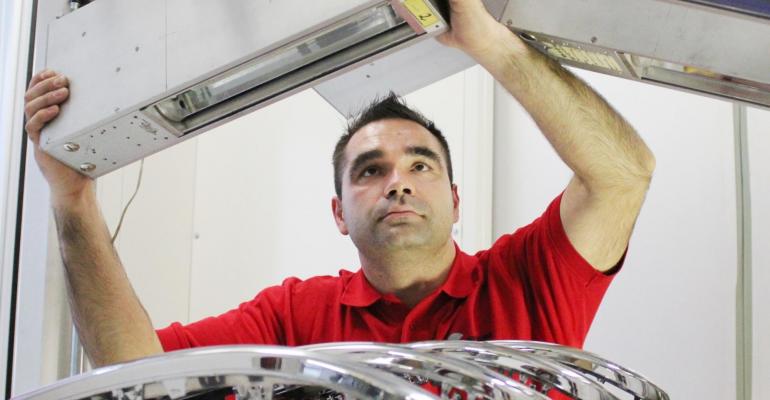 Today, plastic parts account for 15 to 20% of a car's weight. Many of these are exterior and interior parts which are provided with their respective visual, haptic and functional characteristics by means of a paint coating. The painting technology industry is responding to ever stricter demands with regard to quality, economy and the efficient use of resources with new solutions and further developments.

Today, plastic parts account for 15 to 20% of a car's weight. Many of these are exterior and interior parts which are provided with their respective visual, haptic and functional characteristics by means of a paint coating. The painting technology industry is responding to ever stricter demands with regard to quality, economy and the efficient use of resources with new solutions and further developments.

In order to compensate for increasing vehicle weight due to electric drives and fuel-efficient engine technology, the proportion of lightweight parts will increase from 30 to roughly 70% by 2030 - this is the prognosis of a current McKinsey study. In addition to high-tenacity steels and light alloys, plastics are also playing an important role in this respect. They often make it possible to manufacture components of minimal weight and/or to produce parts less expensively, or to integrate the functions of several workpieces into a single component.

By means of painting, plastic parts are provided with protection against mechanical, chemical and physical influences such as scratches, stone chipping, weathering and UV radiation, as well as ingredients used in cosmetics and cleaning agents. However, paints and coatings are significantly more than just technical utilities: they create surfaces which are appealing to all of the senses, generate an emotional link to the product and increase its worth. The quality of the coating has to fulfill very strict requirements in order to assure that this alluring effect on the human senses is properly achieved. At the same time, global competitive pressure necessitates more and more economic, sustainable and flexible painting processes. The painting industry is working continuously on optimizing existing solutions and developing new ones to this end.

More productivity through fewer painting steps
The trend towards fewer steps in the painting process with the help of filler-free painting systems is enjoying more and more popularity - for components included in body styling kits made of plastic as well. With good reason: Eliminating the intermediate drying step reduces energy consumption by 15 to 20%. At the same time, material consumption and solvent emissions are also reduced. Beyond this, less production floor space is required for the painting system. Corresponding painting solutions are available for, amongst other components, high-gloss injection molded interior parts such as trim molding made of an ABS-PC blend (ABS: acrylonitrile-butadiene-styrene, PC: polycarbonate). With just a single-coat painting process, the paint provides components with a distinguished, high gloss finish. Even greater potential savings are offered by an innovative two-component paint system which makes it possible to paint components made of polypropylene (PP) and thermoplastic polyolefins (TPO) without the need for pre-treatment or a primer. After applying the single coat of paint, the parts demonstrate excellent UV stability, as well as resistance to scratching and chemicals, not to mention sun creams and mosquito repellents. Two-component paint is currently the only paint coating system in the world which fulfills the specifications of the automobile manufacturers for painting interior parts made of PP and TPO without pre-treatment/flaming and primer (only corresponding product in the GM MATSPC list and Toyota's TSH 3130G - for all classes). It has also been approved for worldwide use by GM in accordance with the new GMW 14867 standard. Toyota has already been using two-component paints for quite some time for painting interior Aurion parts.

UV technology on the advance
UV paints cured under ultraviolet radiation combine ecological and economic advantages, for example shortened processing times and smaller painting systems, as well as reduced emissions and energy consumption. These benefits are augmented by qualitative aspects for the painted surfaces as well such as higher gloss levels, durability and resistance to scratching.

A solvent-free, 100% UV-curing clear coat has recently been made available for coating plastic interior parts made of ABS (acrylonitrile-butadiene-styrene), which fulfills the factory standards of various OEMs (Renault, TL 226 Volkswagen, DBL 7384 Daimler). Corresponding tests have revealed that considerably better resistance to scratching is achieved with this 100% monocure system than with the aqueous or solvent-containing systems, as well as the dual-cure systems, which are currently in use. Curing takes place in an atmosphere with reduced oxygen content - so-called inert gas curing - at room temperature in a matter of just a few seconds. The oxygen reduced atmosphere prevents that radicals which are necessary for polymerization react with the oxygen of the air and thus the occurrence of so-called oxygen inhibition. This allows for enlarging curing distances, and areas which are less exposed to the UV radiation are homogeneously hardened.

So far, solvent-based and waterborne paints have been used in most cases for coating plastic parts in the automotive industry. Solvent-based dual-cure UV-systems are also in use for some years. They allow for good delustering and metallic hues. However, it's not possible to produce all metallic hues with UV-curing paints. Two-coat systems are available for these applications, which are comprised of a waterborne base coat and a UV-curing clear coat. 100%-UV-curing clear coats with piano-lacquer look, as well as 2-component dual-cure systems, have recently been used to an ever greater extent for painting plastics, with the former demonstrating significantly greater resistance to chemicals. Good adhesion values are achieved without pre-treatment on many common plastic substrates such as ABS, SAN (styrene acrylonitrile), PS (polystyrene) und ABS/PC (polycarbonate). Otherwise, adhesion characteristics can be optimized as a rule by activating the surface with the help of a flaming process.

In vogue: Combination surfaces
Plastic surfaces with the chrome-look are still in great demand. Plastic components are chrome plated by means of either conventional electroplating or PVD coating. Conventional pigmented systems and UV-curing paints are available for protecting the metal layer after the coating process, and for providing it with an individualized appearance.

Effective pre-treatment
Cleaning and pre-treatment of the plastic components is decisive for good painting results. Traditionally, a power washing system with an aqueous cleaning agent and a downstream retained water dryer are used to this end. However, this cost, space and energy intensive variant is being replaced more and more frequently with alternative cleaning processes such as CO2 snow-jet cleaning, plasma processes or a newly developed steam cleaning method.

CO2 snow-jet cleaning has established itself in numerous applications in the automotive industry and the automotive supply sector. The non-toxic, inflammable snow made of recycled carbon dioxide removes particulates and film-like contamination from exterior and interior parts made of various plastics and composites, and is gentle on the material. It also makes it possible to reliably remove contamination from very small gaps. A further advantage of the dry process results from increased freedom in designing the respective components because, for example, water retaining geometries no longer carry media over into the painting process.

Plasma processes, which are broken down into low-pressure and atmospheric-pressure plasmas, are used primarily for the removal of thin layers of inorganic contamination. The surface is simultaneously cleaned and activated during plasma treatment. This dual function is based on the physical and chemical characteristics of the process. In addition to a clean surface, increased surface tension is achieved in this way as well, thus assuring ideal conditions for the downstream painting process.

Good results obtained with steam cleaning for the removal of many types of contamination such as oil, grease, release agents, dust and fingerprints is based on the interaction of saturated steam with a high-speed air jet. Steam is generated by means of a flow heater: pressurized water flows through a tubing system which is equipped with heater coils, and is heated up to a temperature of between 135 and 280°C, depending on the cleaning task. The amount of liquid contained in the steam can also be matched to the cleaning task, as well as the type of contamination. For example, wet steam is used to remove oil, which changes the viscosity of the oil such that it is atomized into extremely fine droplets. These are then blown off of the surface of the part, along with particulate contamination, by the air jet. The high-speed air jet is also used for drying.