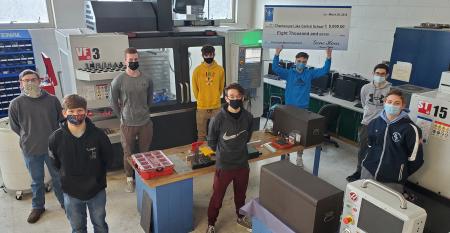 How One Plastics Professional Sparked a Passion for Manufacturing at His Local School
Jun 18, 2022
Jamestown Plastics CEO Jay Baker helped to steer a STEM-inspired lunch program into a full fledged manufacturing curriculum for students...

Talent Talk: Time to Buy in the Labor Market
Jun 18, 2022
Expect the coming recession to top out in the 5 to 6% range, and there probably still will be more job openings...

Improving Supply-Chain Visibility a Top Priority for Manufacturers, Survey Says
Jun 06, 2022
An overwhelming 88% of manufacturers want to thin their supplier pool, according to a survey by on-demand digital manufacturing company Fictiv.

Talent Talk: The Pandemic Pivot to Job Interviews via Video Is Here to Stay
Jun 06, 2022
Video interviews by hiring managers have increased 159% year-on-year and for good reason — they are much more efficient.

Talent Talk: Why a Surprising Shift in Employee Demands Shouldn’t Surprise Us
May 23, 2022
Just yesterday, it seems, all the recruitment pundits were saying that workplace culture trumped pay in attracting employees. Rampant inflation and the cost of housing changed that equation.

Seven Up for Induction into Plastics Pioneers Association
May 18, 2022
The seven new members span various plastics processing technologies but they all share a passion for educating young people on career opportunities in the plastics industry.

Talent Talk: The New Normal of Job Changes
May 09, 2022
On average, employees hold between 10 and 13 different jobs over the course of their careers. They are not “job hoppers,” and...

ANTEC 2022 Returns as In-Person Event Co-Located with Plastec South
Apr 27, 2022
More than 65 papers are scheduled for presentation, covering everything from additive manufacturing and advanced manufacturing...

Memo to Molders: There’s Never Been a Better Time to Fire Your Worst Customers
Apr 19, 2022
More than ever, molders are terminating bad relationships and focusing on the people and companies they truly value, said lawyer Alan Rothenbuecher during a panel discussion at Plastec West.
Load More