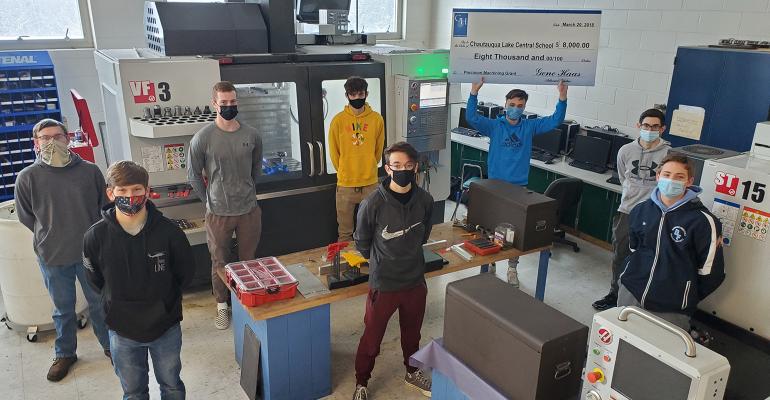 The Chautauqua Lake Central School received an $8,000 machining grant from Haas for its manufacturing program.
Jamestown Plastics CEO Jay Baker helped to steer a STEM-inspired lunch program into a full fledged manufacturing curriculum for students in grades seven through 12. Other school districts are taking notice.

Like many of his peers in the plastics industry, Jamestown Plastics CEO Jay Baker has struggled to find skilled workers. The shortage is only going to worsen, he figured, as more manufacturing is reshored to the United States. The solution is obvious — nurture an interest in manufacturing among young people — but getting the local school district on board seemed insurmountable. Then he had an epiphany. What has been accomplished since then in the Chautauqua Lake Central School in western New York could serve as a model for other communities.

Throughout much of his career, Baker served as president of the local school board. He spent a great deal of time “railing in school board meetings about how the New York state education system was not equipping young men and women with the job skills that the manufacturing base needs,” he told PlasticsToday. Baker is particularly distressed by the absence of shop class that used to be a staple in middle and high school. “It’s a travesty. You learn so much when you’re able to create something with your hands, when that creativity becomes something physical,” said Baker.

To prove the point, he and an old friend, Randy Stewart, who had a long career in tool and die making and metal fabrication, took matters into their own hands and started a lunch program at Chautauqua Lake Central School in 2014. They donated some equipment, and it was an immediate success, said Baker.

In 2017, the manufacturing club became part of the official school curriculum and in 2018 a STEM lab was opened. Machining centers and teaching stations with state-of-the-art Haas controllers were installed. The manufacturing program is now integrated into the curriculum for grades 7 through 12, where students are taught the process of taking a concept and creating a physical product using CAD/CAM and CNC equipment. Moreover, they can earn up to 30 credit hours at Rochester Institute of Technology (RIT), one of the most prestigious research universities in the country.

What started as a makeshift club has become something of a phenomenon at the school, said Baker. The students have become enamored with making things — “There are a lot of beat-up pickup trucks in the school parking lot with really fancy bumpers,” said Baker — and the staff keeps suggesting new projects. “The baseball team had them make bat racks out of aluminum. They’re gorgeous.”

The program has benefited students of all achievement levels, from the senior class valedictorian a couple of years ago in whom it instilled a passion for engineering to young people who may be struggling academically. Remarkably, more than 500 students have participated in the program since it started in a school that typically graduates around 60 students each year. “Those kids are finding something they love to do, like welding or machining, and they are coming out of that experience with a marketable skill if they choose not to go to college,” said Baker.

Of course a number of those kids end up spending some time at Jamestown Plastics. “We’ve got three young people with us right now who went through the manufacturing program. One of them has been with us for two years, and they are all going to college.”

And it’s not just the students that have caught the manufacturing bug — some teachers have gone on to get certificates in welding so that they can pass along that skill to their students.

For Baker, exposing young people to manufacturing is crucial, as reshoring creates new demand and the old guard retires. “We're going to run out of the people who know how to make the stuff that makes stuff. That's what I tell instructors. It’s the number one challenge for every manufacturer that I’ve talked to, big, small, or otherwise,” said Baker.

And the message is being received. The local ABC affiliate covered the program recently, and educators and school district representatives have reached out to Baker.

Meanwhile, the Chautauqua Lake Central School is expanding space for the manufacturing program, which will be finished in time for the start of the school year this fall. “We’re in the building phase right now,” says Baker, “and once we’re done, it will be amazing.”

The 64-year-old company’s core business is custom thermoforming for the medical and other sectors. In addition to the headquarters in Brockton, NY, it operates a facility in Brownsville, TX, with a third plant coming online soon. In 2015, it received a patent for its Click-It closure technology, which led to the development of its Clamtainer product line. The product was recently profiled in PlasticsToday: Claimtainer Reinvents Itself Through the Years.