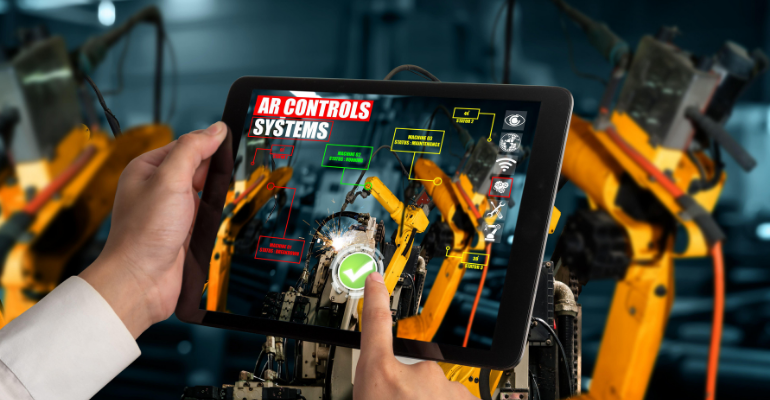 Two manufacturing influencers weigh in on how to revolutionize the way people and companies attract the next generation workforce.

The U.S. manufacturing industry is expected to have as many as 2.4 million vacant manufacturing jobs in the next five years – just in case you weren't already concerned about the manufacturing labor shortage.

“It’s this massive number,” Jake Hall, the Manufacturing Millennial, said Tuesday during a fireside chat at MD&M West (part of IME West) in Anaheim, CA. He was joined by Chris Luecke, host of the wildly popular Manufacturing Happy Hour podcast.

Baby boomers are reaching retirement age and millennials and gen Zs are not exactly chomping at the bit to take over those jobs. That’s largely due to the industry's branding, Luecke says.

Manufacturing has a branding problem

All too often the manufacturing industry is described as dull, dark, dirty, and dangerous.

Luecke describes his first factory job as being the exact opposite of those four D words. It was clean, bright, and the first project he ever worked on centered around how to make manufacturers safe.

Hall also talked about these four D words during a recent webinar, “Okay, Boomer” with Joe Campbell, a baby boomer and senior manager of strategic marketing and applications development at Universal Robots.

When millennials were graduating high school and their guidance counselors asked where they wanted to go after high school, manufacturing was never brought up, Hall said. Millennials were pushed toward a four-year degree instead.

In fact, he said, even though eight out of 10 Americans believe that manufacturing is critical to the U.S. economy, only three out of 10 say they want their kids to work in manufacturing. That massive discrepancy is largely due to the misconceptions that exist about the industry, he said.

But advanced manufacturing technologies are changing the perception of the industry.

Manufacturing and tech are colliding

“There's a lot more overlap in the Venn diagram between manufacturing and tech,” Luecke said. “Ten years ago, everyone was really excited to work at Facebook and Google, a lot of that's still the case today.”

But the reality, he says, is that there are a lot of innovative manufacturing companies – electric vehicle companies, for example – that are adopting the tech world’s “move fast and break things” mentality.

The IME West exhibit floor is full of examples, he pointed out.

“You just look around, there’s a robot moving every direction,” Luecke said. “What we need to do is make sure that story is being told in a way that allows companies to attract new workers, attract the next generation, to their businesses.”

Contrary to common misconceptions about the younger generations, it’s not because they’re lazy, entitled, or lacking in work ethic – they just view their work life differently.

In order for the manufacturing industry to attract the next generation workforce, employers must first understand what sets these two younger generations apart from previous generations. The graphic below illustrates the defining characteristics of each of these next-gen workers, as highlighted by Hall and Luecke during the discussion. 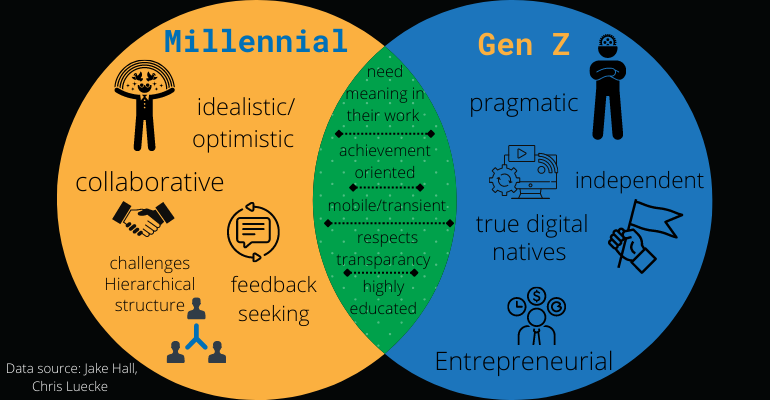 Manufacturing is evolving from a state of repetitively making the same parts to producing components with variability. That requires different skill sets such as the ability to learn and adapt to new systems such as robotics, artificial intelligence software, and other technologies that make up the fourth industrial revolution, or industry 4.0.

“Do they have the ability to look at something, understand, and act on it? This is what we want our future employee to look like. These are the skill sets that we believe they need,” Hall said.

Millennials and gen Zs are driven by work that they can find meaning in. The companies that are approaching things differently and defining the purpose of their work are the ones that are going to be attractive to the younger workforce, he said. Similarly, this is a workforce that is very achievement oriented.

Take SpaceX, for example. Founded by Elon Musk, SpaceX happens to be located just 30 miles from the IME West tradeshow in Hawthorne, CA.

“Theirs is an achievement-oriented goal beyond just what their daily job is – they want to land on Mars,” Hall said. “And everything that they do is to get to that larger goal.”

Having a clear goal and sharing that goal or larger purpose with employees can make companies more attractive to a younger workforce, he said.

Investing in automation and emerging tools of the trade like industrial exoskeletons, wearables, AI, augmented reality, and even grip-assist gloves can also go a long way toward attracting millennials and gen Zs to the manufacturing industry, Hall and Luecke said.