In early 2013, Nike launched its Vapor Laser Talon soccer cleat with a 3D printed plate.  While 3D printing had been used throughout the industry for rapid prototyping for years, the Vapor Laser Talon was the first athletic shoe using a production 3D-printed component.

In early 2013, Nike launched its Vapor Laser Talon soccer cleat with a 3D printed plate.  While 3D printing had been used throughout the industry for rapid prototyping for years, the Vapor Laser Talon was the first athletic shoe using a production 3D-printed component.

Nike wasn't especially forthcoming about the details of the plate, saying only that a proprietary material was printed with Selective Laser Sintering (SLS). The SLS technique uses lasers shot into packed plastic powder (or metal powder) to fuse the particles and create a 3D shape. SLS and other 3D printing processes allow for the engineering and production of shapes not possible using traditional manufacturing techniques. 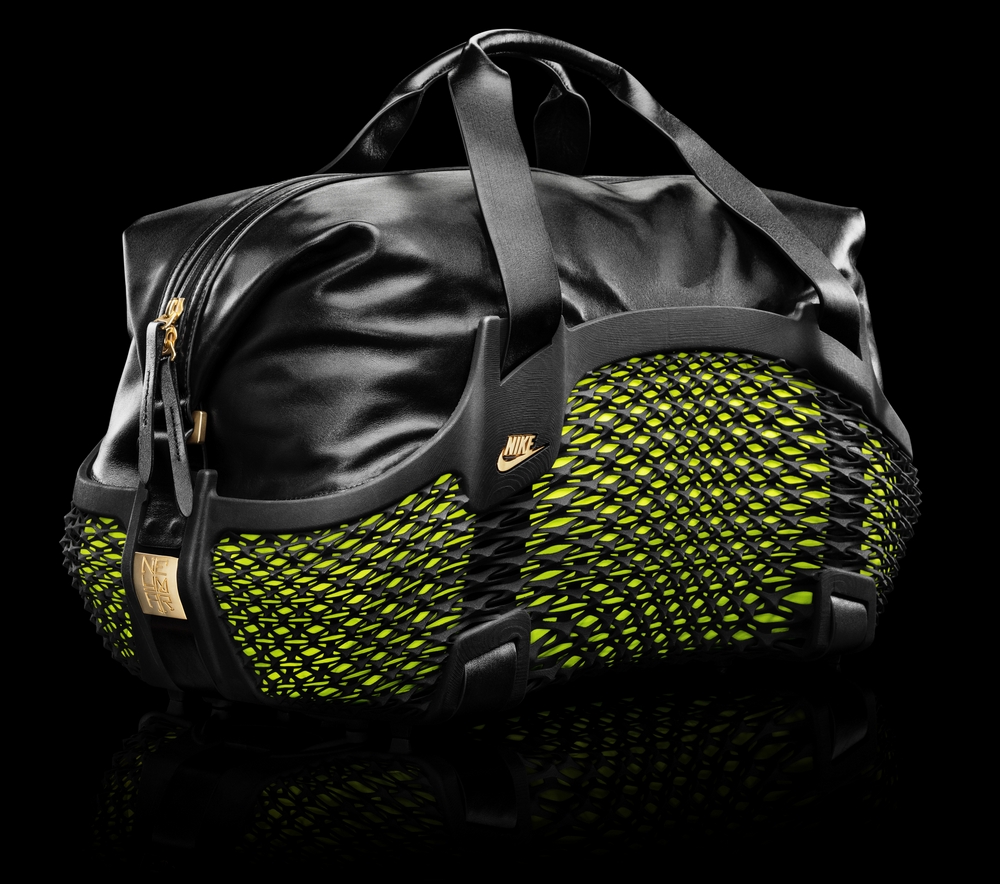 The Vapor Laser Talon, and the internal 40 Yard Dash Project that spawned it, gave Nike insight that's helping it change and improve how it designs and produces its products.

Less than a year after the Vapor Laser Talon came a follow-up shoe, the Vapor Carbon cleat.  Its latest production show using 3D printed parts is the Vapor HyperAgility cleat, launched in early 2014.

To showcase its growing capabilities in the realm of 3D printed parts, Nike recently made three special duffel bags for World Cup players.

Nike used traditional as well as 3D techniques in the construction of the Rebento duffle bag. The traditional methods include hand-worked leather in the upper.

The base of the bag was 3D printed. Laser-sintered nylon creates an intertwined weave for the base. It gives body to the duffle bag and gives it a structure that is lightweight, durable, and allows for flex. The leather upper and straps fit into the 3D printed base without the use of glue or adhesive.

Despite the exclusivity of this product run, Nike's clearly thinking about the future implications of 3D printing.  The company noted that it allows for new levels of customization and offers new potential for "integrated individuality."

Nike is also continuing to use 3D printed parts for prototyping product design iterations, and the technology was instrumental in the development of a new soccer shin guard. The Mercurial FlyLite Guard will have a much broader product rollout than the duffle bag—Nike begins selling it at retail on July 1.

"With 3D printing, we were able to quickly innovate, experiment and test hundreds of patterns and prototypes for the engineered shock system,” said Lotti.

Assessing so many iterations enabled the company to optimize its protective capabilities without hindering player speed, fit, or comfort. The guard uses engineered materials with the new design to provide protection with a barely-there feel. The outer shell and a shock system on the back of the guard work together to provide impact protection with flexibility and breathability. The traditional foam backing is replaced with a new webbed shock system designed to, gram for gram, provide more consistent impact absorption than does foam. Pips in the webbed backing come into contact with the outer shell to help absorb and disperse impact, protecting the shin while with minimal materials.