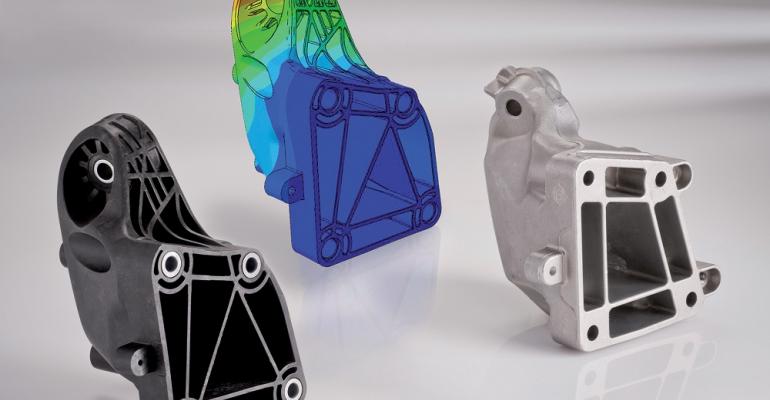 Daimler is installing the world's first plastic engine support for the six-cylinder diesel engine used in the new GL Class. Compared to the previous aluminum support, the plastic part offers improved acoustical properties, better thermal insulating characteristics and a 30% weight advantage, while being able to withstand the same load.

Daimler is installing the world's first plastic engine support for the six-cylinder diesel engine used in the new GL Class. Compared to the previous aluminum support, the plastic part offers improved acoustical properties, better thermal insulating characteristics and a 30% weight advantage, while being able to withstand the same load.

The part, which supports the engine with the aid of the engine mounts, is molded from Ultramid A3WG10 CR, a highly reinforced specialty polyamide (PA) from BASF (Ludwigshafen, Germany) that has been optimized for high mechanical loads. Joma-Polytec (Bodelshausen, Germany) was responsible for designing the injection mold and producing the plastic engine support.

The torque supports that are already used by various automakers in versions of Ultramid transmit only the tilting moment of the engine. In contrast, engine supports are subject to a permanent load—the engine's weight—while absorbing in addition the entire engine torque. To date, they have always been made from aluminum.

To replace aluminum in this challenging and also crash-relevant application, the plastic must fulfill demanding mechanical requirements: while Ultramid A3WG10 CR is very rigid; it was also necessary to demonstrate that it exhibited sufficiently low tendency to creep in the confined space of the engine compartment when subjected to a continuous load. Furthermore, depending on the installation conditions in the engine compartment, the plastic engine support must also withstand high bending moments. The good acoustic characteristics are the primary benefit of the Ultramid engine support over its aluminum counterpart. Thanks to the damping behavior specific to plastic, the new engine support contributes to a more balanced sound.

An additional benefit is that the heat conduction of the plastic is considerably less than that of aluminum. As a consequence, the Ultramid engine support provides better protection from the engine's heat for the natural rubber engine mounts connected to it, increasing their service life.

The multitude of tests that the plastic part must pass successfully includes the so-called repair crash, which replicates smaller crashes, and the massive offset crash (offset head-on crash). In the first case, the support must remain undamaged; in the second case, it must fail quickly and in a specific manner to prevent the engine's entering the passenger compartment.

In addition to checking these requirements in actual crash tests, BASF incorporated both cases into the very early development phase of the complex-shaped engine support through use of its Ultrasim universal simulation tool and predicted the part's behavior: Ultimate (breaking) loads, strength values under dynamic pulsed loads and crash loads agreed very well with the results of testing and achieved the values required for the aluminum predecessor. It was thus possible to incorporate ribbing to withstand the high loads and satisfy acoustic requirements early on and reduce the number of prototypes.