Five years after creating a subsidiary in the country and nearly three decades since it first began operations there, Arburg inaugurated its newest facility in Querétaro, Mexico on June 12. The new purpose-built 620-sq-m (6700-sq-ft) structure represents an investment of approximately Euro 437,500 ($572,250), Arburg told PlasticsToday.

Five years after creating a subsidiary in the country and nearly three decades since it first began operations there, Arburg inaugurated its newest facility in Querétaro, Mexico on June 12. The new purpose-built 620-sq-m (6700-sq-ft) structure represents an investment of approximately Euro 437,500 ($572,250), Arburg told PlasticsToday.

Construction work began in early December 2012, and the company was able to move into the new premises at Navex Inmobiliaria's Juárez industrial park in April 2013. The structure was built to Arburg's corporate design standards by Navex Constructora.

Growth in the Mexican market prompted Arburg to create its own subsidiary with trading partners in the country in 2008, but its history in Mexico goes back the 1980s. Employees at Arburg SA de CV numbered six when the subsidiary began five years ago and currently stand at 14, with plans to be at 16 by year's end. 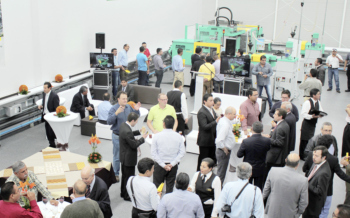 Managing Partner Michael Hehl said in a speech at the grand opening that Arburg's Mexican customers continue to grow, particularly those in the automotive and technical parts segments. Faster and more energy efficient machines are being sought in the country, according to Hehl, with robotics also in demand. According to  Hehl, half of the injection molding machines it delivers to Mexico are equipped with robotics.

The building's showroom cover's 215 sq m with enough room for five of Arburg's Allrounder injection moulding machines. In addition to showcasing the latest Arburg technology, the facility will offer mold trials, training, spare parts, a workshop, offices and a cafeteria. A flexible partition wall allows the training area to be opened up and seat approximately 30 people.

Two cells ran at the event, including what Arburg described as an automation system based on an energy-optimized hydraulic Allrounder 470 C Golden Edition with Multilift Select robotic system, and a hybrid Allrounder 570 H highlisting the use of Arburg's Hidrive series for the packaging sector. These two machines are joined by two others at the site at this time.

Manufacturing production in Querétaro grew by 9.2% in 2012, according to Mexico Now, with nearly 6000 companies devoted to manufacturing, which employ more than 143,000 workers. The city is 100 miles north of Mexico City and lies on the so-called "NAFTA highway", linking the city, and the country, to its largest trading partner, the U.S.