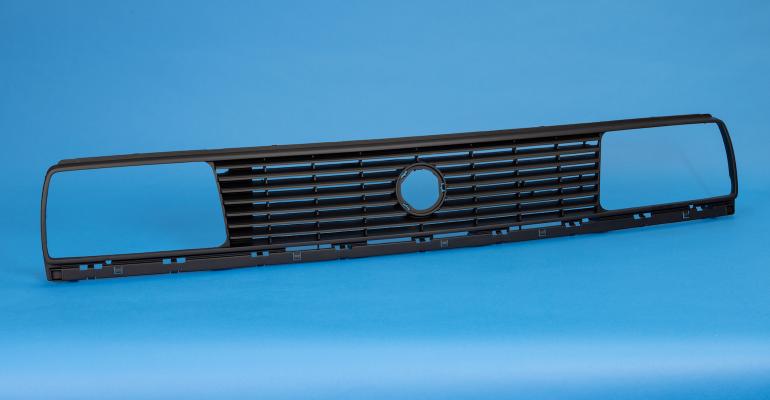 The auto pioneered the molded-in-color weatherable grille, which has become an industry standard.

The world’s first molded-in-color (MIC) weatherable grille, used on the 1987 Volkswagen Golf, has been named the 2022 Hall of Fame winner by the Automotive Division of the Society of Plastics Engineers (SPE). This will be celebrated by honoring the technology and the companies and people originally involved in developing this application during SPE’s 51st annual Automotive Innovation Awards Competition & Gala on Nov. 2, 2022.

The industry’s first MIC weatherable grille was made from precolored Luran S ASA resin from Ineos Styrolution, which enabled the molded part to emerge in a specific color and finish. The process proved to be a game changer for vehicle front grilles by providing a weatherable, paint-free exterior surface.

To be considered for a Hall of Fame Award, an automotive plastic or composite component must have been in continuous service in some form for at least 15 years and been broadly adopted in the automotive industry. This application certainly qualifies, as MIC grilles have become the industry standard used by every major OEM for front grilles, replacing traditionally painted materials on over 300 million exterior parts including grilles, mirrors, pillars, spoilers, fog bezels, and more. Further technology now being developed around MIC ASA includes radar detection covers, lidar equipment, and center high mounted stop lamp (CHMSL) bezels. The automotive market for MIC ASA has grown to more than 100 million pounds (44,400 tonnes) globally.

The benefits of MIC grilles versus painted front grilles include the elimination of the paint process, 25 to 35% cost savings, excellent wearability, high impact strength, and excellent dimensional stability. The environmental benefits include a significant reduction in CO2 and VOCs, energy usage, and green-house gasses. MIC grilles have had a huge impact on automotive design by enabling increased design flexibility including grained low-gloss and smooth high-gloss appearances and hot foil stamping.

The companies involved in developing the first MIC weatherable grille application include: OEM – Volkswagen Group; Molder/Processor – Volkswagen Group; and Material Supplier – Ineos Styrolution. Representatives from these companies will accept the SPE Automotive Hall of Fame Award, on behalf of the original team that developed the first MIC weatherable grille on the 1987 Volkswagen Golf, at the SPE Automotive Innovation Awards Gala on Nov. 2, 2022, at Burton Manor in Livonia, MI.