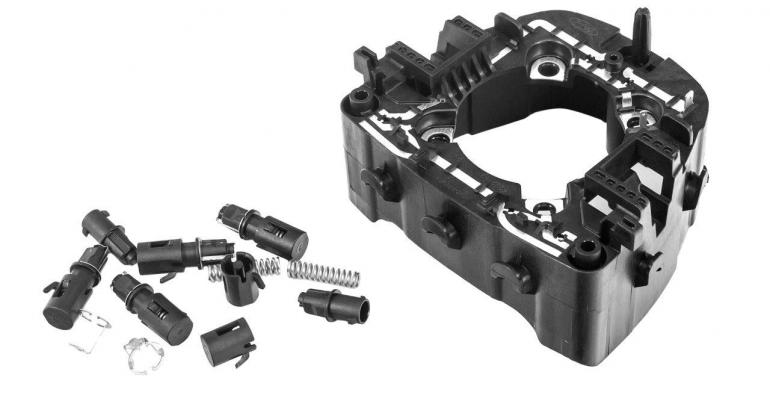 A hybrid plastic/metal airbag housing with integrated lead frame, co-developed and produced by Quadrant Creative Molding & Systems (QCMS; Tielt, Belgium) for an automotive steering wheel airbag assembly, is proving an important saver of weight, packing space and costs. Production is carried out fully automatically to provide high levels of quality and safety in the zero-defect environment of automotive passive safety. The assembly is being fitted on vehicles produced around the world.

The integrated lead frame activates the horn when the driver presses the airbag cover in the centre of the steering wheel, completing an electric circuit. As such, the module is a safety-critical component, so design and manufacturing requirements are very demanding. It is produced by injection molding a 40% glass-fiber-reinforced polyamide (PA) over a pre-coated stamped steel plate.

The airbag housing contains the airbag itself as well as the gas generator, with its main function being to direct the airbag during deployment, by maintaining the form and integrity of the housing. The design of the housing, as well as the polymer processing technology used to make it, is of prime importance to this. The hybrid structure is created by combining the plastic housing with the metal leadframe. During development, the metal part within the plastic part was shown to induce additional stresses during the deployment; these were eliminated using FEM analysis and design changes.

The overmolding process is carried out fully automatically in a purpose-built manufacturing cell at the main QCMS plant in Tielt, Belgium. A six-axis robot positions the leadframe precisely into the mold. The reinforced PA is then injected around it. After molding, the finished product is removed from the mold and placed in a neighbouring station that carries out a 100% quality check. Once the part’s quality is assured, it is positioned on a conveyer belt that takes it to downstream assembly operations.

The plastic/metal hybrid molding has replaced an assembly of cables on a full steel housing that was more complicated and costly to produce, heavier, and that took up more packing space. It was first designed for the Ford Transit van, which is assembled in Turkey. Production began in 2012. The success of the design has led to Ford introducing it on four other vehicle models. QCMS ships parts from Tielt to locations in Europe, USA, Brazil and India for integration into complete airbag assemblies.

The hybrid integrated lead frame fits in with the continuing trend in the automobile industry to reduce not only weight for savings in fuel, but also space—to allow room for the growing range of increasingly sophisticated safety- and entertainment-related devices now fitted to vehicles, especially in and around the steering wheel—and, of course, costs.