Plastics, Composites Venture into Orbit and Beyond 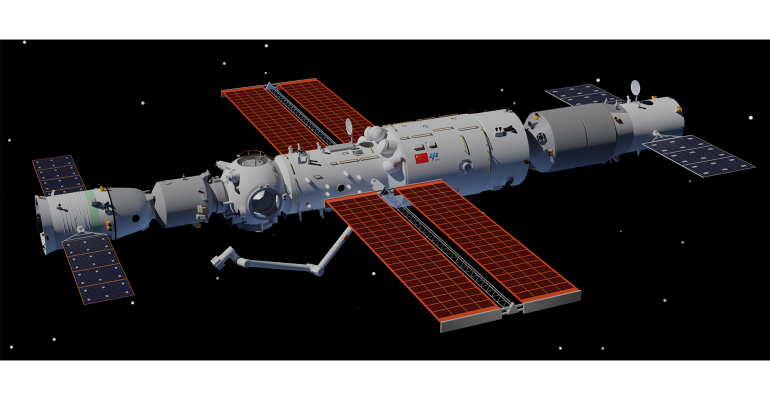 This rendering of Tiangong Space Station by Shujianyang shows the Tianhe core module in the middle, the Shenzhou-12 crewed spacecraft on the left, and Tianzhou-2 cargo spacecraft on the right.
Next year’s Chinaplas will showcase engineering plastics that are supporting aerospace on earth, as well as space exploration and research, at an unprecedented level.

China’s Tiangong Space Station soon will receive its second batch of astronauts. Shenzhou 13 is scheduled to be launched on Oct. 16, bringing three astronauts to the space station on a six-month mission.

The aerospace industry, which spans a host of applications from aviation to industrial and military, has taken innovation in plastic materials into a broader space. While metals remain mainstays in the aerospace industry, since the 1970s plastics have enabled key breakthroughs, notably by reducing aircraft weight by as much as 50%.

Beyond lightweighting, plastics have been meeting the aerospace industry’s requirements for strength and durability; resistance to corrosion and fatigue; impact-resistance; thermal stability; and ease of assembly. Materials such as polyetheretherketone (PEEK), polyimide (PI), polyamide-imide (PAI), polychlorotrifluoroethylene (PCTFE), among others, are now being tapped for their inherent properties.

The shift from heavy metals to lightweight plastic materials brought to the fore the use of carbon fiber–reinforced plastic. Carbon-fiber composites have been used to produce large, complex parts for the aerospace industry. From narrow-body aircraft such as the Airbus 320 to the top-selling Airbus A350 and Boeing 787, material innovations have created major technological leaps in the aviation industry.

The wide-body Airbus A350 XWB is made up of more than 50% composites, helping to achieve a 25% reduction in fuel cost. The A350 XWB’s wing, which measures 32 x 6 meters, is the biggest single aviation part produced from carbon fiber–reinforced plastic.

The Boeing 787 is made of 50% composites by weight and 80% by volume; composites enabled a total 20% weight reduction. Carbon fiber has led to tougher body frames at reduced weight, letting the aircraft carry higher numbers of passengers at lower fuel costs.

High-performance plastics are extensively used in the space program, from helmets made of polycarbonate and the protective equipment and space suits worn by astronauts to the interior parts and structures of the spacecraft.

China aims to transform itself into an aviation powerhouse, drawing on its more than 70 years of technological experience in this area. The country’s decision to implement a manned space program in 1992 has reaped tremendous developments. The launch of the Shenzhou-12 crewed spaceship in June 2021 to China’s earth-orbiting space station Tianhe was a major step toward the construction of China’s permanent space station. The three-person crew in the return capsule of Shenzhou-12 marked another milestone in China’s space program, noted the release from Chinaplas organizers.

A special exhibit at next year’s Chinaplas will highlight the use of plastics in the aviation and aerospace industries. Chinaplas 2022 is scheduled for April 25 to 28 in Shanghai. More information is on the Chinaplas website.