Two years ago, nova-Institute (Hürth, Germany) published the results of the most comprehensive market study performed to date in the bioplastics field. According to estimates of the surveyed manufacturers at that time, production capacity was expected to rise to nearly 12 million metric tons by 2020.

Two years ago, nova-Institute (Hürth, Germany) published the results of the most comprehensive market study performed to date in the bioplastics field. According to estimates of the surveyed manufacturers at that time, production capacity was expected to rise to nearly 12 million metric tons by 2020. Fast forward to 2015 and that picture has changed: In the update to this study that was recently published by nova-Institute, production capacity is projected to triple from 5.1 million metric tons in 2013, or 2% share of total polymer production, to some 17 million metric tons, or 4% share of total polymer production, in 2020.

According to the updated 500-page market study, production capacity for biobased polymers will show very impressive development and annual growth rates, with a compound annual growth rate (CAGR) of almost 20%, far exceeding the projected 3 to 4% CAGR of petrochemical polymers.

The updated study, "Bio-based Building Blocks and Polymers in the World - Capacities, Production and Applications: Status Quo and Trends Towards 2020," was published on May 14, 2015. Its authors are experts from the German nova-Institute in collaboration with 10 renowned international experts in the field of biobased building blocks and polymers. They not only examined the full range of biobased polymers available; they also, for the first time, analyzed several major building blocks produced around the world.

Among other results, the study found that biobased drop-ins, led by bio-PET and the new polymers PLA and PHA, will show the fastest rates of market growth. The lion's share of capital investment is expected to take place in Asia.

Drop-in biobased polymers are chemically identical to their petrochemical counterparts, but are at least partially derived from biomass. One of the most important members of this group is partly biobased polyethylene terephthalate (PET). Biobased PET production capacity was around 600,000 metric tons in 2013 and is projected to reach about 7 million metric tons by 2020, using bio-ethanol from sugar cane. Biobased PET production is expanding at high rates worldwide, largely due to the Plant PET Technology Collaborative (PTC) initiative launched by the Coca-Cola Co.

The second most dynamic development is foreseen for the family of biopolymers known as polyhydroxyalkanoates (PHAs). Unlike biobased PET, these are new polymers, but nonetheless exhibit growth rates similar to those of biobased PET. Polylactic acid (PLA) and biobased polyurethanes (PUR) are showing impressive growth, as well: Production capacities of these biopolymers are expected almost to quadruple between 2013 and 2020.

Most investment in new biobased polymer production capacity will take place in Asia, mainly because of better access to feedstock and a favorable political framework. The share of biopolymer production capacity in Europe is projected to decrease from 17% to 8%; in North America, this is set to fall from 18% to 4%; while in Asia it is set to increase from 51% to 76%. South America is likely to remain constant with a share of around 12%.

In other words, world market shares are expected to shift dramatically. Asia is predicted to experience most of the developments in the field of biobased building block and polymer production, while Europe and North America are forecast to lose more than a half and just over three quarters of their market shares, respectively. 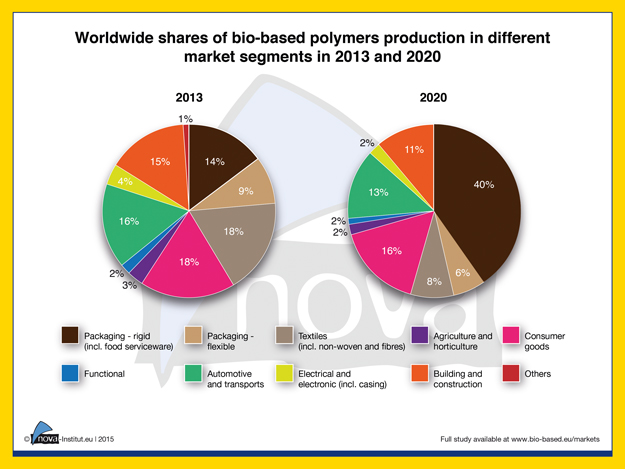 The trend reports section contains a total of 11 independent articles by leading experts in the field of biobased polymers. The reports cover in detail every recent issue in the worldwide biobased polymer market.

The final section includes 96 company profiles with specific data including locations, biobased polymers, feedstocks and production capacities (actual data for 2011 and 2013 and forecasts for 2020). The profiles also encompass basic information on the companies (joint ventures, partnerships, technology and biobased products). A company index by polymers, with list of acronyms, follows.

The full report can be ordered for €3,000 plus VAT; a short version of the report can be downloaded for free at www.biobased.eu/markets.