Recent
Bioplastics News Stream
May 21, 2022
Ineos, Barnes Partner to Optimize Molding of Recycled ABS
May 20, 2022
Materials Supplier Tosaf Completes $2 Million Upgrade
May 20, 2022
TotalEnergies, Vanheede Environment Partner to Upscale Manufacture of Circular Polymers
May 20, 2022
BASF Doubles Antioxidant Capacity in Singapore
May 20, 2022
Bio-Polyolefin Market Set to Grow as Fast as Sugar Cane
May 19, 2022
This Patch Monitors All Your Vitals, Including Blood Pressure
May 19, 2022
Scientists Detect Microplastics in Human Blood
May 19, 2022

European Bioplastics (Berlin, Germany), the European trade organization for the bioplastics industry, is predicting a robust growth of over 350% of the global bioplastics production capacity in the mid-term, said Chairman François de Bie in the annual market data update presented at the 10th European Bioplastics Conference in Berlin. According to the latest findings, this capacity is set to increase from around 1.7 million metric tons in 2014 to approximately 7.8 million metric tons in 2019, with as main drivers biobased, non-biodegradable plastics, such as biobased PE and biobased PET.

According to the presented data, which was compiled in cooperation with the research institutes IfBB at the University of Applied Sciences and Arts (Hannover, Germany) and nova-Institute (Hu?rth, Germany), more than 60 percent of the bioplastics production capacity worldwide in 2014 was biobased, durable plastics. This share will increase to over 80% in 2019. 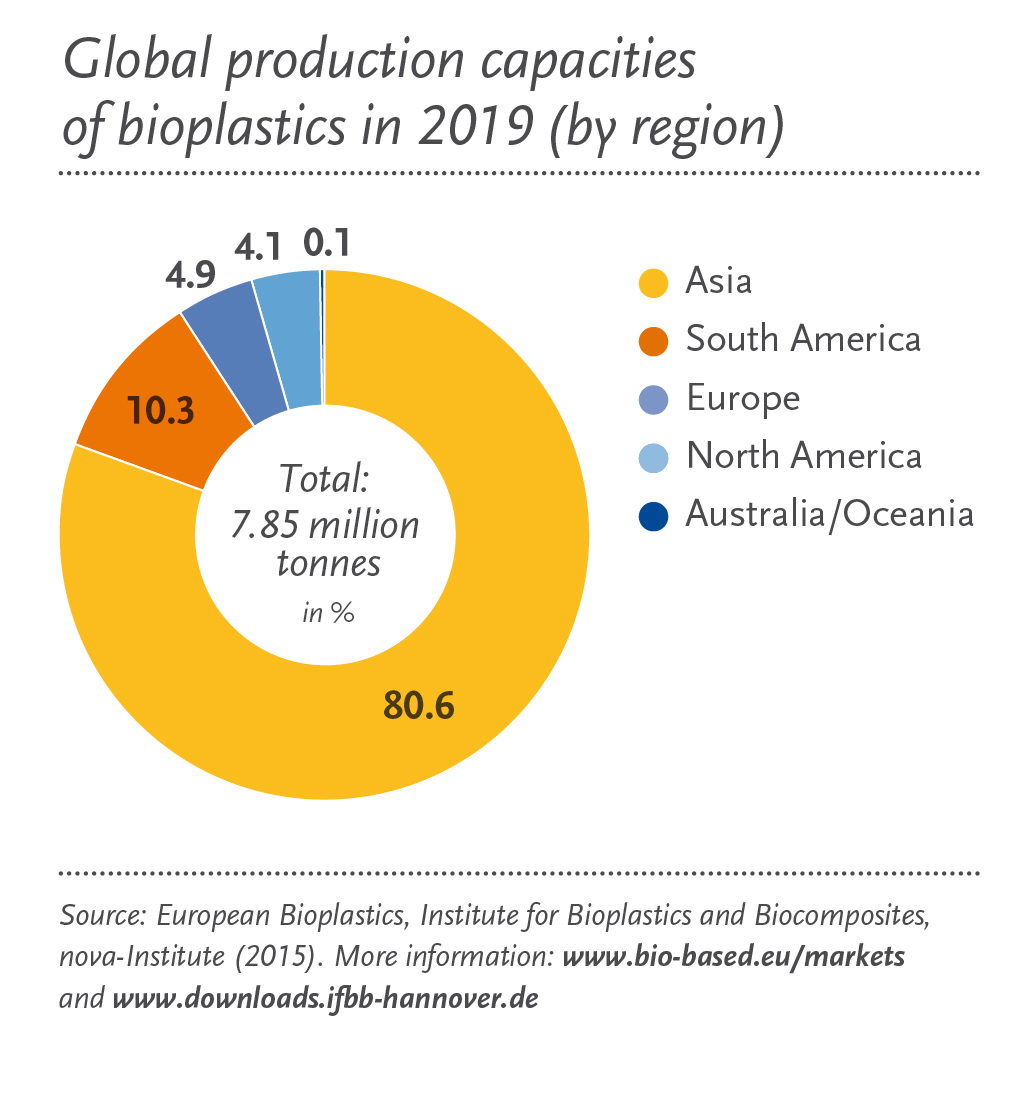 According to Bie, production capacities of biodegradable plastics, such as PLA, PHA, and starch blends, are also growing steadily, nearly doubling from 0.7 million metric tons in 2014 to well over 1.2 million metric tons in 2019. PHA production will double by 2019 compared to 2014, due to a ramp-up of old and new capacities in Asia and the USA. “It seems that compostable plastics are moving from niche to mainstream and many compostable plastics have found their true added value applications,” commented de Bie.

More worrisome is the development—or rather lack thereof—in Europe, said the organization. While in 2019, more than 80% of bioplastics will be produced in Asia, less than 5% of the global production take place in Europe. Countries such as the USA, Asia, and Latin America are implementing close-to-market measures to attract production hubs and promote faster market development; in Europe, the dearth of economic and policy measures promoting a larger scale-up of production capacities within Europe is hindering the healthy development of the bioplastics market.

Packaging remains the single largest field of application for bioplastics with almost 70% (1.2 million metric tons) of the total bioplastics market. Due to the excellent fit of bioplastics in the packaging market, this number is expected to increase to more than 80% (6.5 million metric tons) in 2019. “The data illustrates an important trend to make packaging more resource efficient, which is driven by a growing consumer demand for products with a reduced environmental impact,” de Bie declared.

European Bioplastics is calling for the implementation of a European policy framework that would create a more level playing field, for example by securing equal access to biobased resources and establishing measures making it easier to introduce biobased products on the market.

“We urge EU legislators to consider and make efficient use of the immense environmental, economic growth and job creation potential of our industry in the forthcoming Circular Economy Package,” Bie concluded.