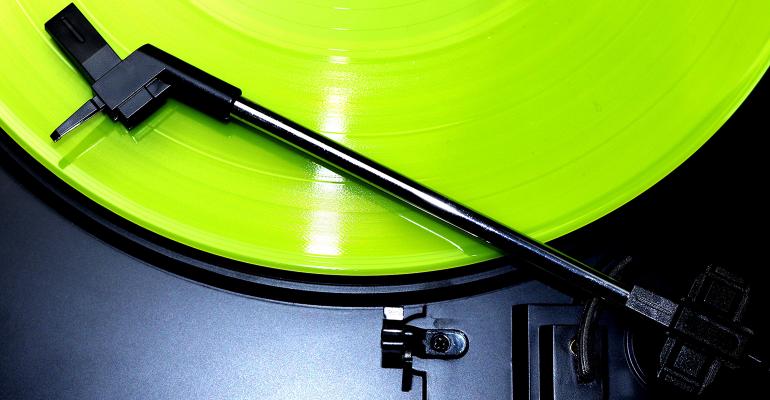 Is this a solution looking for a problem?

Back when rock was fab and one simply bought records, not chic “vinyl,” albums pressed in various colors were briefly popular. The fad didn’t last, although it would reappear periodically — umm, the Pretty in Pink soundtrack, anyone? Inevitably, we all went back to basic black, mostly because the sound quality of the color records was inferior. Now, a UK company called Evolution Music has introduced a green LP, but this time the color is more than a novelty — in fact, it’s pregnant with meaning. As you can see in the embedded tweet, this is the world’s first bioplastic vinyl record.

Given the timing, you might think — as I did — that this is an Earth Day marketing gimmick. Not entirely. The record was released in connection with Music Declares Emergency’s Turn Up the Volume Week, which happens to be April 18 to 24. Earth Day, of course, is April 22, so there is overlap. The mission of this awkwardly named week is to invite the global music community to “remove fossil fuels, protect biodiversity, and implement social justice.” It also wants you to share the message, “No Music on a Dead Planet.” You can find out more about this movement at musicdeclares.net.

The bioplastic vinyl record from Evolution Music does check the “remove fossil fuels” box. Not sure about biodiversity or social justice, but maybe the music and lyrics have something to say about that. I have to ask, though: Is this a solution looking for a problem?

To the best of my knowledge, vinyl records haven’t been found floating in the Great Pacific Garbage Patch or sitting in landfills. They are not contributing to the plastic waste crisis. So why shift to bioplastic vinyl?

On its website, Evolution Records recognizes that “PVC is very stable and not toxic” in the form of a vinyl record, but adds that it “has an impact on human and ecological health” when it is manufactured before it gets to the pressing plant. Evolution Music says that its bioplastic LPs can be pressed using the same manufacturing process. “Only the raw materials will be changed,” writes the company, adding that it is conducting trials with different pressing plants “to ensure the solution works for different types of pressing machinery in use.”

If the process is unchanged, then the harm to human and ecological health can only come from the PVC itself. That’s kind of alarming, when you consider that PVC is the most widely used polymer in medical devices. It has a 50-year track record in healthcare applications.

I suppose that the harm that Evolution Records refers to is the use of fossil fuel to make the vinyl and the chemical process itself. Fair enough. But let’s be real: The share of PVC that is going into the production of vinyl records is negligible in the grand scheme of things. Yes, there has been a renaissance in the consumption of vinyl records, but the quantities produced are a fraction of what they were before CDs and now streaming became the norm.

And it remains to be heard if the sound quality of the bioplastic vinyl record matches the legacy product. No amount of virtue signaling will trump that test for the audiophiles among us shelling out $30 for an album.