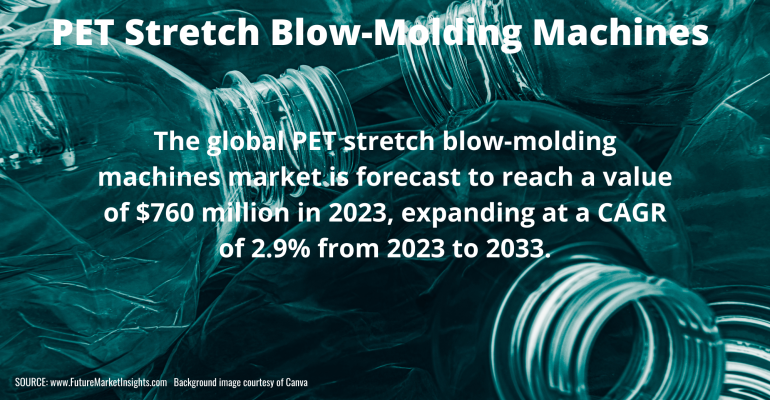 By the start of 2023, the Top 5 5 PET stretch blow-molding machine providers are projected to capture nearly 15-20% of the market, according to a Future Market Insights study published in January 2023.

Substantially increased production outputs in manufacturing industries are the result of increased use of automation for producing numerous products. High-output PET stretch blow-molding machines are used for packaging in various end-use markets.

Market segmented by one- and two-step models.

These machines are available in various types and models in two major categories, single-step and two-step models.

In single-step systems, a preform is molded and is conditioned at the proper temperature. It’s then blown into containers by inserting the mold in a single stretch, which forms a continuous process.

In two-step blow molding machines, on the other hand, a preform is blowmolded and then stored for a required period, usually from 1 to 4 days, and then blown into containers by using reheat blow machines.

According to FMI, the PET stretch blow-molding machines industry revenue boomed to $735.2 million in 2022. Considering the increased application of PET bottles in packaging forecast in an study to be released in March, the market is projected to witness robust growth throughout the estimated time frame.

The PET stretch blow-molding machines industry is anticipated to create an incremental growth opportunity of $243.2 million during the forecast period.

The personal care & cosmetics industry is helping fuel demand, which is predicted to expand by 1.3X through the assessment period.

The most recent activity in the market noted by the analyst was in November 2022 when Krones AG announced the acquisition of systems integrator R+D Custom Automation. Krones aims to expand its capabilities in pharmaceuticals with the acquisition.