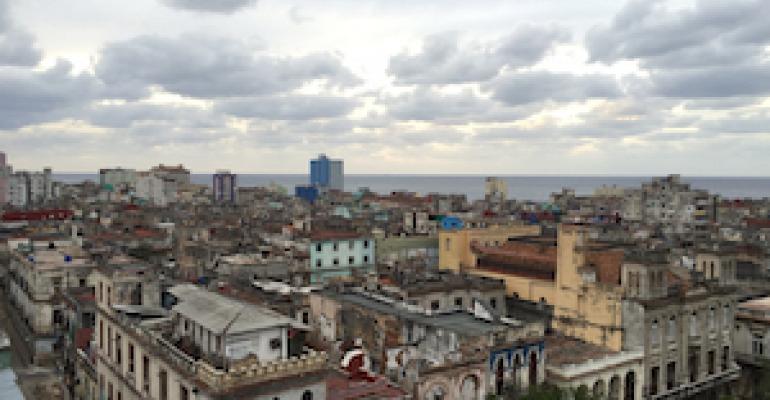 If the United States doesn’t move "sooner rather than later on the Cuban embargo, investment opportunities are going to pass us by," Charles Sholtis, CEO of Plastic Molding Technology (PMT; El Paso, TX) told PlasticsToday following a recent visit to the island. He was part of a four-member delegation that went to Cuba to investigate the country’s market potential for plastics manufacturing. SPI: The plastics industry trade association (Washington, DC) led the delegation, which also included SPI President and CEO Bill Carteaux, SPI Vice President for International Affairs and Trade Michael Taylor and Plastic Pipe Institute CEO Tony Radoszewski.

The trip coincided with President Obama’s historic visit, even though the SPI mission was scheduled well before, and that created some logistical complications, noted Sholtis. Nevertheless, they were able to visit two state-run manufacturing operations: A facility that makes polypropylene bags and textiles and a plant that injection molds food packaging and disposable dinnerware. In both instances, conditions were primitive, said Sholtis.

“The equipment was ancient,” said Sholtis. The injection molding plant located in the Villa Clara province, practically in the jungle, was especially antiquated, he noted. “They were using some ancient Chinese equipment, 50% of it mothballed for parts. One molding machine was practically unidentifiable in terms of the manufacturer. We eventually figured out that it came from a Spanish company none of us had ever heard of,” said Sholtis. There may be better equipped facilities in Cuba, he added, but “many of those factories belong to the military, and they were a bit secretive about them. And they’re not necessarily making weapons; one that we know of is a blowmolding plant,” said Sholtis. And that, one might assume, is a sound business, given that you can’t drink tap water. “They did say that we might be able to visit that factory the next time we visit Cuba, a carrot of sorts.”

The embargo has hit Cuba hard, said Sholtis, and not just in the manufacturing infrastructure, but across the board. And yet, its effectiveness is open to question. “Without politicizing any of this, it won’t lead to regime change. The people we met are proud of their country, rightly or wrongly.” Nevertheless, “U.S. industry should proceed with caution,” said Sholtis. “We don’t really know what we can and cannot do.”

Sholtis does confess to cautious optimism about business prospects on the Communist island. Sholtis points to some encouraging signs, such as the first U.S. factory that is being built in Cuba since the 1960 embargo, which is making tractors for small farms, and the “Special Economic Zone” in the port of Mariel, about 25 miles west of Havana. “These are privately held businesses with tax abatements, so there is some privatization happening,” said Sholtis. The embargo may still be in place, but the deal with Cleber LLC (Raleigh, NC) to open a tractor factory tells you that the United States is letting some investments go forward, he added.

While in Cuba, the delegation met with Adriana Barcelo Permuy, General Director for Industrial Management at Cuba’s Ministry of Industry, who told them that Cuba expects an 83% increase in tourism over the next five years. This will dramatically increase demand for disposable products, as more hotels are built and restaurants open up. Other business opportunities include infrastructure repair and modernization of the manufacturing base. “That, and raw materials. Cuba’s pipeline is stretched—it is importing polypropylene from China! That is so much more expensive than it would be to import it from the United States,” said Sholtis.

While the opportunity exists to enter the newly opened Cuban market, it’s up to Congress to take the final steps to truly normalize business relations, noted PMT in a news release reporting on the delegation’s visit to Cuba. In the meantime, SPI is planning a second trip in June for a formal trade mission with additional U.S. plastics industry leaders, which is timed to coincide with an industrial expo in Havana. 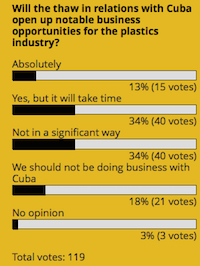 On a related note, this week’s poll on the PlasticsToday site asked readers if they thought the thaw in relations with Cuba would open up notable business opportunities for the plastics industry. Voters were evenly split on the prospects, with 34% (40 votes) saying “yes, but that it will take time” and an equal number opining that the possibilities would not be significant. Only 13% (15 votes) thought it would “absolutely” open up business opportunities. For 18% (21 votes), the point was moot, as they believed we should not be doing business in Cuba at all. A total of 119 votes were cast (three voters had no opinion).

We’ve put up a new poll this week, asking the PlasticsToday community how companies should respond to activist organizations pushing them to change their business practices. Take a moment to give us your opinion by voting in the poll in the right-hand column.