CES a plastics paradise for innovation

If you want to see what plastic makes possible, head over to the Consumer Electronics Show (CES) that runs through Jan. 9 in Las Vegas, NV. I attended CES in the 1980s, because the moldmaking/molding company for which I worked was involved with customers who made consumer electronics products, including Hewlett-Packard, Compaq and others.

If you want to see what plastic makes possible, head over to the Consumer Electronics Show (CES) that runs through Jan. 9 in Las Vegas, NV. I attended CES in the 1980s, because the moldmaking/molding company for which I worked was involved with customers who made consumer electronics products, including Hewlett-Packard, Compaq and others.

If you ever had any doubts about plastic materials contributing to the design and development of consumer electronics products, one trip through the aisles at CES will make you a believer. It takes a few days to tour the various show venues, and you'll spend a lot of time just gawking in amazement at the various technologies on display and the role that plastics play. 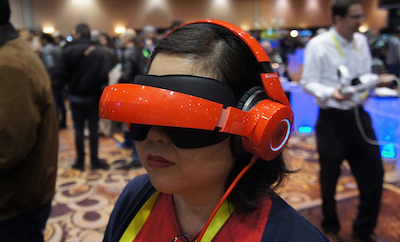 One of the most fascinating products I found while perusing the CES exhibitor list is the Royole-X from Fremont, CA–based startup Royole. This foldable, smart mobile theater is the "world's thinnest, full-color, flexible, touch-enabled computer display," according to the company. The bendable, rollable film has a thickness of 0.01 mm, or less than one-fifth the diameter of a human hair. The Royole-X lets consumers watch and listen to a movie while they're traveling via an audio and video headset. The display has a resolution of 3,300 pixels, 10 times better than a smart phone, said Royole.

A slew of wearable devices are making their debut at CES, as these new high-tech gadgets begin catching on in a big way. There is also an "Unmanned Systems Marketplace," where attendees can see all types of drones. One of the newest drones is the HEXO+, which allows users to capture stunning aerial footage with the use of a simple smartphone app. You can even take aerial footage of yourself hands free as you bike down a mountain trail or ski down the slopes.

And what would a show that features innovations using plastics be without a resin producer on hand. At CES, Sabic (Pittsfield, MA) announced its large-format touch sensor capability with 2.5 and 3D formability. With large-format, interactive displays becoming more ubiquitous—from large indoor and outdoor displays to electronic whiteboards—there is increased demand for advanced materials that are highly sensitive, quick to respond to touch and capable of achieving a variety of complex forms and shapes, said Sabic.

The company took the opportunity at CES to introduce a transparent, conductive polycarbonate (PC) film that represents a completely new class of display materials with transmittance and resistance properties. The film combines Sante nanoparticles technology from Cima NanoTech over a substrate of Sabic's well-known Lexan film to achieve highly sensitive touch screens that are also impact resistant and thermoformable.

While there are alternative materials on the market, Sabic's Director, Technology & Innovation for Display & Electronics, Alan Tsai, noted that its "transparent, conductive polycarbonate solution is more sensitive, which can bring the response times of small-size touchscreens to large-format touchscreens." Additionally when compared to ITO-based laminates over a glass substrate, Tsai noted that the transparent, conductive PC film provides considerable weight savings, which can support thin-wall designs as well as potentially reduce transportation costs.

If you've never been to a CES, you need to explore that event. Not only will you discover lots of very cool technology products, but you just might find a new customer or two. And you'll certainly have an exciting time trying out all the latest gadgets!