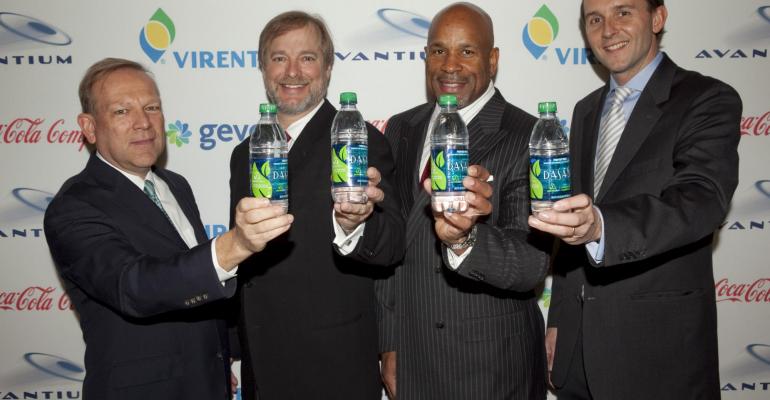 Coca-Cola is betting on the technologies of three firms to help it get to a 100% biobased bottle by 2020, announcing partnerships with Virent, Gevo and Avantium to take its PlantBottle from 30% renewably sourced to 100% in the next eight years.

Virent and Gevo's technologies center on a biobased route to terephthalic acid (PTA) forerunner, paraxylene, which along with monoethylene glycol (MEG), is used to make bottle material polyethylene terephthalate (PET), while Avantium has create a way to convert carbohydrates into furanic chemical building blocks that could be used to create a biobased route to polyesters, among other materials.

For its part, Avantium believes its PEF material will become the next-generation biobased polyester, since it's essentially a drop-in replacement for PET. Avantium started up a PEF pilot plant on Dec. 8 in Geleen, the Netherlands and says it has already made bottles with exceptional barrier and thermal properties, in a production process that fits into the existing bottle supply chain. It plans commercial PEF production in about three to four years. Virent, meanwhile, is targeting early 2015 for the opening of its first full-scale commercial plant.

Gevo has developed a platform technology based on a proprietary fermentation method that utilizes a biocatalyst and the efficient separation of isobutanol. The company says that combination enables the low cost retrofit of existing ethanol capacity for isobutanol, a forerunner to several chemicals, including paraxylene.

Since introduced it was introduced in 2009, more than 10 billion PlantBottle packages have been distributed in 20 countries worldwide. At this stage, the bottle is 30% biobased, with the MEG portion derived sugar cane ethanol, and the other 70% from petroleum based PTA.