Do we still need to include the "formerly Bayer MaterialScience" qualifier whenever we write about Covestro (Leverkusen, Germany)? I think not. Less than one year since the company was renamed, an effective saturation marketing campaign has made Covestro a recognizable brand.

Do we still need to include the "formerly Bayer MaterialScience" qualifier whenever we write about Covestro (Leverkusen, Germany)? I think not. Less than one year since the company was renamed, an effective saturation marketing campaign has made Covestro a recognizable brand. Continuing the messaging, the company was out in full force this week at MD&M West, co-located with PLASTEC West, in Anaheim, CA, where it announced the introduction of a three-way medical stopcock made with Covestro's Makrolon material along with a prepolymer that provides advanced properties for wound-care applications.

Elcam Medical (Hackensack, NJ) has a long-standing collaborative partnership with Covestro, and the medical equipment supplier turned to the company once again when it developed a three-way stopcock that enhances patient safety. The Marvelous (MRVLS) stopcock has a Luer-activated valve that acts as a barrier against bacteria and an inner channel that ensures self-flushing and minimal residual volume. To meet these requirements, Elcam Medical chose Covestro's Makrolon Rx1805, a transparent, biocompatible, chemically resistant material suited for medical technology applications that require contact with body fluids. 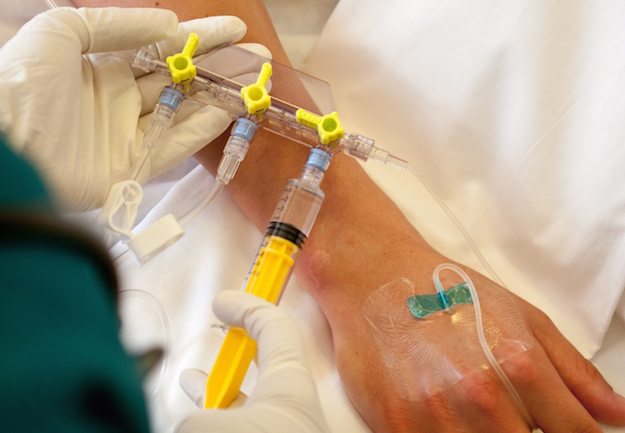 "The device is designed with a self-sealing valve to minimize back flow and, thus, avoid contamination of the fluid and improve patient safety," explained Covestro's Bruce Fine, Market Segment Leader, Medical and Consumer Products. Conventional open infusion ports that are hard to flush and clean present a risk of infection. By contrast, the minimal residual volume and continuous flushing of the interior volume of the stopcock through an inner circumferential channel forces the flow to flush the self-sealing valve and helps prevent bacterial colonization, notes Covestro in a press release. Complete rinsing of the system also contributes to patient safety by reducing the chance of drug interactions, unintentional administration of residual drugs and the risk of air emboli.

"We have increased the dry strength of one of our foams that has been on the market and, most importantly, enhanced its moisture-management properties and breathability for wound-care applications," said Mah. Baymedix FP505 absorbs up to 19 times its weight and will retain more than 60% of the fluid, even when an object "with the weight of a bowling ball" is placed on top of it, added Mah.

Unlike aromatic foams, which may turn yellow and become brittle, aliphatic foams made from Baymedix FP505 retain their pristine appearance, which is desirable in a healthcare setting, said Mah.

Tangible and chemical samples of Baymedix FP505 are now available from Covestro.