Green Matter: Bioplastics get a share of the limelight at K 2013

At this year's international K fair, sustainability and energy efficiency were the overarching themes that impacted almost every segment of the plastics industry on exhibit in Dusseldorf. Innovations in greener machinery, auxiliaries, processes, technologies and, of course, materials were on display at booths in all the halls, with more attention than ever for bioplastics. A few of the highlights are reviewed below.

At this year's international K fair, sustainability and energy efficiency were the overarching themes that impacted almost every segment of the plastics industry on exhibit in Dusseldorf. Innovations in greener machinery, auxiliaries, processes, technologies and, of course, materials were on display at booths in all the halls, with more attention than ever for bioplastics. A few of the highlights are reviewed below.

The show opened with an announcement from Switzerland-based Wifag-Polytype and Avantium, in the Netherlands, that they were to collaborate on thermoformed products made from Avantium's 100% biobased PEF (polyethylene furanoate). Wifag-Polytype is among the leading manufacturers of thermoforming and printing equipment, and the sole company producing the entire range from sheet extrusion, to thermoforming, to coating and printing of thermoformed products. According to Avantium, thermoforming is an excellent application for PEF plastics, as it offers better barrier, thermal and mechanical properties than PET. PEF could extend the shelf life of perishable goods like meats or cheeses, while its higher thermal stability could enable packaging opportunities for microwaveable products.

Novamont launched the third and fourth generation of products in its Mater-Bi portfolio of biodegradable and compostable bioplastics. Next to its existing starch-based processes and technology used to produce polyesters from 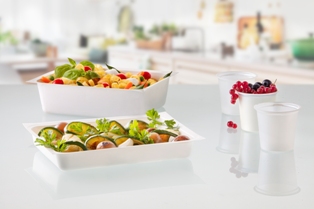 The new materials, which are said to contain a higher percentage of renewable raw materials, are suitable for a wide range of applications, says the company, including flexible and rigid films, coatings, printing, extrusion and thermoforming. Novamont sales manager Alberto Castellanza, speaking at the Bioplastics Business Breakfast conference at the K show also announced that the company was bringing its bio-based butanediol (BDO) plant, established as a joint venture with US-based Genomatica, on stream next year. The plant will have a production capacity of approximately 40 million pounds per year and will use biomass sugars as the renewable feedstock.

Meredian, Inc., a privately held biopolymer manufacturer of biodegradable polyhydroxyalkanoates (PHAs), at K 2013 formally announced that commercial production of its products would commence in mid-2014. To date, the company has produced only developmental quantities of PHA from its pilot facility. According to Paul Pereira, Executive Chairman of the Board, Meredian's next steps will include preparing the Bainbridge plant for full production for clients, "as well as continuing to educate consumers regarding this innovative 'disruptive' technology."

Braskem announced the launch of a new line of green low density polyethylene (LDPE), completing its line-up of PE made from renewable sources, which already offers the high density (HDPE) and linear (LLDPE) variants. This resin will be made available to the market in 2014, with an annual production of approximately 30,000 tons.

At the DSM booth, a host of applications for biobased EcoPaXX polyamide 410 were on display, including the engine cover of the Mercedes-Benz A-Class, as well as the crankshaft cover for a new generation of fuel-efficient engines from

Volkswagen. The cast films based on EcoPaXX polyamide 410 by DSM development partner MF Folien were also being showcased; potential applications are said to be food packaging, as well as applications in medical, aviation and shipping, and building & construction. Another EcoPaXX application on show, replacing polyamide 6.6, was in building & construction: thermal breaks in aluminum window profiles that also contribute to the mechanical integrity of the windows.

Sweden-based Perstorp, a leading manufacturer of specialty chemicals, launched its Capa Thermoplastic products for bioplastics at K 2013. Capa acts as a processing aid, improving mechanical properties and accelerating biodegradation. Bioplastics with Capa can go to both domestic and industrial composting, helping to improve the end of life environmental profile of the bioplastic, says the company.

The Grafe Group presented its new product series Biocolen, a masterbatch that is not only suitable for coloring bioplastics, but also enhances performance for packaging manufacturers. The masterbatch improves the durability, achieving a higher flexibility and reducing the brittleness in the end product without impairing transparency. The masterbatch improves the temperature stability of PLA during the deep drawing process. One of the most important applications is in the packaging of microwave meals.

Under the tagline Bio & Beyond, Italian manufacturer of customized thermoplastic compound materials and elastomers API presented the newest additions to its range of TPE and TPU compounds, , which are now also available from renewable resources. Apilon 52 BIO is a bioplastic with a renewable raw material content of between 20 - 70% and with the same quality and processability of traditional oil-based TPU.

Metabolix was showcasing Mvera B5010, specifically designed for the compostable bag and film markets; along with the company's biobased performance additives for PVC, I6001 and I6003rp; and a number of additional biobased master batch and bio-composite resin products.