How 3D printing is enabling medical breakthroughs on a university budget 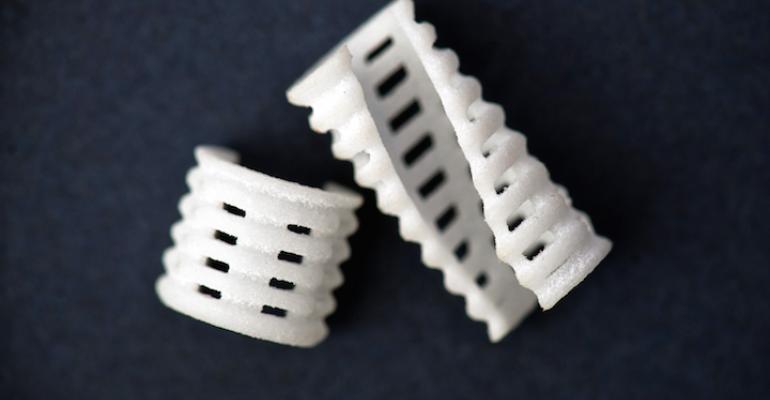 Back in May 2013, PlasticsToday reported on researchers at the University of Michigan who saved a baby's life by 3D printing a tracheal splint from polycaprolactone, one of many medical plastics that qualify as biomaterials. Since then, the cohort of children who have received 3D-printed tracheal splints has grown to five.

Back in May 2013, PlasticsToday reported on researchers at the University of Michigan who saved a baby's life by 3D printing a tracheal splint from polycaprolactone, one of many medical plastics that qualify as biomaterials. Since then, the cohort of children who have received 3D-printed tracheal splints has grown to five. The researchers are now preparing for a clinical trial for the tracheal splint and are applying 3D printing to the fabrication of a wide range of other patient-specific devices and implants. Within five years, they believe, many medical centers will be equipped to 3D print their own devices. In this feature article, contributed by the Parker Group and EOS GmbH (Krailling, Germany), a manufacturer of additive manufacturing systems that is supporting the research, the authors describe how industrial 3D printing technology is helping researchers to deliver medical breakthroughs on a university budget.

The first child to receive a 3D-printed tracheal splint is now nearly four years old and an active preschooler.  As planned by researchers at the University of Michigan, who used additive manufacturing (AM) to produce the splints in their laboratory, the boy's own tissues have successfully taken over the job of the implant, which has been almost completely resorbed by his body. As of today, four other children have been treated for the congenital breathing condition called tracheobronchomalasia (TBM).  All five continue to thrive thanks to the surgical procedures that helped their collapsed airways function normally and saved their lives.

The five lifesaving procedures took place under FDA Emergency Clearance; the surgeries were performed at C.S. Mott Children's Hospital (Ann Arbor, MI), which is affiliated with the university's medical school. Now the engineering and surgical team that designed, built and implanted the splints is applying for an Investigational Device Exemption (IDE) from FDA to treat an additional 10 patients. And they are preparing for a larger clinical trial that will compare the splint's performance against the traditional solution of keeping a child with TBM on a ventilator.

"We're at a state-of-the art stage now," says Dr. Scott Hollister, Professor of Biomedical Engineering, who conducts research with his team in the biomedical engineering department of the university. "We evolved the design a bit from the very first patient so it's now pretty automatic to generate an individualized splint design and print it; the whole process only takes about two days now instead of three to five."

According to team surgeon Dr. Glenn Green, a pediatric otolaryngologist, phone calls and e-mails from parents and doctors asking about the "4D-printed splints" (so called because the implant expands with the child's growth over time) continue to come in to his office. "We should not have any difficulty getting enough participants for the clinical trial," he said. It's estimated that one in every 2,000 children is affected by the life-threatening condition worldwide.

Green and his surgical team joined forces with Hollister to pioneer the patient-specific designs. The cross-pollination of ideas came about when the two were introduced by an alert colleague at the university: Green expressed a desire to try tissue engineering of babies' tracheas and the colleague knew that Hollister was working on 3D printing of engineered tissues.

Hollister's group is also developing cranio-facial, spine, long bone, ear and nose scaffolds and implants—and producing them all using AM technology solutions from EOS to laser sinter a material with characteristics that promote reconstruction and regrowth following birth defects, illnesses or accidents. While 3D printing is being adapted to serve an ever-widening breadth of industrial applications, it's this kind of clinical translation of the technology to patient-specific solutions that is making life-altering history in the field of medicine.

But there's no huge biomedical device company behind the tracheal-splint breakthrough. "Large companies must understandably pursue those therapies that can recoup costs and make profits," says Hollister. "Since we project that the tracheal splint will be needed for fewer than four thousand patients per year in the United States, we've begun by seeking a regulatory path through humanitarian device exemption."

So how did the relatively small university team achieve its feat of surgery-ready implants on an academic research budget? Computer-aided design (CAD) sped up the engineering side and 3D printing provided cost-effective, patient-specific production. "Even if a market is relatively small, this doesn't diminish the human need to be treated," says Hollister. "Our additive manufacturing process is very efficient, and the cost is the same whether you are making one or 1,000 splints."

FDA has been extremely supportive and helpful to the team's efforts to develop medical applications of laser sintering, Hollister notes. "This is a significant area of interest for them," he says. "They see the future of personalized medicine to be partly founded on the ability to make patient-specific devices and implants using AM."

Hollister first learned about AM in the 1990s from his former PhD advisor, who was using it to build complex structures designed with topology optimization software. "Later, when I started designing my own porous scaffolds for anatomic reconstruction, I realized that 3D printing would be useful for creating the complex geometries I had in mind," he says.

In 2006, Hollister and the University of Michigan purchased an EOSINT P 100 FORMIGA laser-sintering system to aid his research into scaffolds and biomaterials. "I chose EOS because we were looking for a system that was flexible and allowed us to change parameter settings like laser power, speed, bed temperature and so on, which we needed to do to customize our builds," he says. "Also, because biomaterials can be expensive and implants and scaffolds are typically not too large, we wanted a more limited build platform that didn't use a lot of material. The P 100 fit the bill for both."

Hollister's material of choice, polycaprolactone (PCL), was perfectly suited to Green's tracheal implant idea when the two men joined forces. "We use PCL for a number of reasons," says Hollister. "It has a long resorption time, which is very important for the airway application, because the implant should remain in place for at least two years and then resorb. And, two, PCL is very ductile and, therefore, if it fails it won't produce particles that could puncture tissue. Third, PCL could be readily processed for, and fabricated on, our laser-sintering system."

Additive manufacturing expertise was provided by EOS, which helped the team on site in its laboratory, providing advice on how best to prepare the material for production. While EOS offers a variety of proprietary materials for laser sintering of plastics and metals on different systems, the use of PCL was a first in this case.

"We make a point of being very open in terms of materials," says EOS Medical Business Development Manager Martin Bullemer. "We support academia in the development of their own parameters for novel materials on EOS systems and, if they are interested, with further guidance through an active consultancy such as this one with the University of Michigan."

Hollister welcomed the support. "EOS worked with us in the lab a great deal, helping us interact with the software that runs the P 100 and allowing us access with software patches to change the range of parameters of the machine to best sinter PCL," he says. "They did this specifically for our department, which was very helpful."

The researchers purchase their raw PCL powder from Polysciences Inc. (Warrington, PA) and have it milled into a target particle size range between 25 and 125 microns by Jet Pulverizer (Moorestown, NJ) under Good Manufacturing Practices (GMP) conditions. The laser-sintering parameters include bed temperature (48 to 56 degrees C), laser power between 1 and 5.4 W, laser scan speed (900 to 1800 mm/sec) and scan spacing (0.07 to 0.2 mm). "We published these parameters in a journal article in the ASME Journal of Manufacturing Science and Engineering, which makes the technology accessible," notes Hollister.  [The reference for this article is: Partee B, Hollister SJ, Das S "Selective Laser Sintering Process Optimization for Layered Manufacturing of CAPA 6501 Polycaprolactone Bone Tissue Engineering Scaffolds", ASME J. Manufacturing Science Engineering, 128:531-540. Contact Dr. Hollister [email protected] for a copy of this paper. In addition, Hollister notes, many other groups have published the same range of parameters for laser sintering PCL; see for example, Eshraghi and Das, Acta Biomaterilia (2010), and also Cahill et al, J. Mater. Sci. Mater Med (2009).]

With the first clinical trials on the horizon, in which manufacturing will be done at the University of Michigan on the EOS P100, Drs. Hollister, Green and their team are now focusing on meeting all the associated regulatory requirements for their work as it evolves and is applied to medical research and surgical solutions founded in AM.  They've published a paper with the Biomedical Engineering Society [The reference is: Hollister SJ, Flanagan CL, Zopf DA, Morrison RJ, Nasser H, Patel JJ, Ebramzadeh E, Sangiorgio SN, Wheeler MB, Green GE "Design Control for Clinical Translation of 3D Printed Modular Scaffolds", Annals Biomedical Engineering, 2015, 43:774-786, also available from [email protected]] that demonstrates how design control can be implemented in academic translation of scaffold-based tissue engineering therapies, using the examples of the tracheobronchial splint and a resorbable cervical-spine fusion cage.

"We're adopting a modular approach based around 3D printing to address the issues of expense for verifying and validating production processes," says Hollister. "We're trying to provide a roadmap for 3D printing of 4D biomaterials with FDA-required design control and standard operating procedures."

A wide-open future for medical applications of industrial 3D printing

While the University of Michigan collaborative group's work on the tracheal splint and other otolaryngology applications is certainly unique, Hollister notes that a number of universities and research centers are also actively pursuing AM to build patient models, surgical guides and implants. "Complete integration of patient-specific modeling, image-based design, simulation, and additive manufacturing technologies like laser sintering will enable an explosion of new medical devices and implants," he says.

His team is already investigating the use of other 3D-printed materials. "If we can expand the number of biomaterials used in laser sintering, we can tackle a tremendous amount of problems currently faced in all field of reconstructive surgery and make enormous strides for patients," he says. The group has already collaborated with EOS customer Oxford Performance Materials (South Windsor, CT) to make a non-absorbable tracheal splint out of PEKK (also laser-sintered on an EOS system, the high-temperature EOSINT P 800) for the 14-year-old girl mentioned earlier in this article. "We expect that her trachea is basically done growing," he says, "which is why we developed a splint from a permanent material."

The group is also looking into regenerative medicine therapies where they deliver cells-or even attach proteins and vectors for gene therapies-to the surface of 3D-printed materials.

The future role of AM is clearly wide open in the medical field, Hollister believes. "I see a time soon, probably within the next five years, when many hospitals and medical centers will print their own devices specifically for their own patients, and not need to get them off-the-shelf."