Plastic pallets continue to be attractive to thieves looking for a quick buck, as PlasticsToday has written before. But the thieves that made off with pallets from Intelligent Global Pooling Systems (iGPS) Company LLC, got more than they bargained for.

Plastic pallets continue to be attractive to thieves looking for a quick buck, as PlasticsToday has written before. But the thieves that made off with pallets from Intelligent Global Pooling Systems (iGPS) Company LLC, got more than they bargained for. The pallets from iGPS contained RFID tags for tracking the pallets and containers to help companies manage distribution and inventory. Those same tags helped Virginia State Police trace a large cache of misappropriated plastic pallets and containers at a pallet manufacturing and recycling firm operating in New Kent County, VA. 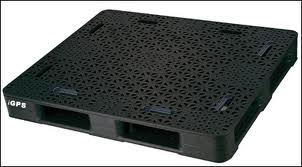 According to a release from iGPS, the law enforcement officials executed a search warrant, and confiscated business records and other items on the premises, and recovered a "large quantity of plastic pallets and containers." The investigation is ongoing.

"With the rising value of plastics, some individual have come to believe that they can steal and resell plastic pallets and containers with impunity," said Al Ferrell, VP of asset management at iGPS. "The police action in this case, and other investigations currently underway, should serve as a warning that technology exists to uncover this illegal activity and law enforcement officials are increasingly committed to stopping it and punishing offenders.

"Once again, our proprietary asset tracking technology has aided in locating illegal activities," added Farrell. "We look forward to continuing to work with law enforcement officials to identify and prosecute wrongdoers."

In other iGPS news, the company announced the appointment of Richard DiStasio as its new CEO, replacing Bob Moore. Officials at the company declined to comment on Moore or why a new CEO was named. DiStasio brings more than 30 years of executive-level experience at leading manufacturing, distribution and service companies, with both domestic and international scope.

Among his previous positions, Distasio served as President, CEO and Chairman of USF Corp., formerly known as USFreightways Corp., and CEO for Global Operations of Martin-Brower Company, the world's largest distributor of products to McDonald's Corp.

"I am thrilled to be joining iGPS, a company that is leading an exciting paradigm shift in the world's supply chain," DiStasio said in a prepared statement. "iGPS' innovative pallet and its associated tracking and tracing capabilities are truly revolutionizing how products are being shipped in North America."