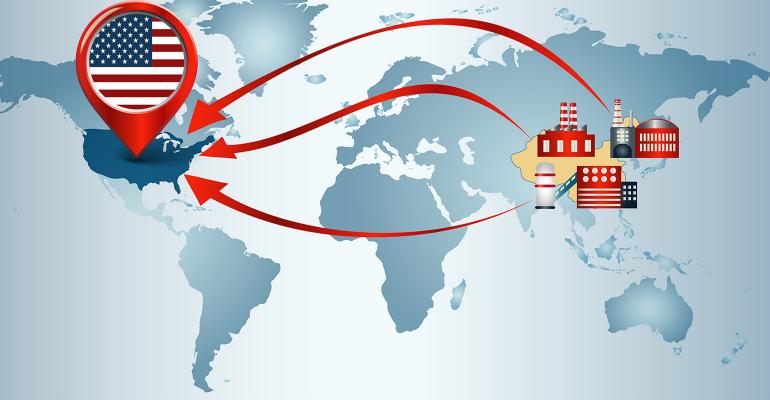 Reshoring is surging and could produce record jobs and economic value over the next 12 months, according to two new reports.

The Reshoring Initiative’s "2020 Data Report" shows that, despite COVID-19, reshoring was up in 2020, with cumulative job numbers pushing past the one million mark. Reshoring and foreign direct investment (FDI) job announcements for 2020 were 160,649, bringing the total jobs since 2010 to 1,057,054. Of significant importance, reshoring exceeded FDI by nearly 100%, the best percentage since 2013. Additionally, a record-setting 1,484 companies reported new reshoring and FDI activity. Reshoring will continue to be key to US manufacturing and economic recovery in 2021 and beyond, said Harry Moser, founder and President of the Reshoring Initiative.

“In order to make the United States less vulnerable, there are now national initiatives to shorten and close supply chain gaps for essential products,” said Moser, noting that industries most likely to benefit include PPE, medical, tech, and defense. “We anticipate 2021 reshoring plus FDI job announcements to be near 2000,000, up by at least 25%. With 5 million manufacturing jobs still offshore, as measured by our $900 billion/year goods trade deficit, there is potential for much more growth,” added Moser.

Thomas also released its findings in the “2021 State of North American Manufacturing Annual Report.” A provider of actionable data, analysis, and tools supporting industrial procurement, Thomas canvassed the North American manufacturing and industrial sectors. While the report reveals multiple shifts in domestic sourcing trends and supply-chain demands, the key takeaway is industry’s growing prioritization of reshoring in the aftermath of COVID-19 and the associated benefits of this shift for the US economy.

According to the Thomas survey, 83% of North American manufacturers are likely or extremely likely to reshore, up from 54% in March 2020. If these manufacturers bring on just one single-contract domestic supplier, the shift would drive as much as $443 billion in US economic value, said Thomas.

“We are witnessing the wholesale reexamination of supply-chain relationships, which will realign global manufacturing for decades to come,” said Tony Uphoff, Thomas President and CEO. “With North American businesses accelerating reshoring and replacing some of their overseas suppliers with domestic alternatives, US manufacturers are being presented with an unprecedented opportunity.

“The insights from this year’s [report] further underscore the need for increased investment in skilled labor and manufacturing technologies to ultimately improve the trade deficit and future-proof supply chains to protect against potential disruptions,” added Uphoff.

Participating suppliers were mostly OEMs and custom manufacturers from a variety of sectors with revenues spanning less than $4.9 million to more than $500 million. Survey respondents reported an average new supplier contract size of about $900,000. If 83% of the 579,811 US manufacturing companies were to engage with a domestic supplier on one new contract at that average size, this would total $443 billion in economic opportunity, according to Thomas.

Leading the charge toward US- and Canada-based operations are the automotive and oil and gas sectors, the verticals most motivated to add North American suppliers to their supply chains. Additional sentiment from survey participants reveals a strong interest in reshoring due to obstacles with overseas suppliers, such as availability of technical support and time zone differences.

While the procurement professionals surveyed did identify challenges to sourcing materials locally, including price barriers (40% of respondents) and speed (23%), the overwhelming majority of respondents still planned to reshore operations. Registered users of the Thomasnet.com platform are reflecting this trend, as well: Thomas has processed more than $204 billion in sourcing requests over the past 12 months, compared with $69 billion in calendar year 2018.

While things are moving in the right direction, there’s still room for improvement said the Reshoring Initiative’s Moser. “We call on the administration and Congress to enact policy changes to make the United States competitive again,” he said. “Our competitiveness toolkit is available to help quantify the impact of policy alternatives, including a stronger skilled workforce, competitive corporate tax rate and regulatory structures, and a lower US dollar.”