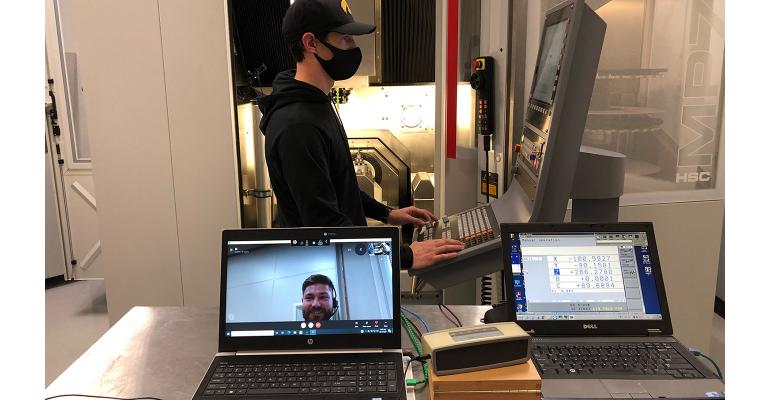 Electroform's Zack Clark sets up new EDM system with remote assistance from Exeron engineer Dominik Merz.
Since travel is not an option during the pandemic, Electroform collaborated with an Exeron GmbH engineer via the internet to set up the complex machining cell.

Neither rain nor snow nor sleet nor a pandemic, apparently, could stop Electroform from successfully setting up and making tooling modifications to a 5-axis Exeron machining cell with integrated automation. It accomplished that by working remotely with Exeron GmbH, based in Oberndorf, Germany, a manufacturer of electrical discharge machines (EDM) and high-speed cutting technologies. Zach Clark, son of Electroform CEO Wade Clark, collaborated with Exeron engineer Dominik Merz across the miles to set up the new machining cell and design the tooling modifications.

Wade Clark explained that the new linear 5-axis machining cell is not only extremely high precision, but also very complex. “Zach and Dominik installed the 5-axis cell in two six-hour days, with a programming follow-up for air chuck that took another hour and a half,” he said. “This was all done over the internet. Neither Zach, Dominik, nor Exeron had ever installed a machine over the internet before.”

“The biggest challenge that we came across was that we did not know exactly what went into setting up the new 5-axis milling machine remotely,” said Zach Clark. “Given that this is one of two Exeron 5-axis machines in the United States, both of which are owned by Electroform, we couldn’t simply reach out to a local technician.”

Electroform maintained ongoing communication with Exeron via a Go-Pro webcam. Given the time difference, Electroform had to work diligently in the morning — late afternoon in Oberndorf — which meant setup time was cut short.

By comparison, Wade Clark noted that the company recently had a 3-axis mill with no automation installed, and the manufacturer’s technician for that installation was there a couple days longer.

Merz and the Exeron team provided the expertise that helped setup go extremely well, given the difficult circumstances under which both companies were working.

“Remote setup was a big challenge, but I would do it again, depending on how professional the people on the other side are,” said Merz. “From my last visit to Electroform to set up their first machine [prior to the pandemic shutdown], I knew that the remote setup could work because their employees are very good. We worked really well together — kudos to them and their team.”

Wade Clark commented: “It was pretty amazing to see two young guys stepping up and working on a project together that most would not tackle. That is something that is needed in this industry.”