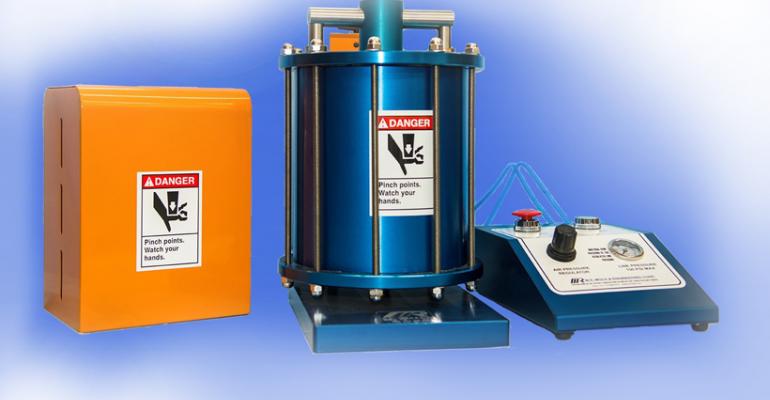 Moldmakers are more than just moldmakers. Most of them can do a lot more than follow the dimensions on a CAD file or stand at a CNC machine and watch chips fly. Moldmakers are innovative and creative, and most can come up with solutions that are way outside the box when it comes to making molds. Many even go beyond making molds and become equipment designers and manufacturers.

MGS Mfg. Group (Germantown, WI), through its tooling division, Moldmakers Inc., has long been known for the molds it makes that include multi-cavity, high-volume precision molds for a variety of markets. John Hahn, Vice President of Engineering for MGS, related how the company got into the equipment side (multi-shot machinery and automation systems), which today represents approximately 10% of the company's business. "Customer demand pushed us. First we were moldmakers and we built high-end molds for complex parts," said Hahn. "Then customers wanted us to build equipment for their molding operations. We don't say no, so we began building equipment for customers when they asked. Obviously we had to come up with more resources from time to time to accommodate these requests."

The business expanded when customers needed sampling for the two-shot tools that MGS built, so in 2000 the company designed and built rotary platens, along with a portable injection unit for internal use. "Then the customers came along and asked, ‘where can we buy this?' " said Hahn. "Everybody loved the portable injection unit and it was quicker than buying a two-shot custom machine. We could deliver it in half the time it took for them to get a custom press, it's flexible, and the molder is not locked into a dedicated two-shot machine. It's also modular, plug and play."

The LSR (liquid silicone rubber) injection unit came next. "It's a small market but we had a clean slate with respect to what we could do, so we have a different technology," Hahn explained. "Today we make 600-ton molding machines, 200-ton vertical clamp machines, and four-shot injection machines. The Automation Group designs, builds and validates automation systems in a standalone facility near the main plant. It's one of those things where customers say, ‘can you do this?' We can't say no, so we build it. We're looking at combining the automation business and the equipment business into a 60,000-square-foot facility this year."

Today, MGS has facilities in Ireland, New York, Illinois, China and Mexico, in addition to its Wisconsin operations. The company has moved beyond moldmaking to develop the equipment that processors need to achieve efficiencies, produce high-quality parts and reduce the cost of manufacturing.

Wade Clark, President of Electroform Co., a mold manufacturer in Rockford, IL, began building rotary tables several years ago. While it's a mature market, Clark said that it was "something we needed to do, as it complements the rest of our product offerings." Clark builds cube (rotating) mold systems and believes that the rotary tables his company developed and builds are more robust and have higher precision than competing rotary tables.

"It's a limited market because of the cost," he commented. "It's not an inexpensive proposition to make these tables; however, our customers who bought them are very happy with them."

Rick Finnie, President of M.R. Mold & Engineering Corp. in Brea, CA, said he didn't actually decide to get into building equipment for processing liquid silicone rubber (LSR). "It evolved because we wanted to make ourselves more efficient," Finnie commented. "The development of the cold runner system came about because we were purchasing systems to use with our molds. Our customers began commenting on how they wished we could make some significant improvements in the systems. We listened to our customers and designed and developed our own cold runner system, along with a valve gate controller. At the time, molding machines rarely had that capability."

Finnie also developed a pneumatic stuffer box, which evolved because it was costing the company far too much time and money when sampling each mold. "We had to tear down the entire pumping unit for the next material," he explained. "Putting our heads together, we came up with a way to bypass the pumping unit and make our lives so much easier."

M.R. Mold & Engineering continues to respond to industry requirements and looks for ways to become more competitive with the overseas market, including designing and building automation equipment. "Automation has become very important," he said. "Our robotics and end-of-arm tooling are designed and built for each individual project to help our customers be more competitive."

Today, 80% of the LSR molds that Finnie's company builds have a cold runner system and robotics to enable them to be fully automatic. Every LSR mold has vacuum seals, except where geometry prohibits.

Finnie added that designing, developing and building equipment provides his customers with greater value-added solutions to the challenges they face. "It makes us a complete systems provider and gives us control over both the design and cost of these LSR mold systems," he said.