Almost immediately after my blog on A.T. Kearney's latest reshoring study hit the in boxes of PlasticsToday readers, I heard from Harry Moser—manufacturing's champion of reshoring—with a rebuttal of the Kearney study. I actually had a premonition that I'd hear from Harry. He keeps a sharp eye out for any reshoring article that appears in the media, ready for bear.

Almost immediately after my blog on A.T. Kearney's latest reshoring study hit the in boxes of PlasticsToday readers, I heard from Harry Moser—manufacturing's champion of reshoring—with a rebuttal of the Kearney study. I actually had a premonition that I'd hear from Harry. He keeps a sharp eye out for any reshoring article that appears in the media, ready for bear. 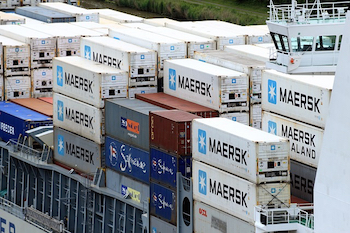 Conflicting information seems to abound in the reshoring arena, and there are a number of reasons for that. Surveys contain many variables depending on who developed the survey, the way the questions are posed and the intention of the survey. Obviously the goal is to make the surveys as objective as possible, but numbers are funny things. As part of my journalism curriculum at Arizona State's Walter Cronkite School of Journalism, I had to take a statistics class. I was told there wouldn't be much math in the class (thank goodness!) and that most of the journalism students opted for this political statistics class because it was more about trends and gaining an understanding of what statistics are telling us. I remember on the first day of class the teacher telling us that the first rule of statistics when evaluating surveys is that the surveyors can make the numbers say anything they want them to say. I've never forgotten that and try to keep it in mind, especially when I'm looking at all of the various surveys on reshoring.

The A.T. Kearney study appeared to offer further proof that U.S. manufacturing is still waiting for the reshoring phenomenon to happen. "Companies that study this sort of thing have been saying the same thing for several years—it's anecdotal; it's coming in dribs and drabs; it's a job here and a job there. But there have been no tsunamis—nor should we expect there to be," I wrote.

It's rather like the blog I wrote exactly a year ago on Kearney's 2014 reshoring study. And, again, Moser is challenging the Kearney study: While A.T. Kearney "got some things right," Moser wrote to me in an email, other things in the study were "clearly wrong."

Moser offered some information on the Foreign Direct Investment (FDI) and reshoring, which are, noted Moser, "essentially the same phenomenon, just parent company headquarters in different countries. In both cases, the company decides it is more profitable to serve the U.S. market from a U.S.-based factory instead of from a foreign factory." What A.T. Kearney got right, according to Moser, is that FDI is strong. "In fact, in 2015 it is stronger than reshoring," he said.

What Kearney got wrong, claimed Moser in his rebuttal, is the number of reshoring cases per year, which Kearney's data showed as being off by 70% from 2013 to 2015 projected. "Our database shows a smaller (40%) reduction, but reshoring still remains at about twice the 2011 level," said Moser.

Another point that the Kearney study "got wrong," according to Moser, is the suggestion that jobs leaving China are preferentially going to Mexico, rather than the United States. "Certainly, some jobs are. However, a recent survey by Alix Partners showed the United States [was] favored over Mexico by 55% to 31%."

Moser isn't buying Kearney's claim that the "reshoring trend seems to be over," offering evidence from "repeated surveys by the Boston Consulting Group, Alix Partners and Medical Design Technology" that show an increasing trend in reshoring, or at least that a commitment to reshore is increasing. "I spoke to AGMA and ABMA [gear and bearing manufacturing trade associations] in May 2015," said Moser. "In a poll of attendees, 54% had reshored or their customer had. From a longer-term perspective, reshoring cannot ‘be over.' The world will not allow a half-trillion-dollar U.S. trade deficit to continue indefinitely. If we do not fix the problem in the next five to 10 years, the dollar will fall dramatically, making reshoring and FDI easy, but with a smaller U.S. market to serve."

Next, Moser pointed out that A.T. Kearney's Reshoring Index does not actually measure reshoring. "It essentially uses import trends to imply a trend in reshoring. The Reshoring Initiative measures reshoring directly," Moser stated. "Since the United States has one of the world's fastest growing economies now, it tends to import more."

Providing an overview of Kearney's study, Moser commented that Kearney's 2014 survey "provided much more data from their analysis" (see my blog noted above). "The data made it possible to identify errors in the analysis," he added. "Reshoring is not such an accepted, proven, mainstream trend that companies and journalists are no longer mentioning it. Published reports of reshoring are almost always about OEM cases. Supplier cases are just orders, rarely documented as reshoring. I suspect we are going through a digestion phase in which the OEMs are simplifying their supply chains and sourcing more domestically."

Moser noted that a stronger dollar inevitably hurts the reshoring trend. "The decline in the rate of reshoring, which peaked in 2013, coincides with the USD rise that started in mid-2014," he said. "Before the 20% to 25% increase, the USD was already too high, judging by our then approximate $500 billion trade deficit.

"Some of A.T. Kearney's statements were completely misleading, chosen to get attention," concludes Moser. "They succeeded to the disadvantage of U.S. manufacturing. Recognition of the strength of the reshoring trend is a major factor driving companies to reevaluate offshoring and many individuals to choose manufacturing technology training, helping to fill the skilled workforce gap."

Moser said he believes that it is clear that about 25% of what is now offshored would be economically reshored today if companies calculated based on total cost of ownership (TCO) instead of wage arbitrage or purchase price variance (PPV) to make sourcing and siting decisions. "A.T. Kearney would better serve its clients and country if it helped educate companies rather than discouraging them," added Moser.