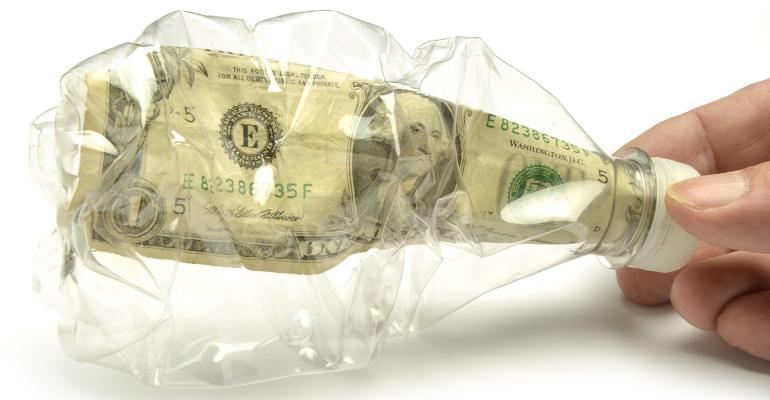 The REDUCE Act would levy a 20 cent per pound excise tax on virgin plastics in single-use products to fund a plastic waste reduction fund.

Yet another government "solution" to the plastic waste problem has come to the surface. The introduction of the REDUCE (Rewarding Efforts to Decrease Unrecycled Contaminants in Ecosystems) Act by Senator Sheldon Whitehouse (D-RI) proposes to levy an excise tax of 20 cents per pound on virgin plastics in single-use products. Taxes collected under the REDUCE Act would then go to a plastic waste reduction fund.

When it comes to government solutions, it’s easy: If you don’t like it, tax it to death. Except that strategy seldom works. As for that “fund” that promises to use the money collected by the government, who is going to oversee that the money gets to where it was promised and actually help? The government has never been good at being accountable and transparent, so I don’t expect it to begin with the REDUCE Act.

In a statement from the US Public Interest Research Group (PIRG), Alex Truelove, Zero Waste Director, commented: “The premise of this legislation makes sense: A fee on virgin plastic in single-use products would encourage manufacturers to use more recycled. That’s good, because making new plastic is harmful and resource intensive.” However, the PIRG also noted that while the bill would reduce virgin plastic production, it wouldn’t necessarily reduce pollution.

Companies forced to pay an excise tax on the materials or products they make generally just pass along the price increase to their customers, who then pass it on to consumers. The plastic cup that holds the drink you ordered at the fast food restaurant will cost the restaurant owner a penny or two more, so the owner will then raise the price of the drink by a nickel.

The American Chemistry Council Vice President of Plastics, Joshua Baca, noted that the REDUCE Act “takes a piecemeal approach by adding an excise tax on certain plastics sold, plus a series of confusing rebates that appear to pick winners and losers among consumer product companies, with some paying the tax and others receiving a rebate. Such a scheme would essentially punish producers of valuable American products without advancing a circular economy for plastics.”

Companies that make single-use items for medical applications, for example, would be exempt from the excise tax, and could even qualify for a rebate for any taxes paid.

The PIRG is not overly excited by this proposed bill. “Even if a plastic container is made up of recycled products, it’s still pollution if it ends up in the ocean. The only way to address that pollution is to make and use [fewer] single-use plastics,” stated Truelove. “We need to take a more comprehensive legislative approach to plastic waste.”

The excise tax on single-use plastics might provide some incentive for brand owners to switch to alternative materials, such as paper and metal, but the problem is that both of those use significantly more resources — water and energy — than plastic does.

The ACC’s Baca noted that in July, the organization called on Congress to take “five actions to accelerate a circular economy, including requiring all plastic packaging to include at least 30% recycled plastic by 2030 through a national recycled plastics standard.”

Requiring a greater percentage of recycled resin in single-use products would mean we need to collect and recycle greater amounts of plastic waste. “We can only recycle what we actually collect and divert from landfills and incinerators,” noted Truelove.

The ACC’s five actions proposal includes “establishing an American-designed producer responsibility system for packaging to help raise funds to increase recycling access, collection, and outreach for all materials, including plastics,” said Baca. “The five actions represent a comprehensive, national strategy to confront the challenges of plastic waste head on.”