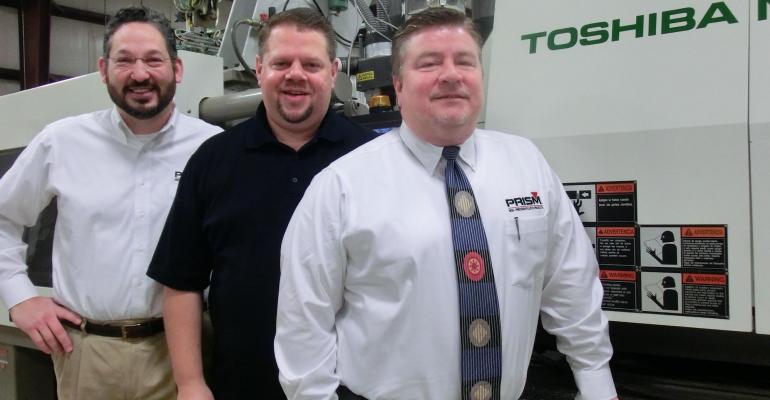 The last two decades have been a roller coaster ride for many molding companies and their employees. But for three long-time plastics industry management people, the lessons learned have been incorporated into their injection molding business, which started out small but has seen good growth and expansion.  Three partners, all vice presidents, are Rod Bricker, Gerry Phillips and Jerry Williams. The trio started Prism Plastics LLC.

The last two decades have been a roller coaster ride for many molding companies and their employees. But for three long-time plastics industry management people, the lessons learned have been incorporated into their injection molding business, which started out small but has seen good growth and expansion.  Three partners, all vice presidents, are Rod Bricker, Gerry Phillips and Jerry Williams. The trio started Prism Plastics LLC. in November 1999, and opened their first molding facility in 2000, just as the first "mini-recession" was beginning to hit the industry.

In a conversation with PlasticsToday, Gerry Phillips talked about the strategies that have made Prism Plastics successful in

a decade that for many molders, has been anything but. "When we started Prism Plastics, we said we weren't going to be a Tier 1 automotive supplier," stated Phillips.

Steering clear of being a Tier 1 molder...in Michigan

That was a hard promise to make given that the facility was located in Port Huron, MI, home at one time to some very large, successful Tier 1 molding operations that served the automotive industry. And in fact, Phillips noted, the company is currently 99% automotive. "We supply the Tier 1s like Autoliv, Key Safety, Takata, Group Antolin, and TI Automotive, focusing entirely on tight tolerance safety components, that are functional parts that must fit together perfectly and are difficult to mold," said Phillips.  "We ship over 250 million of these small parts a year and most are shipped globally to Tier 1 plants all over the world."

The second business decision the trio made was to keep plants small and the mix of product, molds, and materials low. "We'd been with big plants throughout our careers when we worked together at Huron Plastics Group back in the 1990s when its seven plants had 1000 employees and $100 million in sales," explained Phillips. "At that time, it was family-owned and a well-run company. It was bought by LDM, and ultimately Plastec, which is no longer in operation."

Phillips and his partners left LDM and formed Prism Plastics, believing that there was a place for a well-run, well-thought out privately-held company that could serve the automotive industry and be successful. That success however, was going to be driven by small, focused facilities. "We thought about one plant with 45 presses, but decided that multiple plants with 15 presses each was the model we wanted to pursue," Phillips said. Currently, Prism's Port Huron plant has eight presses, all Toshibas and all-electric with full automation, in 15,000 sq ft of space.

Prism Plastics has seen a tremendous amount of growth since 2005. The company opened its second facility in Harlingen, TX, with 30,000 sq ft in 2005, with 10 presses currently operational and serving Tier 1 suppliers in Mexico. "We chose our Texas facility because of Harlingen's proximity to Mexico," said Phillips.  "Almost 100% of the product we mold there goes to Mexico, to companies that specialize in the seat belt retractor business, and assemble these products in Mexico."

This month, Prism announced the opening of a 25,000-sq-ft plant in New Baltimore, MI, which will be fully operational by March. Initially, this facility will house seven presses ranging from 85 to 390 tons, running four shifts, 24-hours a day, seven days a week. Like the other two plants, the new facility will house all-electric Toshiba presses with Yushin 5-axis robots, SRS low RPM screenless grinders, automated packaging systems, Advantage closed loop central chillers, and a fully integrated IQMS ERP system. Ultimately, they plan to put 15 presses into this plant, and will hire 11 employees by March.

"The biggest plant we'll ever have will be 15 machines," said Phillips. "We want tightly controlled plants with tightly controlled processes, which means we don't mix tonnages-the highest we have is 390 tons-and if we can, we do all like materials, like products for similar customers."

Prism Plastics subcontracts its moldbuilding to "a select group" of experienced mold shops with which the company has had long-term relationships. "We carefully screen our mold suppliers to ensure that we're getting the best," Phillips noted.

Phillips explained that having a lower level of complexity (the mix of molds, materials, presses and customers) in each plant makes it easier to control and increases the level of quality. "The higher the mix and the larger number of presses you have in a plant, the greater the chance you have for an out-of-control situation," he commented.  "We've found that with many of these big plants, you're running from fire to fire, and that's no way to run a business."

Prism also molds a small number of part numbers but each one is very high volume. "We mold a lot of global parts because our product lines are seat belt retractor components, connectors, and air bag components, and we optimize our operations using automation, which means that more than 90% of our parts are never touched except for quality checks," Phillips said.  "We try to utilize technology to the fullest extent we can.  Anyone can buy equipment but we really take advantage of all the capabilities of that technology and optimize it.  The key is repeatability and automation to produce error free products."