Life after a ban 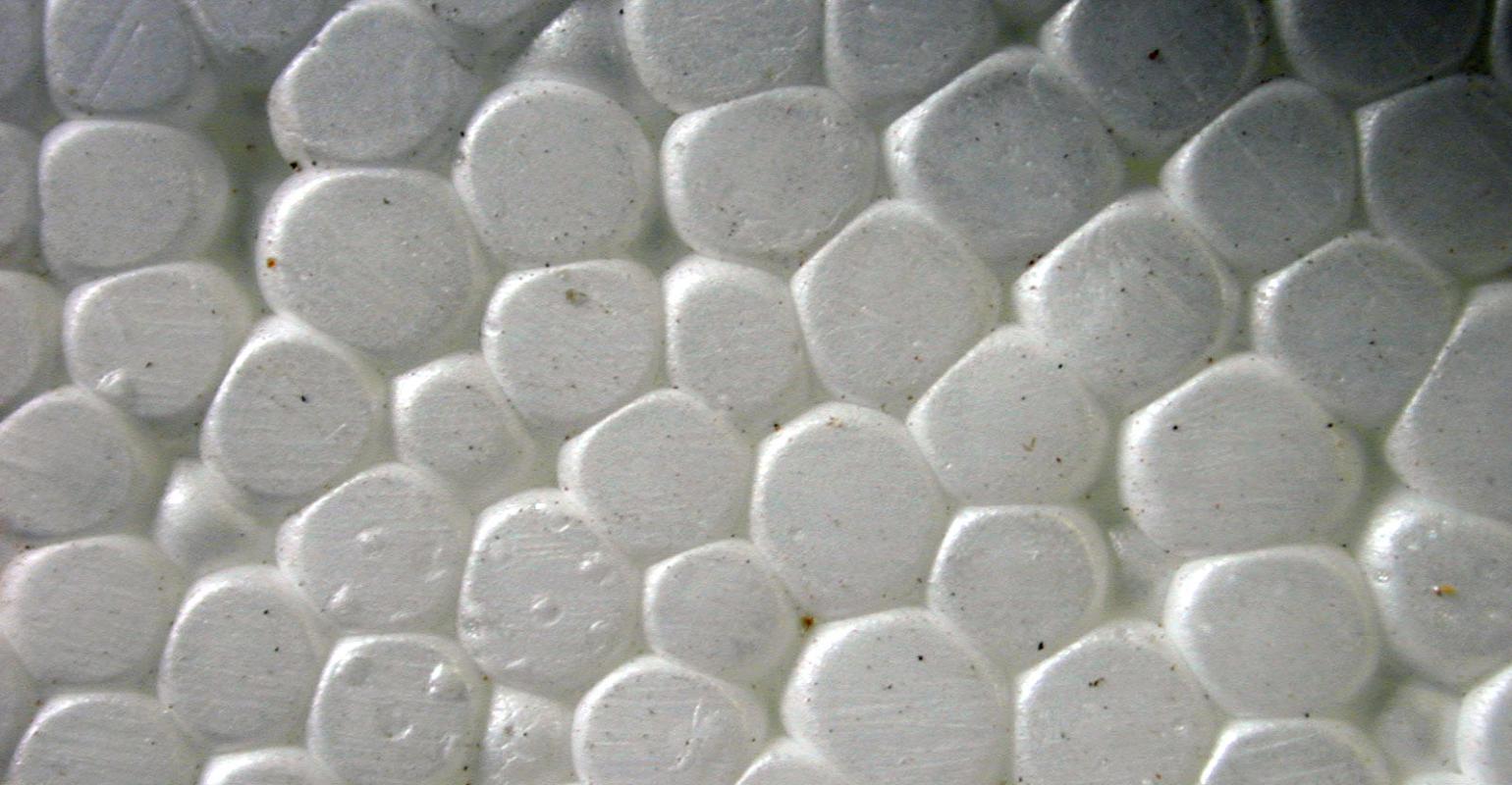 In 2007, San Francisco said goodbye to polystyrene foam foodservice packaging and never looked back.  That year, an ordinance went into effect that prohibited the use of EPS foam in foodservice establishments. The city specified that the alternative material must be compostable or recyclable.  However, when the city issued the ordinance, it said that any restaurant could apply for waiver if the ban created any type of economic hardship. Out of the 4500 food establishments that were affected by the ban, only two asked for the waiver.

That year, an ordinance went into effect that prohibited the use of EPS foam in foodservice establishments. The city specified that the alternative material must be compostable or recyclable.

However, when the city issued the ordinance, it said that any restaurant could apply for waiver if the ban created any type of economic hardship. Out of the 4500 food establishments that were affected by the ban, only two asked for the waiver.

Jack Macy, senior commercial Zero Waste Coordinator for the San Francisco Department of the Environment, told PlasticsToday that there wasn't much resistance from food vendors because many had already switched to alternative products. 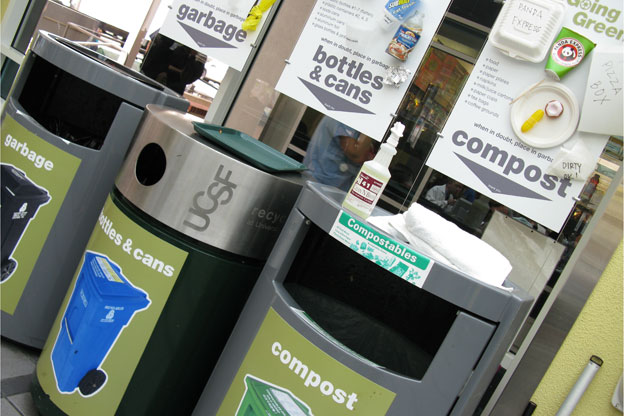 Over a three-year period after the passage of the ordinance, studies showed a 41% decrease in polystyrene litter. Those who participate in the city's food scrap and compostable collection program can receive discounts up to 74% of their garbage.

"We had upstream and downstream concerns with polystyrene so we wanted any disposable food items serviced in the city to be compostable or recyclable," he said. "When that policy went into effect, it increased the use of more compostables in San Francisco."

The ban also helped the city toward its goal of zero waste by 2020.

Composting is accepted, but it's complex
Still, implementing such a large initiative is never easy. Especially, when many alternatives are tainted by greenwashing claims.

"The problem with the term biodegradable, you can argue that everything is eventually biodegradable in a time frame," Macy said. "It's misused and so misleading. That's why compostables must have verification, which can help with the problem of greenwashing."

One key challenge is the general confusion about biobased materials since biomaterials don't always equal compostable, but sometimes consumers believe they do.

"You do have companies out there that come up with compostable products, but don't necessarily label it as such," Macy said. "They need to communicate what will happen to the products at the end of their life. Hopefully, we'll see compostable foodware become more prevalent, but again companies have to include the end of life in their design and really think about what they are communicating about what will happen with the product."

"The biggest challenge with composting compared to recycling is that a lot of people have never done it," he said. "Composting is really changing the entire dynamics of a business, especially if you're in restaurants - everyone is contributing and you have to train employees or it doesn't work. There's a big difference between recycling and composting."

Matsch said "biodegradable" plastics that claim they are compostable is an issue for compost facilities.

"It's a huge pain in the neck for us, there's so much greenwashing," he said. "A lot of companies that have jumped in that arena, I believe they don't realize that they are creating something that is just greenwashing that doesn't benefit anyone and it's very challenging to the customer."

With regards to composting becoming the norm, he believes the country has a long way to go.

"It's sort of a chicken and the egg thing - if you manufacture something that is designed for a collection program still in its infancy, you have to sort of roll it out slowly as the collection infrastructure gets in place," he said. "Regardless, I think the plastics industry, and really any manufacturer these days, has to stop putting stuff in the landfill. It's going to happen with collaboration at the design table and focusing on the customer, making it crystal clear to the customer how you need to dispose of this packaging."

The future is mushrooms?
Ecovative Design has gotten plenty of attention in recent months. The material science company is developing a new class of home-compostable bioplastics based on mycelium, a living organism. The company touts its mushroom materials as high-performance, environmentally responsible alternatives to traditional plastic foam packaging, insulation, and other synthetic materials. 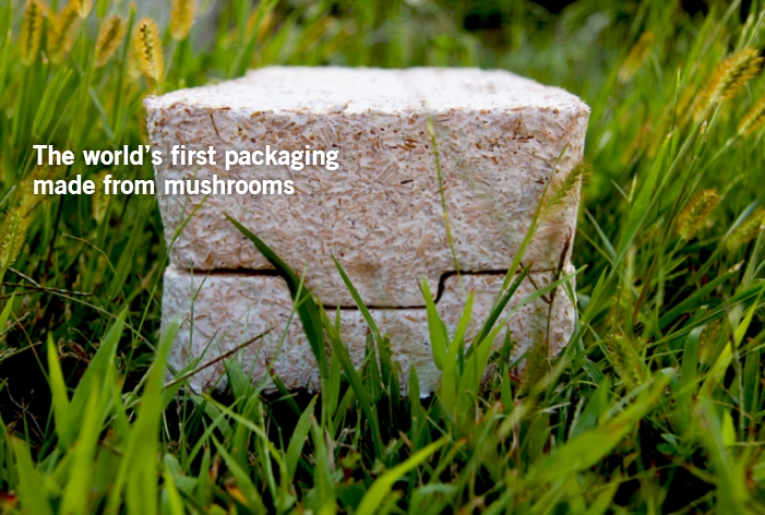 Sam Harrington, marketing for Ecovative Design, said founders Eben Bayer and Gavin McIntyre were fascinated by mushrooms growing on wood chips and observed how the fungal mycelium strongly bonded the wood chips together. This inspired them to think of new ways of using mycelium as a resin. They formulated a new process for binding together insulating particles, creating materials that could replace PS foam. Rather than just decreasing the environmental impact of conventional polystyrene foams, this invention created a whole new paradigm where composite materials are literally grown, harnessing the efficiency of nature.

Ecovative is now a team of about 60 people and delivering materials to Fortune 500 customers.

Ecovative's patent-protected process uses mushroom technology to convert agricultural waste like corn stalks and cotton burrs into a renewable, cost-effective, home-compostable alternative to plastics. The company uses mycelium (mushroom "roots") to bond together agricultural waste particles such as seed husks or plant stalks. This growing process happens indoors, in the dark, in less than a week. The resulting Mushroom Material is then dried, which stops the growth.

The company's first product, Mushroom Packaging, targets the protective packaging industry and is currently in use by Dell, Crate & Barrel, and PUMA. 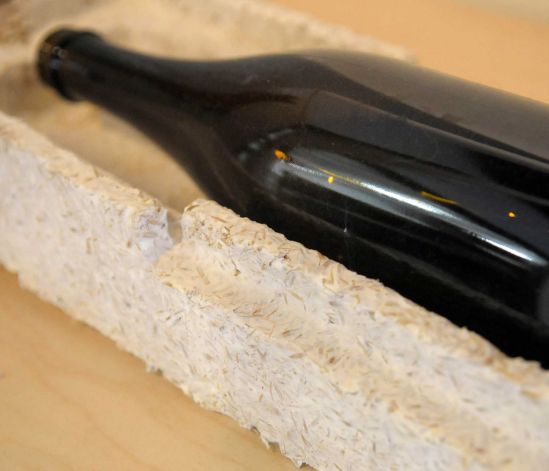 Although the resulting chitinous biomaterial is technically a bioplastic, it does not form or mold with heat. Instead, the mycelium is chemically transforming nutrients in agricultural byproducts into a new material.

"It's analogous to how lobsters grow a plastic-like shell at room temperature without any machines," he said. "Ecovative has designed, developed and now sells a complete suite of specialized equipment to partners who are have licensed our Myco Technologies for specific markets."

With regards to cost of the material, Harrington said they are projecting that the company will be able to meet or beat PS prices for all applications. They believe the difference is that rather than using petroleum-based resource with volatile pricing, they are using renewable agricultural byproducts that are limitless.

When it comes to PS foam bans; Harrington said they are encouraged by them.

"Polystyrene foam and all plastics have some incredible properties that have done a great deal to advance human prosperity, but there have also been dire ecological consequences, some of which we are only starting to understand," he said. "Current solutions, like recycling and take back programs are likely to be insufficient to stop the growth of the plastics collecting in ocean gyres, landfills, and throughout our environment. As bio-compatible alternatives, like Mushroom Packaging, become viable, it would certainly help to have some legislative drivers to promote and accelerate the adoption of compostable material technologies."

As of now, the bans on polystyrene thus far have focused on cups and restaurant to-go containers. The company isn't able (yet) to make these food service items.

However, Harrington said there are rumblings of bans, taxes or mandatory EPR (extended producer responsibility) programs relating to protective packaging plastic foams, which he believes "would help speed the industries shift away from expanded plastics towards better options."

"We believe that we can replace most expanded plastics and foams, including EPS, EPP and EPE," he said. "This is nothing short of a material revolution. Just as we've seen our world transformed by petroleum-based plastics over the last 100 years or so, we expect a new biomaterials revolution, including Ecovative's Mushroom Materials to define our next 100 years of human progress."