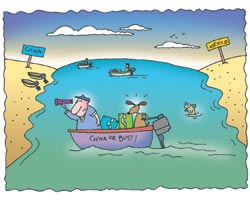 Cheap and plentiful labor, along with the ability to ship components into Mexico duty-free as long as the finished goods were exported, was the carrot for many U.S. and Asian manufacturers to move operations south of the border over the past three decades.

Now, Mexico is hearing a giant sucking sound from the Far East. China, with its plentiful and even cheaper labor, is luring manufacturing away from Mexico. With it goes the promise of good jobs and a better life for thousands of Mexican people. The maquiladora legacy has taken an ironic twist: higher wages but fewer jobs.

One report noted that more than 500 foreign-owned factories have closed over the past two years, in large part because an entry-level worker in Mexico makes nearly four times what a Chinese entry-level worker earnsâ€”$2/hr vs. $.50/hr. Some 250,000 factory workers along the U.S.-Mexico border lost their jobs during that time frame.

Asian companies were some of the first to set up shop in Mexico, particularly in the consumer electronics industry where lots of labor-intensive assembly is required. Benefits included the ease of shipping bulky items such as large television sets to the U.S., a primary market for consumer electronics OEMs due to the geographic proximity.

Things have changed. Sales of consumer electronics have declined in the U.S. Sales in Central and South America and Asia have increased. A spokesman for LG Electronics recently told a group of plastics industry professionals that U.S. market softness will continue.

Following Customers
Technimark Inc.â€™s president, Don Wellington, says that the molding business in Mexico is like a roller coaster ride. The Asheboro, NC-based company has three facilities in Mexico, in addition to three plants in North Carolina. â€œWe followed [customers] to Mexico, and now theyâ€™re not as sure Mexico will cut it anymore because of increasing labor rates,â€ says Wellington. â€œMexico and China are competing neck-and-neck all the time. You just about need to have your molding machines on roller skates.â€

Wellington points to one customer, a maker of consumer products, that decided at the last minute to tool a new product in China  rather than Mexico. Overnight, Technimark lost $8 million in business from the plant in Mexico that served the customer. â€œYou know changes like this will happen, but the speed of these changes is whatâ€™s frightening,â€ says Wellington.

Operating in todayâ€™s global marketplace is a huge challenge for molders primarily because of the volatility as companies continue to chase the low labor rate, explains Wellington. â€œThe Chinese are ravenous,â€ he says. â€œThey want anything they can get their hands on, and the Chinese workers make less than a dollar an hour, which gives them a tremendous labor advantage.â€

Asian OEMs Feel the Pinch
As Asian markets pick up and consumers there gain greater disposable income, sales of consumer electronics could easily outpace U.S. sales. That gives Asian OEMs a good incentive to manufacture in China. Another incentive to leave Mexico is the 18 percent duty companies operating in Mexico pay on components coming from China.

A poll taken in March by the Japanese Maquiladora Assn. showed that 40 percent of the 71 companies surveyed were considering eliminating some operations or moving entire factories elsewhere. This reflects the changing climate in Mexico since new tariff regulations were put into effect in January 2001. Those new rules removed tariff exemptions for maquiladora companies in an attempt to bring Mexicoâ€™s policies in line with those of the U.S. and Canada. To compensate for the resulting increase in costs, Mexico created 20 special categories in which companies pay up to 5 percent tariffs on thousands of items imported from outside the NAFTA region.

For materials that fall outside these categories, however, companies pay the equivalent of the difference between the highest tax in the NAFTA region and the lowest.

Japanese OEMs represent the second largest group of maquiladora companies in Tijuana, and they havenâ€™t been happy about the changes. These added costs come at a time when competition for consumer electronics is fierce and prices are ratcheting downward in an effort to gain market share.

In March of this year, Canon Inc. announced its decision to close Canon Business Machines Inc. of Costa Mesa, CA and the manufacturing plant in Tijuana, Mexicoâ€”Canon Business Machines de Mexico SA de CV. A competitive environment for its products and a soft U.S. market were the reasons given for the decision. Both companies made ink jet printers and related consumables for the U.S. market. Operations ceased at the end of May, idling around 30 office workers in Costa Mesa and more than 400 production workers in Tijuana.

A statement released by the company said that â€œbecause of the rapid drop in prices and fierce competition for higher performance of ink jet printers in the marketplace, Canon has been continuously challenged to find ways of achieving more efficiency in its ink jet printer business operations. Consequently, in accordance with the companyâ€™s production strategy, Canonâ€™s overseas ink jet printer manufacturing will be centralized in two Asian factories, one in Thailand, the other in Vietnam.â€

Outlook for U.S. Molders
The move of these companies to Asia affects U.S. molders as well. Many molding firms have molded components for a variety of Canonâ€™s office equipment since Canon established U.S. operations in 1974. SimRidge Technologies (formerly Arizona Jacobson) in Tempe, AZ was a primary, award-winning supplier to Canon for many years. However, the work began gradually moving offshore and the company hasnâ€™t done any molding for Canon for more than a year, said a company spokesperson.

Technimarkâ€™s Wellington strongly believes there are advantages for manufacturers in Mexico vs. China. He cites the cost of transporting finished goods to major markets in North America; the cost of increased inventory companies must carry due to a six-week shipping time vs. a week or less from plants in Mexico; and the ability of manufacturers in Mexico to react quickly when consumer demand in North America spikes during peak buying seasons.

Still, the impact of currency valuations keeps business uncertain and in a state of flux. When the relative price of pesos per dollar increases, the costs go up because manufacturers must buy pesos with U.S. dollars to pay employees, Wellington explains. â€œNow weâ€™re seeing a swing back to around 10 pesos to the dollar, which is making Mexico more competitive with China,â€ he says, adding that one customer was ready to pull work from Technimark and send it to China.