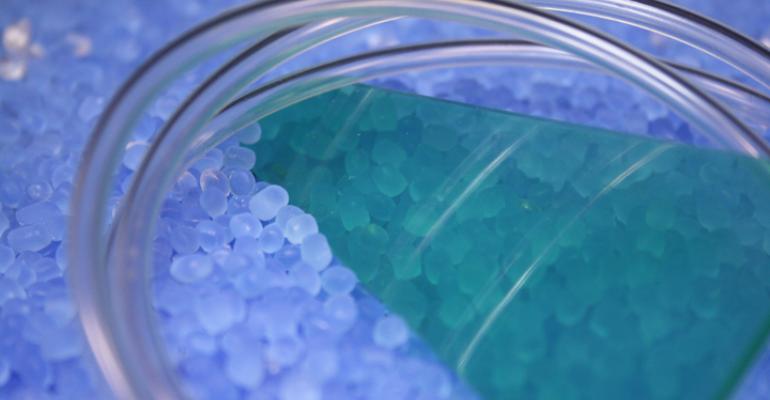 "We always say that PVC is a good product," Jill Bradford of Elasto UK Ltd. (Manchester, UK), part of the Hexpol TPE group, told me from the company's stand at Fakuma in Friedrichshafen, Germany. But—and you knew there would be a but—thermoplastic elastomers (TPEs) can be an attractive alternative. That message came through loud and clear at the stands of Elasto and Actega, among other materials suppliers.

"We always say that PVC is a good product," Jill Bradford of Elasto UK Ltd. (Manchester, UK), part of the Hexpol TPE group, told me from the company's stand at Fakuma in Friedrichshafen, Germany. But—and you knew there would be a but—thermoplastic elastomers (TPEs) can be an attractive alternative. That message came through loud and clear at the stands of Elasto and Actega, among other materials suppliers.

PVC advocates will tell you, rightly, that so-called health concerns regarding PVC are really about DEHP plasticizers, which have been linked in some studies to risks to the human reproductive system, and that a range of different plasticizers have been developed over the years to replace DEHP. While the "PVC-free" movement may be irrational from a scientific point of view, you can't fight public opinion.

"The demand for PVC alternative materials is coming from further downstream," says Bradford, and her company's customers are forced to pay attention. While TPE is more expensive than PVC, use of the material "allows manufacturers to say that their products are PVC free," adds Guido Heinen, Key Account Manager, Medical, at the Belgium offices of Elasto. "It's a public relations advantage. You may recall that one of the largest healthcare insurance providers in Germany made the decision to deny reimbursement when PVC devices were used," says Heinen. "Industry pushed back and the insurance body ultimately backtracked, but it's an indication of where things are headed."

TPEs are also being specified for new products, not just as replacement materials. In addition to membranes, tubing, catheter parts, and patches, TPE is being used in very specific products under development, adds Bradford.

Elasto took advantage of the Fakuma platform to present its portfolio of colored, transparent TPE compounds. The Mediprene materials offer crystal-clear transparency with the addition of color for product identification purposes and branding. The use of blue or green coloration is also beneficial to offset the yellowing that occurs in medical devices undergoing gamma sterilization.

Mediprene compounds are made only from medical-grade raw materials, and the color masterbatches comply with USP Class VI guidelines or ISO 10993 standards, as applicable, and are manufactured under rigorous traceability and consistency controls. Quality systems comply with ISO 13485, the international quality standard for medical manufacturing. The compounds are available in 30 to 90 Shore A hardnesses in 5 Shore A increments.

Although Actega (Bremen, Germany) supplies both PVC and TPE, it is "not focusing as much on PVC," says Business Development Manager Dennis Siepmann. "Yes, TPE is a little more expensive than PVC, but it has a better toxicological profile and largely the same mechanical and optical properties," he says. In the past, TPEs have not been able to fully duplicate the properties of PVC, but it seems that issue has been resolved in the view of many companies, and the sole differentiator now is cost.

Actega historically has captured significant market share in the production of soft sealants for a range of food and beverage closures. With that market well in hand, "we asked ourselves what else we could do with our expertise, and medical immediately came to mind," says Siepmann.

The company has had some involvement in medical applications for approximately 15 years, but it ramped up its efforts about five years ago. Typical current applications include tubing, syringes, stoppers, and breathing masks; others are in the pipeline but Siepmann is not at liberty to talk about them.

Actega is firmly committed to the medical market, Siepmann adds, noting that the company has a staff of five in R&D just for medical applications. The company also has carved out a niche in supplying so-called vegan materials with no animal-derived additives. "It's one of our specialties, and it is a growing market," says Siepmann.