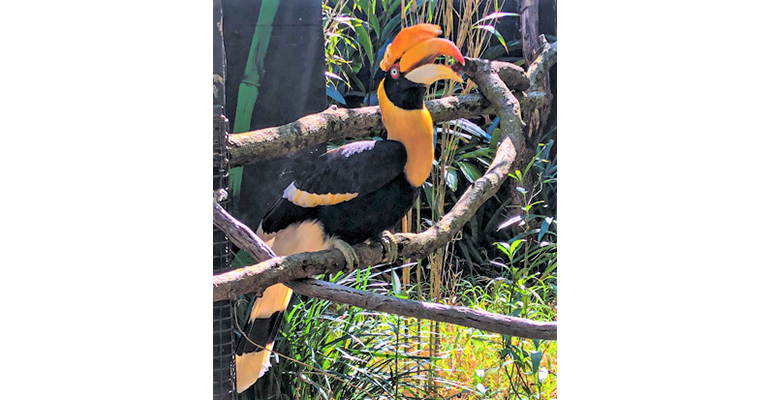 An Indian hornbill at ZooTampa in Florida had developed a potentially fatal tumor. 3D printing came to the rescue.

If you still think that 3D printing is for the birds — a sliver of a minority opinion at this point — this time you’re not entirely wrong. ZooTampa in Florida announced today the successful outcome of a first-of-its-kind restorative surgery on Crescent, an Indian hornbill that had developed a life-threatening tumor. 3D printing technology and support from Formlabs was instrumental in planning the delicate procedure and fabricating a prosthetic device that enabled a full recovery.

Crescent had contracted a form of skin cancer, which is common in humans but usually deadly in hornbills, according to ZooTampa. Removing the tumor entailed a challenge, as it was located under her casque without which her sinuses would be exposed. Medical experts at the University of Florida (USF) used 3D-printing technology from Formlabs both to print a pre-operative surgical guide and a prosthetic casque.

In preparing for the surgery, the USF radiology team used CT scans to 3D print a surgical guide for the procedure. Surgical guides have been one of the killer applications, if you’ll pardon the expression, in medical 3D printing. They enable accurate, personalized modeling of the patient’s anatomy much faster than conventional methods, and are increasingly used in hospitals around the world. Without the pre-surgical planning and 3D-printed guides, the surgery would have been “much more challenging,” said surgeon Dr. Alexander Fox-Alvarez, who was assisted by Dr. Kaitlyn McNamara, D.V.M, and UF senior surgical resident.

An appropriate biocompatible material was needed to print the prosthetic, which had to be lightweight, hard, and durable. USF Health reached out to Formlabs for advice, and the company donated a then-new material in development that had the requisite properties — BioMed White resin.

The resin was shown for the first time, along with BioMed Black, at the 2021 Radiological Society of North America conference in November 2021. At the time, Formlabs said the addition of the resins to its materials library would allow for greater flexibility in design and function and could be used in a variety of applications ranging from medical devices to consumer goods.

After removing the tumor, the surgeons adhered the 3D-printed casque to Crescent's beak with a dental acrylic. She is doing well, they reported, with no change in behavior, appetite, or vocalizations. An unexpected benefit came when Crescent began preening within hours after surgery: The resin happened to be compatible with the yellow preening oils secreted from the glands above her tail, giving the new casque the same bright glow as her original one, said ZooTampa.

Although Crescent has achieved some measure of fame in the hornbill kingdom because of the novel procedure, she is not likely to eclipse her famous cousin, the smaller Red-billed hornbill, which was the model for Zazu in the Lion King.