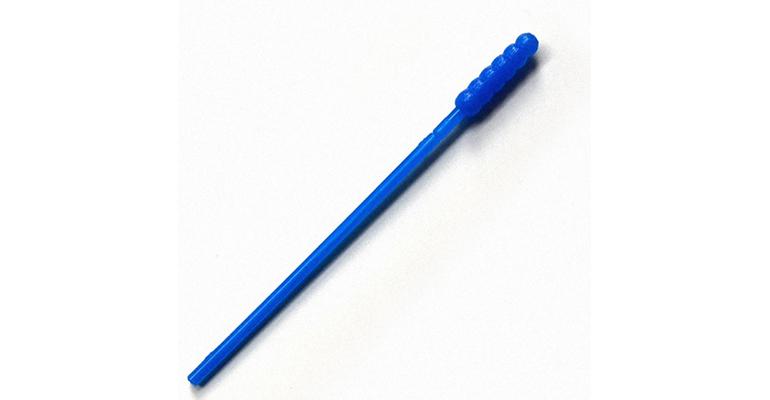 It’s safe to say that few people gave much thought to nasal swab design and manufacture until COVID-19 came to town. As we lined up for tests, though, suddenly everyone had an opinion about the long-stemmed scrapers. There were questions about efficacy, and discomfort was a common complaint. Oh, and there were worries that a shortage of swabs might be on the horizon. A couple of recent innovations have helped to allay those concerns.

Today, Technimark announced that it has partnered with Rhinostics and iMFLUX to produce, package, and distribute individually packaged nasal swabs to help detect and diagnose potential infections such as COVID-19. Production of the medical-grade polypropylene swabs began in April at Technimark’s headquarters in Asheboro, NC, where the swabs are injection molded and packaged in an ISO Class 8 cleanroom and sterilized prior to distribution.

Technimark specializes in precision injection molding, assembly, and full supply-chain services for the healthcare and other markets at facilities in the United States, Mexico, United Kingdom, Ireland, Germany and China.

Rhinostics is a Boston-based startup founded last year with the goal of “revolutionizing sample collection” and optimizing the time and labor involved in analyzing samples in laboratories.

The injection-molded polypropylene nasal swab was developed by P&G and iMFLUX, a subsidiary of P&G that offers low-constant-pressure injection molding software invented by P&G. Rhinostics has the license to bring the swab to the clinical laboratory market. The novel swab allows for easy collection from the front of the nose, reducing patient discomfort, and reportedly absorbs up to a 30-fold increase in sample concentration compared with conventional swabs.

“We are proud to partner with Technimark, iMFLUX, and P&G to bring new collection devices like the P&G nasal swab to clinical laboratory workflow,” said Rhinostics CEO Cheri Walker. “Not only does the nasal swab production help to relieve supply-chain bottlenecks, the new design and polypropylene material allow for comfortable collection and sample concentration due to dry shipment and improved release of viral particles.”

Rhinostics plans to register the P&G polypropylene nasal swab as a Class I exempt medical device and will pursue Emergency Use Authorization for home collection with RT-PCR testing, the gold standard for detection of SARS-CoV-2 infection.

Meanwhile, informed by almost seven years of 3D printing research at MIT’s Media Lab, Jifei Ou, PhD, developed a new type of nasal swab for COVID-19 testing. Since March 2020, he has been working with hospitals to improve the design of swabs by applying thin, hair-like structures that Ou developed while at MIT. Tiny woven lattices within the swabs allow them to absorb and release more fluid than conventional swabs, said the release on the MIT website.

Ou’s spinout company, OPT Industries, uses a continuous manufacturing approach that allows it to scale up 3D-printer production to meet demand. To date, it has supplied more than 800,000 swabs to healthcare and at-home testing organizations, helping to meet a shortage that had threatened hospitals’ testing capacity.

While working toward his PhD, Ou created new ways to design and 3D print intricate microstructures, which required his team at MIT’s Media Lab to build its own 3D printer, create design software, and develop special polymers to meet durability and resolution requirements. That expertise was put to the test when Ramy Arnaout of Beth Israel's clinical microbiology laboratories broadcast a general request for help to prevent a possible shortage of nasal swabs.

The day after seeing the e-mail from Arnaout, who is also an associate professor at Harvard Medical School, Ou walked into his office at Beth Israel with a prototype nasal swab his team had put together overnight. The visit was notable not only for the quick turnaround, but also for the precision with which the prototype was made, reported Zach Winn from the MIT News Office.

OPT’s products are designed using algorithms that attempt to optimize each fiber placement. The company’s swabs feature porous microstructures within their heads that are tuned to collect and retain fluid, then quickly release that fluid when it enters a test vial.

“When it came to the swabs, we thought, ‘Hey, that’s a great fit!’” Ou recalls. “Swabs need to be soft, flexible, the structures on the tip need to be very intricate. That’s what we do,” he told Winn.

OPT’s additive manufacturing system can produce the company’s hair-like microstructures in a highly automated way that allows OPT to compete on price with traditional swab makers. The company currently is able to produce 80,000 swabs a day in its facility, and Ou says OPT is building newer versions of its machines that can produce products even more quickly.

The startup is also developing other medical sampling devices that use its high bacterial collection rate to test for other diseases, reported Winn. This month, OPT is moving into a new office in Medford, MA, that will bring together its lab and production teams. Ou told MIT News that the goal is to speed up the cycle from product ideation to design, prototype, optimization, and production.

“We’re trying to be like 3M in additive manufacturing,” Ou told Winn. “Everyone knows 3M because they have a lot of different products that are essential to daily life. That’s the model we’re going after. We have other medical and cosmetic products under development — the swab is just the beginning.”