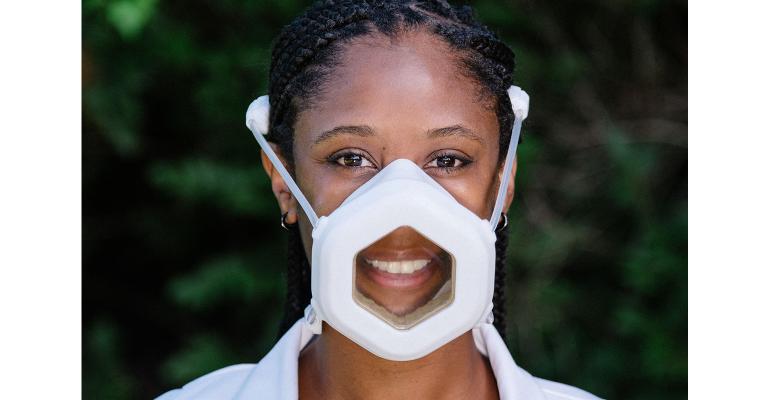 Canopy is a reusable, transparent respirator designed to address the shortcomings of N95 disposable devices.
The transparent, chemically resistant material is a key component of the Splashblocker shield and Canopy respirator.

A transparent shield that protects healthcare personnel and patients from pathogens released when toilets are flushed and the filter cartridge of a newly designed respirator have one thing in common — they both incorporate parts made from Eastman’s Tritan copolyester. The material’s transparency and chemical resistance were among the key properties that favored its selection.

Invented by an oncology nurse, the Splashblocker protects medical personnel and patients from exposure to toilet plume aerosol. Pathogens and harmful chemicals such as chemotherapeutics and antineoplastics are routinely encountered in healthcare settings when toilets are flushed. Tritan's cleanability and chemical resistance to more than 30 commonly used disinfectants was key to its selection by Splashblocker, said Eastman in its news release. “Their expertise in manufacturing has been extremely helpful in the incorporation of injection molding to make the Splashblocker," added Brian P. Crawford, co-founder and CEO.

Splashblocker has now been involved in two very positive user-experience trials, according to Eastman, with the most recent documented in a 2020 white paper with Premier Applied Sciences. Bioaerosols produced by toilet flushing “is an under-recognized infection prevention and control issue, rapidly gaining attention and focus,” said Crawford. ”We are excited to have just received a Technology Breakthrough Agreement from Premier Inc. as a technology that reduces these exposures,” added Crawford.

Canopy is a reusable, transparent respirator designed to address the shortcomings of N95 disposable devices. It is the flagship product of the startup led by alumni of Google, Johns Hopkins, dialysis services provider DaVita, and Boston Scientific. Tritan enters the picture via the Canopy filter cartridge.

Tritan enables the Canopy filter cartridge to be fully transparent, allowing for a crystal-clear front lens that provides a window into the user's facial expressions and emotions. Tritan also protects the filter core itself from wear and tear. During its mold-building process, Canopy worked closely with the Eastman technical team.

"The requirements for the resin used in this component were very specific," said Joe Rosenberg, founder and CEO of Canopy. "We were seeking a durable, chemically resistant and water-clear material. Finding a thermoplastic that was relatively inexpensive and met all those requirements proved challenging. Tritan strikes the balance beautifully."

Seeking input from critical stakeholders in the healthcare industry played a key role in the design and development of both the Splashblocker and Canopy, added Eastman. Likewise, Eastman relies on input and collaboration across the value chain in the development of its medical-grade polymers, said the company.

"Healthcare providers must focus on reducing infections, and a key to that is the cleanability of products," said Eastman’s Brad Potter. "In developing our medical-grade polymers, we listened to healthcare industry professionals. They need material that stands up to the most commonly used disinfectants in healthcare environments and won't crack or craze. With Tritan, manufacturers can bring medical devices to market approved for an exhaustive list of cleaners and with the testing to demonstrate their devices are made to last."