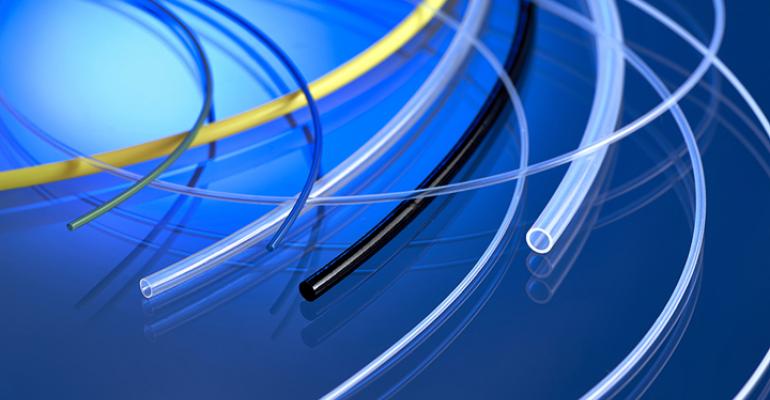 Raumedic (Helmbrechts, Germany) has successfully extruded Moldflon PTFE for its medical customers since 2012, when it reached an agreement with material developer ElringKlinger Kunststofftechnik (Bietigheim-Bissingen, Germany) for cleanroom extrusion rights. The material has found favor with medical manufacturers because it offers significant benefits for continuous extrusion of tubing over conventional PTFE.

Raumedic (Helmbrechts, Germany) has successfully extruded Moldflon PTFE for its medical customers since 2012, when it reached an agreement with material developer ElringKlinger Kunststofftechnik (Bietigheim-Bissingen, Germany) for cleanroom extrusion rights. The material has found favor with medical manufacturers because it offers significant benefits for continuous extrusion of tubing over conventional PTFE. Raumedic has just announced that it has further developed Moldflon cleanroom extrusion for a range of medical device applications and that it has conducted testing to demonstrate the material's benefits in secondary thermoforming operations, such as tipping and flaring. The company will showcase its latest capabilities at MD&M East in New York City next month.

Moldflon is a biocompatible thermoplastic with similar physical properties to traditional PTFE in terms of melting point, continuous service temperature, coefficient of friction, tensile strength and dielectric constant. The outer diameters of Moldflon PTFE liners can be etched chemically with sodium napthalene or with plasma activation, which is an environment- and workplace-friendly technology.

Unlike traditional PTFE that is processed via batch ram extrusion, Moldflon is processed continuously on a single-screw melt extruder. This is highly advantageous for long, continuous PTFE tubing production runs and for PTFE with co-extruded radiopaque stripes, says Raumedic. 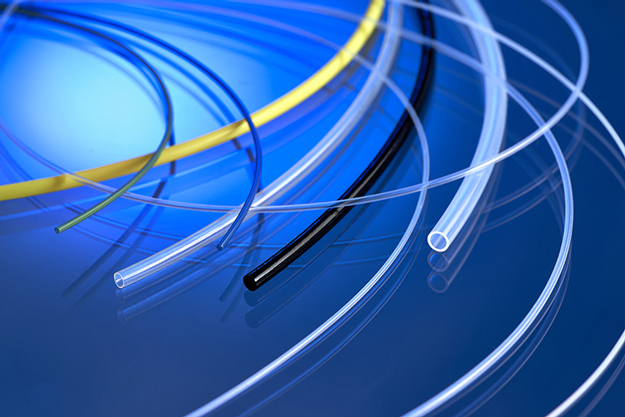 A notable development with this material are applications involving lubricous inner catheter liners and the insulation of fine wires for electrical stimulation devices, according to Steve Maxson, Technical Sales Manager at Raumedic. Moldflon can be extruded at extremely low volumes on a micro extruder over a silver-plated copper or stainless-steel mandrel for catheter liners with a wall thickness down to 0.0005 in. (0.013 mm). Additional applications include single-lumen tubing with wall thicknesses down to 0.001 in. (0.025 mm), multi-lumen tubing, IV catheter tubing with co-extruded encapsulated radiopaque stripes, micro cannulae for insulin delivery and spooled beading (rod) used for lumen support.

In addition to the extrusion benefits, Moldflon is said to provide significant advantages in secondary thermoforming operations. Traditional PTFE is prone to poor post processing, such as tipping and flaring, with long cycle times. Tests conducted by some of the leading thermoforming companies in the medical industry reportedly have shown that thin-walled, tapered tips made from Moldflon won't split, crack or flake, as may be the case with traditional PTFE. For Robert Winters, President of Cath-Tip, the outcome using Moldflon "is tremendously better than traditional PTFE," while Joe Bolinger, Sales Engineering Account Executive for Vante, gives high marks to Moldflon PTFE's flow characteristics, which were "observed at lower temperatures while requiring shorter process characterization time, as compared to other PTFE materials."

Earlier this year, Raumedic announced that it would establish its first manufacturing plant outside of Germany in Mills River, NC. See the article, "Raumedic brings German plastics expertise to 'largest, most innovative medical market in the world,'" for more about the company's expansion into the U.S. market.