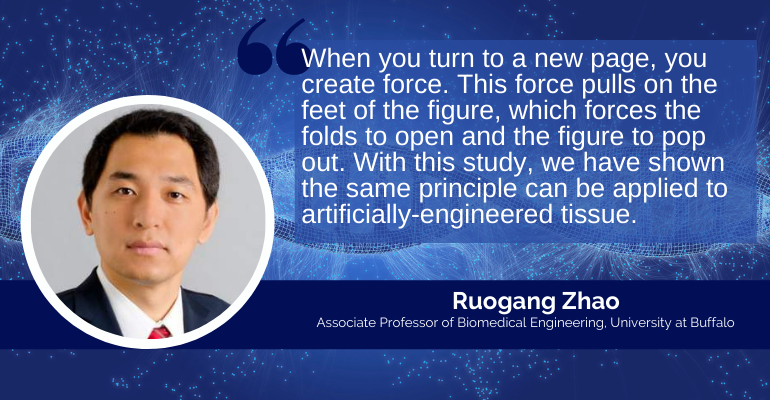 Described in Advanced Science, the method is based upon compressive buckling – the structural engineering principle that explains why figures project outward from the pages of children’s pop-up books.

In a series of experiments, researchers used the compressive buckling method to fabricate a variety of three-dimensional polymeric structures. These include simple shapes, such as a box and a pyramid, as well as more complex demonstrations, such as a sound wave and an eight-legged design that resembles an octopus.

To showcase the method’s utility for tissue engineering, the team created an osteon-like structure. Osteon is the basic building unit of bone tissue and is characterized by osteocytes sparsely distributed in a mineral bone scaffold. Each osteocyte rests in a small cavity, known as lacunae, and different osteocytes are connected through canaliculi, which are small channels in the bone scaffold.

Image courtesy of University at Buffalo 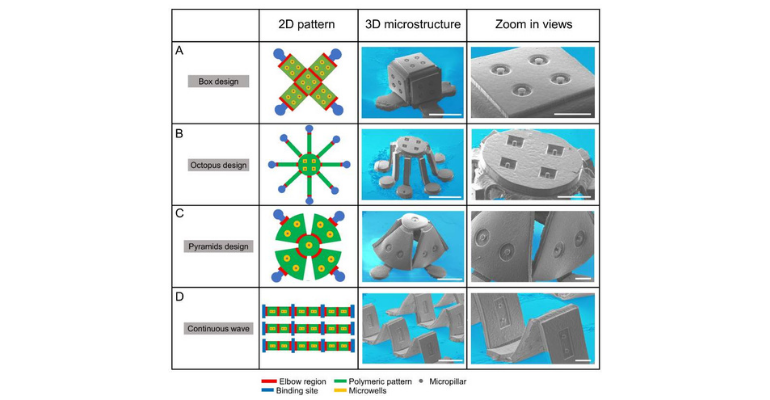 The results are important, said Ruogang Zhao, PhD, associate professor of biomedical engineering at University at Buffalo, because most tissue engineers rely on two-dimensional tissue fabrication methods to create very thin artificial tissue that do not represent the volume of the human tissue. The planar nature of these artificial tissue models limits their application in disease modeling and drug testing, he said.

"When you turn to a new page, you create force. This force pulls on the feet of the figure, which forces the folds to open and the figure to pop out,” said Zhao, who is a co-corresponding author of the study. "With this study, we have shown the same principle can be applied to artificially engineered tissue."

The compressive buckling method can be used to rapidly transform a two-dimensional artificial tissue to a three-dimensional artificial tissue with substantial thickness, thus allowing researchers to create more realistic tissue and opening new possibilities in tissue engineering and regenerative medicine. It also has the potential to outperform other methods of 3D tissue engineering, such as 3D bioprinting, in terms of the fabrication speed and spatial resolution, Zhao said.

Click here for additional information about this research, including other co-authors on the paper.