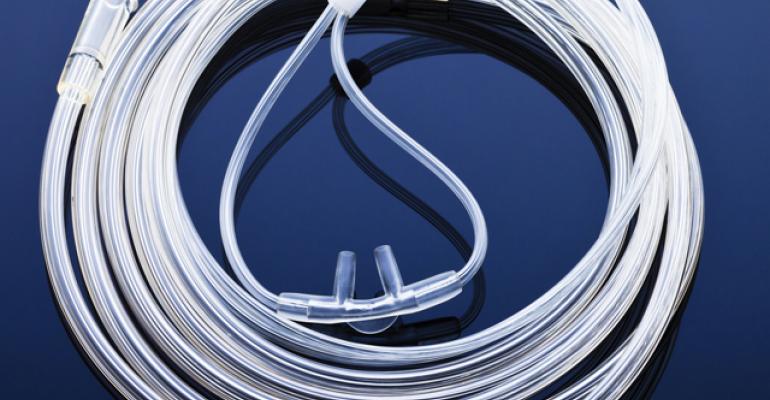 When I interviewed Peter Galland from Teknor Apex (Pawtucket, RI) last month for an article on the PVC-free debate and the company's plans for NPE2015, he mentioned a project the company had been working on that involves replacing polycarbonate (PC) with a rigid PVC in a medical connector application.

When I interviewed Peter Galland from Teknor Apex (Pawtucket, RI) last month for an article on the PVC-free debate and the company's plans for NPE2015, he mentioned a project the company had been working on that involves replacing polycarbonate (PC) with a rigid PVC in a medical connector application. "We currently are gathering data on this, so I'm not sure that we will be ready to talk about it at MD&M West or even at NPE2015 in March," said Galland, who is Industry Manager, Medical and Other Regulated Compounds, in the compounder's vinyl division. Well, somebody's been burning the midnight oil over at Teknor Apex: a press release came through yesterday announcing that the technology would be introduced at next week's MD&M West exhibition and conference in Anaheim, CA.

"PC is prone to cracking, or crazing, caused by the migration of plasticizer when it comes in contact with flexible PVC parts," Galland told PlasticsToday. The rigid PVC developed by Teknor Apex reportedly can replace PC in clear medical components such as connectors and check valves, achieving comparable strength and clarity while reducing or eliminating the stress cracking that often occurs in PC at the interface with flexible PVC components such as tubing.

Teknor Apex has compiled data based on extensive testing showing that it took the new Apex SCR rigid PVC grades one to two and one-half weeks or longer to exhibit stress cracking after prolonged contact with flexible PVC. Test samples consisting of conventional rigid PVC or a PC widely used in medical devices cracked within a matter of hours, reports the company.

Apex SCR rigid PVC compounds meet biocompatibility standards such as ISO 10993-1 and USP Class VI; can be sterilized by EtO and heat methods; have good heat stability; and are easy to process. The material offers a cost savings compared with resins that may be over-engineered for the application, according to Teknor Apex.

Stress cracking, or crazing, occurs when amorphous polymers such as PC or conventional rigid PVC come into contact with plasticizers used to impart flexibility. PC, in particular, is even more susceptible to stress cracking under these conditions than standard PVC, and it is possible for PC components to become so riddled with cracks that the ultimate result is catastrophic part failure. Until now the device industry has attempted to slow or stop stress cracking by focusing on the plasticizer formulation used in the flexible component, but this method has had limited success, says Teknor Apex.

To learn more about this technology, stop by booth 2532 at MD&M West.

The nation's largest medical manufacturing exhibition and conference, MD&M West is co-located with PLASTEC West at the Anaheim Convention Center in Anaheim, CA, from Feb. 10 to 12.