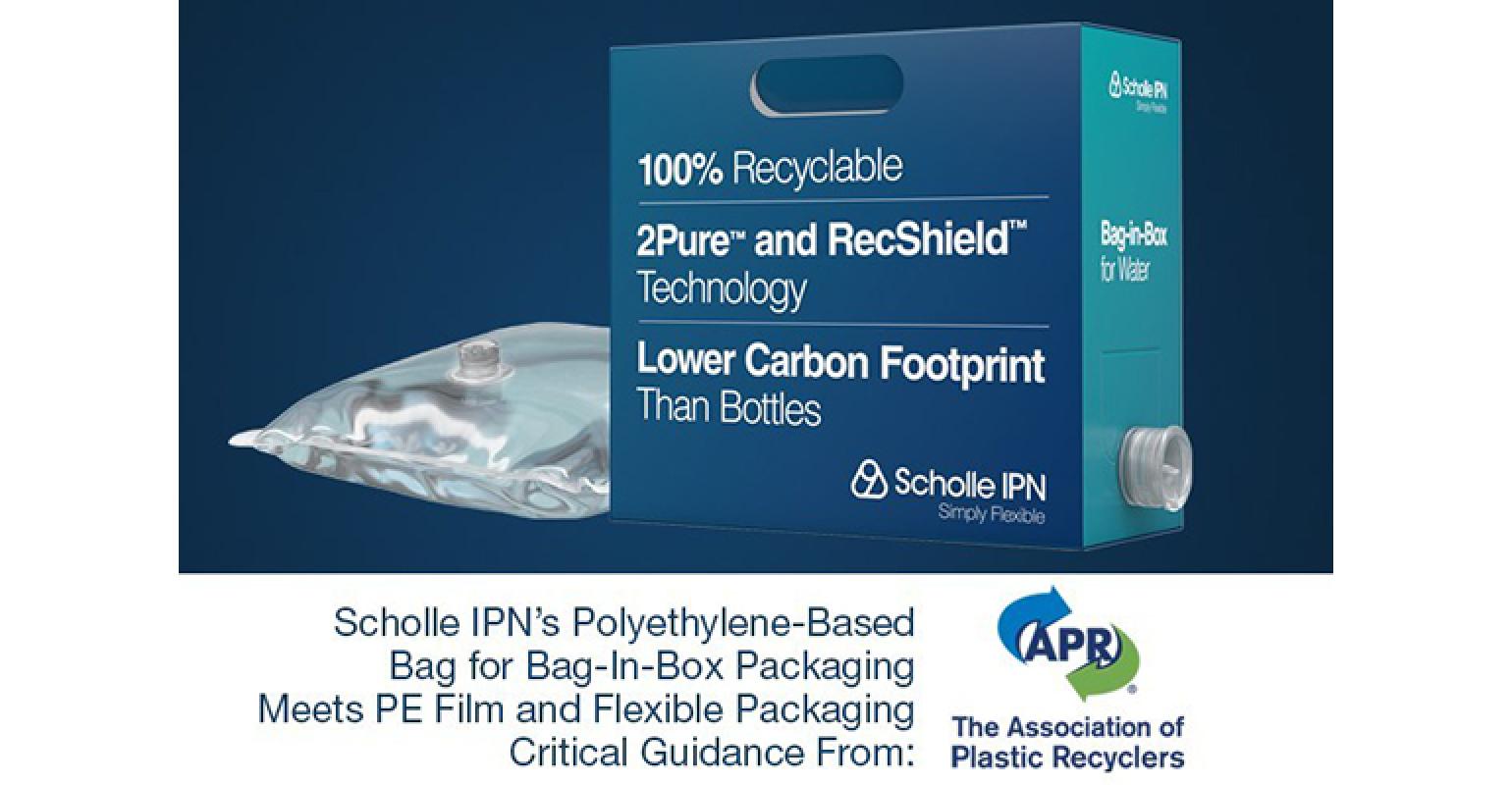 Scholle IPN's new BIB format reduces plastics use by up to 80% per liter of water and has up to 63% less greenhouse gas emissions in production when compared to traditional water bottles. The new offering features a recycle-ready, all-polyethylene structure (including bag film, spout, and dispensing tap) and can be produced in sizes ranging from 2-liters to 23-liters for retail or home-office delivery markets.

PFE tested a bag made with two layers of film and a polyethylene closure. The outer layer, made of Scholle IPN's RecShield, is a barrier film specifically designed to keep unwanted flavors from migrating through the film into the water. The inner layer consists of Scholle IPN's proprietary 2Purefilm technology that contains scavenging technology that protects the taste of the packaged water.

Teresa Bernal-Lara, Ph.D., Film Development Manager for Scholle IPN, said of the recyclability testing protocols, "A new film technology cannot simply be put out in the world and touted as recyclable—it must go through testing to be recognized as such. “The testing performed by PFE compared an all-polyethylene film and closure to Scholle IPN's innovative RecShield and 2Pure option along with a polyethylene spout and tap. “The samples were reduced to flakes which were then extruded into pellets and successfully re-blown into film that can be used to produce new flexible packaging, a truly circular solution. Scholle IPN's water packaging performed beyond the minimum threshold for compliance set forth in APR's Critical Guidance Protocol for PE Film and Flexible Packaging (FPE-CG-01) and we have received a letter of recognition from APR for this achievement."

"Delivering liquid products in the best, most efficient way possible is what Scholle IPN does," stated David Bellmore, director of global film and package development for Scholle IPN. "Our bag-in-box bag and tap make up less than 5% of the overall package weight—with corrugate making up the balance. According to the EPA, corrugate packaging is recycled at a 96.5% rate while PET and HDPE bottles are recycled just 29% of the time. That means our package will not only offer a recycle-ready bag and tap, but around 95% of the overall package by weight is likely to be recycled. Environmentally speaking, plastic water bottles simply don't match up with bag-in-box."

Ross Bushnell, President and CEO of Scholle IPN, added "Source reduction is a powerful step in the mitigation of our carbon footprint. By reducing the amount of plastic required to get our customer's liquids to their end-market, we ensure that there is less waste throughout the product lifecycle. Our new flexible water packaging provides for recyclability where possible while also ensuring critical source reduction that saves our Earth's diminishing resources for future use."