The plastic side of mind-controlled prosthetics 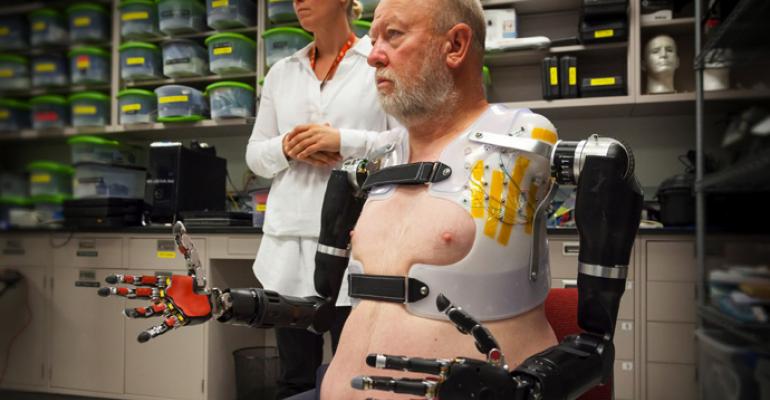 Double amputee Les Baugh of Colorado made history this past summer, when he became the first man to wear and simultaneously control prosthetic limbs simply through thought.

Double amputee Les Baugh of Colorado made history this past summer, when he became the first man to wear and simultaneously control prosthetic limbs simply through thought. Baugh lost both arms in an electrical accident 40 years ago, and thanks to Modular Prosthetic Limbs (MPL) developed at the Johns Hopkins University Applied Physics Laboratory (APL; Laurel, MD) and a surgical procedure called reinnervation, he was able to perform a set of manual tasks for the first time in four decades. Plastic components had a hand in making this happen, but we'll get to that in a moment. 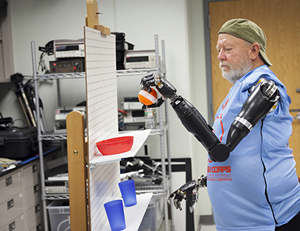 Development of the MPL is part of the Revolutionizing Prosthetics program led by APL overseeing an interdisciplinary team of researchers, government agencies, and private firms to develop neurally controlled artificial limbs. The project is funded by the Defense Advanced Research Projects Agency (DARPA). Baugh participated in the research effort in June to further assess the usability of the MPL. The results exceeded expectations, according to APL.

Before he could be armed with the prosthetics, Baugh had to undergo a targeted muscle reinnveration procedure at Johns Hopkins Hospital. "It's a relatively new surgical procedure that reassigns nerves that once controlled the arm and the hand," explains Johns Hopkins Trauma Surgeon Albert Chi, MD. "By reassigning existing nerves, we can make it possible for people who have had upper-arm amputations to control their prosthetic devices by merely thinking about the action they want to perform."

After recovery, Baugh was trained on the use of the MPLs at the lab. First, he worked with researchers on a pattern recognition system that involved identifying individual muscles, noting their contraction and communication with each other along with their amplitude and frequency. That data was translated into actual prosthetic movements.

Baugh was then fitted with a custom socket that supports the artificial limbs and establishes the neurological connections that convert thought into movement. Following simulation training using a Virtual Integration Environment, Baugh was ready to get started. He moved several objects using the MPLs, with some tasks requiring coordination of eight separate motions.

"We expected him to exceed performance compared to what he might achieve with conventional systems, but the speed with which he learned motions and the number of motions he was able to control in such a short period of time was far beyond expectation," said APL's Courtney Moran, a prosthetist working with Baugh. "What really was amazing, and was another major milestone with MPL control, was his ability to control a combination of motions across both arms at the same time. This was a first for simultaneous bimanual control."

This technology is jaw-dropping amazing, and we had to wonder what role plastics might have played in the MPL design. HDT Robotics (Solon, OH), a subcontractor on the Revolutionizing Prosthetics program, graciously shared some insights with PlasticsToday.

"We use plain bearings made from Iglide formulations proprietary to Igus in many of the gearboxes or joints of the limb," explains Eric L. Faulring, PhD, Manager of Electro-Mechanical Systems at HDT. "These [bearings] are considerably lighter and smaller than conventional rolling element bearings but have the same load capacity," says Faulring. Friction, wear, thermal expansion, oil/moisture adsorption, and maximum permissible pressure were critical drivers in material selection for this project, he adds, and machinability of the plastic bearings to allow tight integration into complex assemblies was also a deciding factor.

PEEK and acetal are the materials of choice in spacers, sensor mounts, wire guides, and related components because of their lightweighting profiles. "PEEK is used for the high-temperature and high-strength applications," adds Faulring.
For the soft surfaces on the hands, HDT Robotics makes extensive use of two-part castable polyurethanes. "We embed tactile sensors into an overmold of polyurethane bonded to the underlying metallic structure of the fingers, thumb, and palm," explains Faulring.

Not surprisingly, additive manufacturing technology is used where it does not make financial sense to invest in molds or tooling. "We make production parts for some complex nonmachinable structures in larger dimensions, from 15 to 150 mm long, using selective laser sintering and nylon 12 PA or related formulations" says Faulring.

While material selection is not the sexiest part of this technology—we are talking about mind-controlled prosthetics, after all—we couldn't ignore the role that plastics play in making it work.

That's probably neither here nor there for Baugh, who understandably has more momentous things on his mind. In particular, he's looking forward to the day when he can take the MPLs home. "Maybe for once I'll be able to put change in the pop machine and get pop out of it," he told the folks at APL. He's looking forward to doing "simple things that most people don't think of. And it's re-available to me."