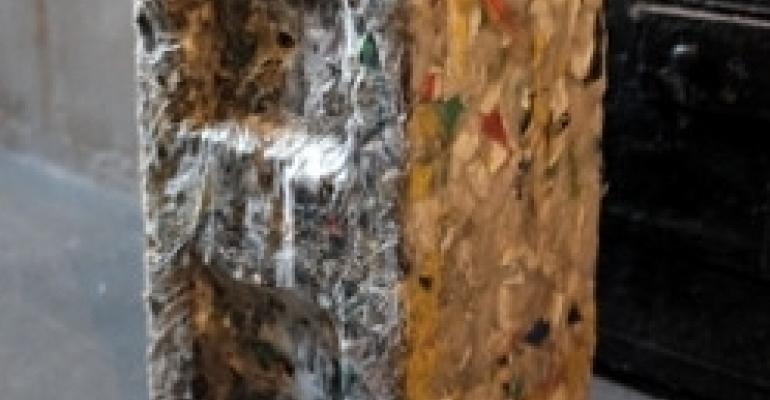 It’s not the first time that an entrepreneur has developed a way to use plastic as building blocks—and we’re not talking Lego here. No, these are real building blocks modeled in the size and dimensions of common concrete building blocks that can be used for commercial and residential building projects. The only difference is they are made from comingled scrap plastic.

Using a 100% modular manufacturing system, ByFusion (Brooklyn, NY) takes in scrap plastic from the world’s oceans, where some studies estimate that 4.8 million metric tons of plastic gets dumped each year, and puts it through a machine that compacts the comingled scrap into 8 x 16 x 4 inch building blocks, called RePlast.

The company also will take scrap plastic from coastal communities as well as landfills. ByFusion noted that globally about 32 million tons of plastics are generated each year, of which only 8% gets recycled. ByFusion will “upcycle” that material for various building applications. In the United States, RePlast is a fit-for-purpose material that can be manufactured in various densities and weights to make non-inhabited structures such as sound barriers, warehouses, rest areas and roadway projects. Outside the United States, RePlast can be used to build single-story houses and other inhabited structures.

The RePlast blocks can be made in density weights from eight to 27 lbs. and have a fire rating similar to the Trex decking materials.

Currently, ByFusion is trying to raise funds on Indiegogo, with a goal of $250,000. At the time of writing, the company had raised $30,649. The funds will be used to complete its first project with Sustainable Coastlines Hawaii (SCH), an organization whose mission is to inspire local communities to care for their coastlines through hands-on-beach cleanups.

“We realized that in order to start making a difference for our planet or environment, we needed to act now,” said Gregor Gomory, CEO of ByFusion. “Every year millions of tons of plastic end up in the ocean. We have the technology to process it in an environmentally sensitive way and put it to use in local communities. When we spoke with SCH and learned about what was happening in the protected area, we realized that we could contribute a viable way to process the plastic collecting on the islands and reef systems. This area is much too important to write off as a victim of our broken waste management system—the plastic has got to be contained.”

The machine to make RePlast blocks is mobile and can be hauled on a flatbed truck and set up in the communities that need the system. That saves the cost of shipping the scrap plastic to a re-processing facility.

The funds collected on Indiegogo will also go toward completing the required U.S. testing in order to get RePlast listed as an approved building material. The company also needs to upgrade its current pilot machine to increase the amount of plastic that can be processed from the current 7,000 blocks per day to 10,000.

The company also needs to expand its manufacturing capabilities to be able to produce more ByFusion machines, which can run on propane gas or electricity. The first commercial ByFusion machine is expected to be completed by May 2017.

A video showing the process can be viewed on the ByFusion website.