Market overview: The spot resin markets were relatively quiet last week, according to spot-trading platform, The Plastics Exchange (TPE), with minimal fresh offers and firming prices. Polyethylene (PE) maintained its strength and edged slightly higher, while polypropylene (PP) also inched up $0.005/lb, as the widespec market continued to close the discount to prime.

Market overview: The spot resin markets were relatively quiet last week, according to spot-trading platform, The Plastics Exchange (TPE), with minimal fresh offers and firming prices. Polyethylene (PE) maintained its strength and edged slightly higher, while polypropylene (PP) also inched up $0.005/lb, as the widespec market continued to close the discount to prime. TPE CEO Michael Greenberg noted that as the mid-month mark for November approached, it seemed that October's $0.04/lb PE price increase, which was not fully implemented, will be tacked on to the balance of contracts in November. Only two weeks ago, there was talk that PP contracts would go as much as $0.03-$0.05/lb lower, but it now seems they will settle down only $0.01/lb, tracking polymer-grade propylene (PGP) monomer. Export demand is increasing, with higher interest for PE and PP seen from South America and Asia. 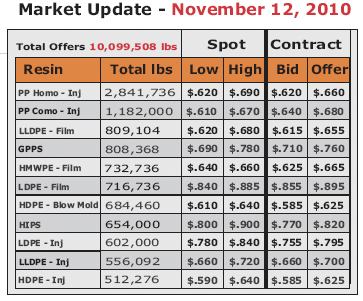 Ethylene's spot market remained active, with numerous transactions seen at the start of last week. Prices continued higher with monomer for November delivery transacting as high as $0.535/lb, up another couple cents. Although some crackers have come back on stream, short-term supply restrictions remain. Tight conditions are expected to ease over time, with ethylene for delivery in the first quarter of 2011 trading at $0.43/lb-a full $0.10/lb discount to current pricing. Ethylene's net-transaction price (NTP) for October was up $0.0375/lb to $0.4275/lb.

Polyethylene (PE) spot prices added another $0.005/lb last week, building on the previous week's $0.03/lb increase. Supplies are tight with few fresh PE offers making it to the secondary market. Distributors and resellers have seen their typical flow of resin diminished, making it easier to place the limited number of discretionary railcars made available. Demand has eased as the price has risen, but those in need of quick material are paying a premium. Supported by the run-up in spot ethylene prices, PE producers should see industry-wide acceptance of the October $0.04/lb price increase during November, with another $0.05/lb increase nominated for December.

Preliminary data released by the American Chemistry Council (ACC) show that October domestic PE sales fell 80 million lb from September to 2.37 billion lb, slightly below the trailing 12-month average. Exports were a robust 675 million lb, accounting for more than 22% of total PE sales, and operating rates jumped to over 94%. Out of synch with the market, this resulted in an inventory build of 140 million lb, leaving 3.08 billion lb of PE on hand to start November.

Propylene's spot market moved higher with several transactions reported. Refinery grade propylene (RGP) traded up to $0.4825/lb, adding $0.0175/lb for the week. Polymer-grade propylene (PGP) traded a half-cent higher to $0.555/lb, bringing the RGP-PGP spread in to $0.0725/lb. November PGP contracts have initially settled $0.01/lb lower to $0.575/lb. Some had expected a larger drop, but recent strength in the entire chain seems to have lent support to the contract price negotiation.

Polypropylene (PP) spot prices posted their first weekly gain in two months, although it was only $0.005/lb. The market, anticipating a sizable drop in November PGP contracts, became oversold at the end of October, with offgrade prices dropping in to the low $0.50s/lb and in some cases generic prime delivered to Houston into the high $0.50s/lb. The low-end of the market began to snap back when the monomer market firmed, and now generic prime PP homopolymer railcars have climbed back into the mid-$0.60s/lb.

According to preliminary ACC data, domestic PP demand in October fell by 60 million lb to just 1.226 billion lb, about 8% lower than 2010's average. PP exports, however, have picked up, with 148 million lb sold offshore, some 60 million lb more than September. PP producers throttled back their reactors to 87% in October, but still built about 60 million lb of inventory, entering November with 1.654 billion lb on hand. Greenberg noted that rising feedstock costs have buoyed the commodity resin markets during the first half of November.

Greenberg anticipates that PE contracts should ultimately find themselves $0.09/lb higher than the summer's low with a $0.05/lb increase on the table for December. PP contracts have been up and down in recent months, but November should finish flat compared to August. "Overall, the spot resins markets are tightly supplied and there is an underlying bid from the export market. Demand however, is coming into question as processors begin to position for their year-end inventory levels."