Spot commodity grade polyethylene (PE) and polypropylene (PP) prices continue to slip, shedding from a half-cent to a penny last week. Spot-trading platform, The Plastics Exchange, noted the move reflected a good end to the month, with TPE CEO, Michael Greenberg saying that in the wake of plunging energy and feedstock costs, suppliers were "generally willing to sell spot resin at prices necessary to enable transactions." Most deals were for as-needed volumes, but TPE also heard of some larger transactions at sharp discounts, helping chip away at bulging upstream inventories. Resin buyers are benefiting from the market's weakness, as PE contracts settled down $0.07/lb in May, while PP contracts were down $0.10/lb. TPE expects further price relief for both materials in June. 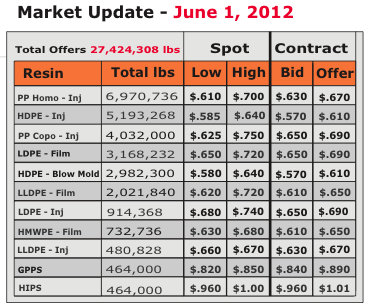 Energy prices dropped sharply in volatile and active trading, with July crude oil futures down for the fifth week in a row, losing a hefty $7.63/bbl to settle at $83.23/bbl on Friday, a level not seen since October. July natural gas continued to slide, dropping $0.301/mmBtu, more than 11%, to end the week at $2.326/mmBtu. The crude oil: natural gas price ratio expanded modestly to 35.7:1.

Ethylene spot prices plunged in very active trading, as the market gave way mid-week, dropping about a nickel on Wednesday alone, when ethylene for June delivery traded down to $0.475/lb and was subsequently offered even lower. The market sold off another nickel to $0.42/lb, for a weekly loss of about a dime. Ethylene for delivery during the third quarter was priced around $0.40/lb. Ethane prices also collapsed, giving up about 25% of their value, closing the week at $0.295/gal ($0.125/lb).

Polyethylene (PE) prices continued to unravel, with penny losses widely seen last week. TPE also saw some month-end specials for multiple railcars with a larger discount. Producers yielded to pressure to reduce May contracts in excess of the $0.04/lb offered, with most agreeing to lower contracts by $0.07/lb. "With (spot) ethylene costs cratering, upstream resin inventories bulging and negative sentiment abounding, it is expected that June contracts will also be marked lower," Greenberg said. Processors are looking to wipe away at least the balance of the $0.11/lb of increases that were implemented December-March and perhaps achieve more than just the remaining $0.04/lb. Export markets remain weak, falling energy and feedstock costs around the world have market participants de-stocking and those that need resin, are purchasing from nearby locations to reduce the price risk during transit, according to TPE.

Propylene's short-term recovery into the mid $0.50s/lb ended abruptly. Better output from refineries coupled with crackers now also utilizing propane as a feedstock, has increased propylene supplies. Further, weak polypropylene demand has likely resulted in reduced operating rates and less need for propylene monomer. Falling gasoline prices and alkylation values have also lowered the support price from this alternative demand. By the end of the week, sellers were offering their polymer grade propylene (PGP) as low as $0.515/lb, with the best buyers still several cents away. Although June PGP contracts have been nominated to decrease $0.08/lb from the May price of $0.675/lb, spot activity indicates that a larger decrease is warranted. A couple spot transactions were already concluded at the eventual June settlement price minus $0.03/lb. RGP was shown in the mid $0.40s/lb.

Polypropylene (PP) spot prices shed another cent ending the month $0.09/lb below where they began and $0.16/lb lower than the March peak. PP contracts ran up $0.215/lb during the first quarter, giving back a dime in May and are nominated to drop $0.08/lb for June. The actual settlement, however, will likely be even lower, TPE noted. Poor resin demand during the last couple months of destocking has backed up producer inventories, which continues to weigh on the spot market. Export demand has been dismal and is not a viable outlet for high volumes of resin. The spot market is seeing some pockets of demand as discounted prices and thin processor inventories are pushing companies to enter the market and fill in supply gaps. "Although the market is headed lower, pellets still need to be melted at factories every day," Greenberg said.

Commodity resin prices ended the month on a weak tone and are poised to move still lower in June. Plummeting energy and feedstock costs are grabbing the headlines and while processors are enjoying the price break from May, they are already clamoring for more contract relief in June. Although spot demand is trickling in from buyers in need of resin, many are standing by the sidelines waiting to see how far this market can fall before stepping up to purchase. Upstream inventories are high and export markets are weak, so it would not be surprising to see producers cut resin reactor rates to limit growing supplies.