Spot resin trading activity remained a bit slow, with a below average volume of transactions completed last week as resin prices moved lower. Spot-trading platform, The Plastics Exchange, reported that this was the case in spite of good material availability, making demand disappointing and putting resin prices under pressure. Some processors, sensing pricing weakness, have limited purchases to an as-needed basis.

Spot resin trading activity remained a bit slow, with a below average volume of transactions completed last week as resin prices moved lower. Spot-trading platform, The Plastics Exchange, reported that this was the case in spite of good material availability, making demand disappointing and putting resin prices under pressure. Some processors, sensing pricing weakness, have limited purchases to an as-needed basis. Polypropylene (PP) producers secured a $0.095/lb cost-push price increase, equal to the change in May PGP contracts, while polyethylene (PE) producers are having some difficulty in implementing their current $0.05/lb increase. 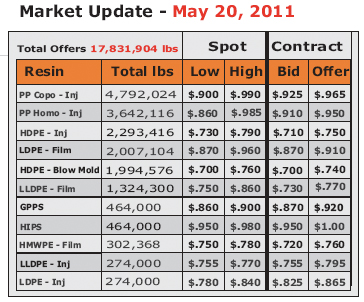 Ethylene spot prices eased some in fairly active trading. Ethylene for May delivery slipped $0.025/lb in a series of transactions with the most recent at $0.68/lb, which is a $0.04/lb premium to ethylene delivered in June. While several crackers remain shut for planned maintenance, operating rates have improved to just about 6% of total capacity now offline. Still, considering all the crackers shuttered in 2009, ethylene supplies are snug and have been so even when operating rates have been near capacity. Ethylene's net-transaction price (NTP) in April was $0.5725/lb, up $0.035/lb from March. The May NTP has yet to be declared.

Polyethylene (PE) spot prices were softer with average commodity grades slipping $0.01/lb last week. Material availability is good, particularly for packaged material out of Houston, as the flow of railcar offers has also increased. The month started strong with a moderate expectation for producers to secure their $0.05/lb price increase, but the spot market stalled and reversed, providing evidence to the difficulty in implementing this increase. The price for TPE's benchmark high-density polyethylene (HDPE) blowmolding grade has now come off $0.02/lb from early May levels. Producers remain adamant about enforcing the full increase, but it seems they might need to try again in June.

Propylene monomer remained under pressure and relatively few spot deals were consummated. Refinery grade propylene (RGP) traded several times at $0.83/lb, slicing $0.005/lb from the previous week's price. The polymer-grade propylene (PGP) market has been nearly silent. Although physical PGP did not transact in May, financially settled swaps were reportedly offered down to $0.88/lb, $0.03/lb below week-ago levels. With spot PGP indicated well below contracts, the May PGP contract price of $0.97/lb, which was up $0.095/lb from April, might very well be the high point for this cycle.

Polypropylene (PP) prices dropped $0.04/lb, retreating further from the historic highs achieved earlier in May. The spot market for generic prime PP homopolymer peaked at $1.02/lb, which was still well below the asking price for direct contracts. Contract PP prices jumped $0.095/lb in May, reaching around $1.10/lb, based on the most recent cost-push price increase. Buyers balked heavily at the increase with processors reportedly cutting actual orders well-below those forecasted for the month, enhancing spot availability at lower prices. Railcars were offered down into the lower $0.90s/lb this past week, but the market seems to have cleaned up a bit by Friday. Market participants are expecting lower PGP and PP prices in June.

The commodity resin markets were weaker with PE prices sliding a penny and PP giving back $0.04/lb. Spot PP has now erased early May gains and prices are currently lower than month ago levels. PP buyers are hoping to see the steep May contract increase reverse (at least) in June. PE buyers have resisted the May $0.05/lb increase and would call steady monthly contract prices a win. Spot resin exports to regions other than Latin America have not provided additional demand for either PE or PP. Spot domestic sales volumes have been lighter in May, but there is still a week to go.