What is an Ebola jumpsuit doing at New York Fashion Week?

One expects to see outlandish apparel at major global fashion events, but New York Fashion Week may have outdone itself, and set a new bar for Paris and Milan, when it put an Ebola jumpsuit in the spotlight.

One expects to see outlandish apparel at major global fashion events, but New York Fashion Week may have outdone itself, and set a new bar for Paris and Milan, when it put an Ebola jumpsuit in the spotlight. 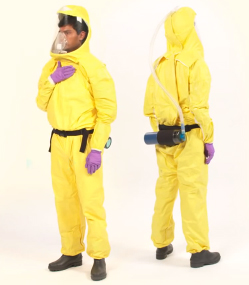 The protective suit was unveiled by wedding dress designer Jill Andrews, who is part of a team of engineers, doctors, infection control specialists and medical device designers working under the auspices of Johns Hopkins University to devise a better protective suit. And we need one.

During the height of the Ebola crisis, it became clear that current personal protective equipment left a lot to be desired: it is uncomfortable, trapping heat inside; the visor can fog up; and its poor overall design actually contributes to contaminating the people it is supposed to protect. The U.S. Agency for International Development, which led the U.S. response to the Ebola outbreak, launched a challenge in October 2014 inviting innovators from around the world to develop technologies that would help healthcare workers provide better care and contain the deadly virus. The jumpsuit designed by the team from Johns Hopkins was chosen as one of three winners in the innovation challenge. The others are an antiseptic that provides up to six hours of pathogen protection and a spray-on microbial barrier that enables more breathable protective materials.

Innovations in the protective apparel designed by the Johns Hopkins team include a small cooling device that blows air into the hood; a large visor, instead of goggles, that make it easier for the healthcare worker to see (and be seen); and a more user-friendly garment removal system. Pull tabs allow the wearer to peel off the suit, replacing a 20-step process with five to six steps. Not only does this eliminate multiple contamination opportunities, but disrobing takes seconds rather than several minutes. 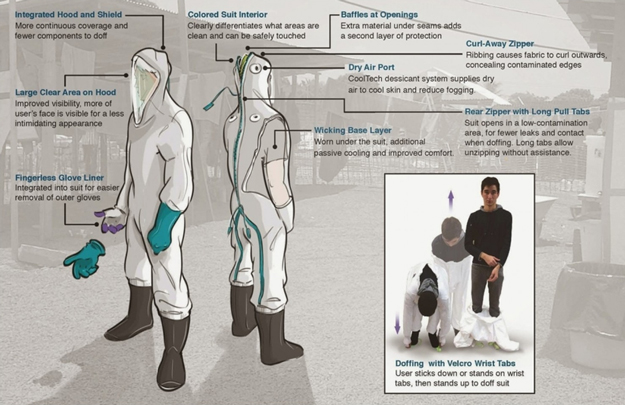 The prototype suit at New York Fashion Week uses the same lightweight material that is used in current protective gear. "It looks like, feels like thin, clear plastic," Matthew Petney, a biomedical engineer at Johns Hopkins who is working on the suit, told PlasticsToday. But the holy grail for designers working on the suit is a material that "maintains the level of protection while increasing breathability and reducing the heat burden," says Petney. Given that the entire protective suit and gear is disposable, cost is a huge factor, and the material used in the finished product may not deviate greatly from current designs developed primarily by DuPont and Kimberly-Clark.

Polycarbonate was used to fabricate the prototype shield and face mask and may make the final cut. "It's important, of course, that there be no visual distortion and that it be impermeable," says Petney. Positioning of the vents prevents fogging, he adds.

Field testing will be carried out by Jhpiego, an international health nonprofit group that is affiliated with Johns Hopkins University's Center for Bioengineering Innovation and Design. Meanwhile, USAID officials and team members are engaging with manufacturers. "Manufacturers are actively involved in the massive response as part of this particular outbreak," Wendy Taylor, who is overseeing the Ebola global competition at USAID, told the Washington Post in December. "We have real interest. We're looking at how we can fast-track the easy stuff."

Petney expects to see at least some elements of the design in the field by May. In the meantime, the team can take some comfort in the fact that the suit has passed one of the harshest tests in the world: the judgement of New York fashionistas. "Critics overwhelmingly applauded the creation for its practical design, rather than its looks," wrote the RundownLive.

Incidentally, if you're planning to attend NPE2015 in Orlando, FL, in March, you will be able to get a good look at the type of protective wear that this suit hopes to replace. SPI: The Plastics Industry Trade Association and the Flexible Vinyl Alliance will display protective equipment and a portable containment unit such as those used in Africa at the Vinyl Saves Lives booth.