This past week, at the Inside 3D Printing Conference and Expo in New York, NY, 3D Systems announced that it is introducing 3D Printing 2.0, or the "next generation" of the technology, according to Avi Reichental, CEO of 3D Systems, in an interview on Fox Business Network. He called it 2.0 because the technology is "going from expensive and complicated to inexpensive and simple."

This past week, at the Inside 3D Printing Conference and Expo in New York, NY, 3D Systems announced that it is introducing 3D Printing 2.0, or the "next generation" of the technology, according to Avi Reichental, CEO of 3D Systems, in an interview on Fox Business Network. He called it 2.0 because the technology is "going from expensive and complicated to inexpensive and simple."

Given the recent acquisition activity of 3D Systems and Stratasys Ltd.—the two giants in the 3D printing world—it seems that this time around additive manufacturing is here to stay. Reichental, at least, denies that this is a "3D printing bubble," pointing to the company's 24 new products just launched, including the third generation Cube 3D, the company's first sub-$1000 machine. The Cube 3D has faster print speeds, higher 75-micron resolution, and a multimaterial, dual-color cartridge system that is easier to load than a 2D printer cartridge. Higher speed WiFi and Bluetooth connectivity, a permanently leveled print pad, and seamless integration with the new Cubify mobile app make 3D printing easier than ever before. The Cube is expected to commence shipment during the second quarter of 2014. 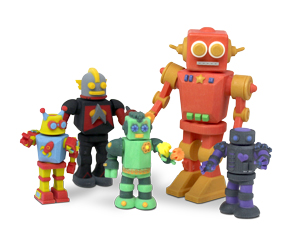 So, it appears that 3D printing is so easy a child can do it, which is what is happening. 3D Systems announced in February that it intends to "co-develop, co-venture, and deliver new immersive creative play experiences powered by 3D printing for children and their families" in partnership with global branded play company Hasbro Inc. "We believe 3D printing offers endless potential to bring incredible new play experiences for kids and we're excited to work with 3D Systems, a recognized industry leader in this space," said Hasbro President and CEO Brian Goldner.

Reichental commented, "We are thrilled to collaborate with Hasbro . . . to jointly define, shape, and lead the entire digital play space powered by 3D printing."

Competing firm Makerbot's goal is to have a 3D printer in every school classroom. They are already available in a number of retail stores, making the printers easily accessible not just to adult tinkerers, engineers, and inventors, but to children, as well.

While it all sounds so neat, Wall Street isn't quite so enamored. Analysts watching the 3D printer market have made comments recently in interviews saying the industry is "overhyped," stock valuations are "way too high," and that there is a "tech bubble in 3D," probably prompting Reichental's recent denial. One analyst called 3D printers "glorified Play Doh factories" and warned investors to "beware of 3D."

Barry Randall, writing in Smarter Investing, noted that 3D printing companies (both device manufacturers and service bureaus) "are trading at lofty premiums, based in part on what low-end devices will do to expand the market."

Those in the know say that designing products such as toys, shoes, or replacement parts for your lawnmower (see Dave Franchino's commentary in PlasticsToday) is tougher than it looks. The 3D printer might be child's play but the software is strictly for engineers. Granted there are some pretty smart kids out there who've spent all their young lives in the digital age. But it will remain to be seen if making their own action figures instead of buying them off the shelf at Toys ‘R' Us has enough appeal to excite the mass market.

Obviously most of the major players in the 3D printing industry want to build for the masses. That's the only way to make money. Many years ago, I interviewed a man who had helped invent fiberglass pultrusion technology and made his money making replacement handles for hoes, rakes, shovels, manual hedge trimmers, and more.

Time will tell where all of this is headed.