Global supplier of power and automation technologies ABB (Zürich) has announced that it will start production of robots in the United States, making it the first global industrial robotics company to fully commit to and invest in a North American robotics manufacturing footprint. The company made the announcement at the opening of a new robotics plant at an existing facility in Auburn Hills, MI. The company currently has a staff of 500 at the facility; it plans to double employment over the next five years, according to the Detroit News.

. Production is to commence immediately. 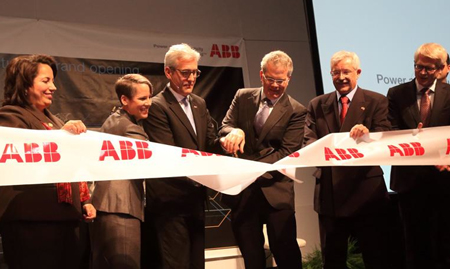 The new plant is ABB's third robotics production facility, alongside Shanghai, China, and Västerås, Sweden. It will manufacture ABB robots and related equipment for the North American market.

The company supplies systems to the life science and biotechnology sectors, along with many other industries.

The United States is ABB's largest market with $7.5 billion in sales. The company has invested more than $10 billion in local R&D, capital expenditure and acquisitions since 2010, taking local employment from 11,500 to 26,300. Continued investment in the North American value chain and manufacturing constitutes a significant part of ABB's global growth plans reflecting the company's Next Level strategy.

"Today, we are marking and celebrating the next stage of our commitment and growth in North America with the start of local robot manufacturing in Auburn Hills," said ABB CEO Ulrich Spiesshofer. "ABB is the first global automation company to open a robot manufacturing facility in the United States. Robotics is a fundamental enabler of the next level of North American industrial growth in an increasingly competitive world. With our continued commitment and investment, our local team is well positioned to support our customers with robotics solutions made in the United States."

The portfolio of products manufactured at the new facility will expand in phases, with the goal that most ABB robots and robot controllers delivered in the United States, Canada and Mexico will be manufactured in Auburn Hills. Localized manufacturing streamlines the delivery process and results in significantly reduced robot lead times for customers, said ABB.